For several years, the Munich-based communication designer and painter Martin Potsch has expressed his love for material through expressive glass vases and objects. Like other renowned artists in this genre, he transforms his ideas into tangible realities by collaborating with experienced glassblowers. For example, Korbinian and his team worked together with Stöckle in Petershagen/Gernheim during the summer and autumn of 2019. “Collaboration with Korbinian Stöckle gave a tremendous impulse to my work,” Martin Potsch enthusiastically explains. 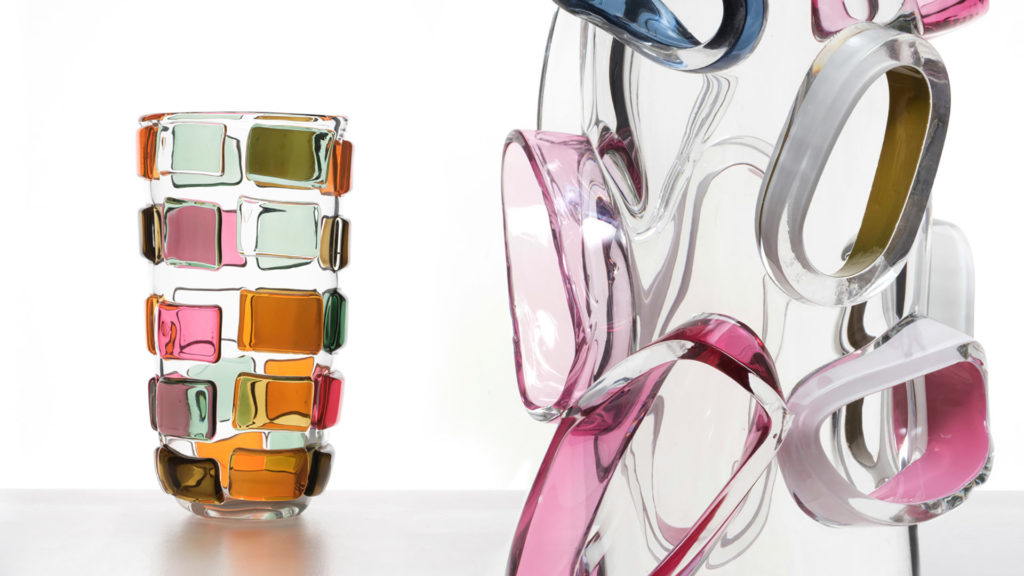 The new vase objects by Martin Potsch were created in collaboration with the team at Glasturm, Gernheim.

Korbinian Stöckle has worked since 1998 in the glass ateliers of the former glassworks at Gernheim, which is now an industrial museum. The museum’s website (www.glasturm.de) explains: “Visitors at our spacious location can vividly learn about the glass industry’s historical manufacturing conditions in their original setting.” In addition to fabricating their own series and one-of-a-kind pieces, the glassmakers’ concept also includes collaborating with extramural artists such as Martin Potsch. “This summer, we even succeeded in developing techniques that we had not yet implemented in this way and that led to surprising and hitherto unseen results in the glass,” says the Munich-based artist, who adds: “We were able to produce elaborate, large-format pieces, some of which will be on display. Potsch was able to work four times in Gernheim in 2019, most recently in October, so his most recent objects are still “warm from the kiln,” so to speak. The studio exhibition will also feature sketches and drawings of the objects.

Martin Potsch’s devotion to glass art has earned him an increasingly high degree of recognition in Munich and far beyond its gates. From the very beginning, his creations revealed a courageous use of color. Right from the start, this artist consistently strove to develop new forms of expression. Even if the colors seem organically flowing or gestural, they always remain ordered and structured. His new spatially encompassing structures are predominately based on fundamental geometric forms. In any case, these expressive vase objects go far beyond their mere functional use as containers.

After the first exhibition weekend in November, Martin Potsch reports a great response to his new glass objects. He also thanked for the publication on the Art Aurea platform. “It certainly was an important contribution to the success of the exhibition.” Also two articles in the local newspaper from the weekend had contributed, the artist wrote: “The vernissage was very nice. Good atmosphere, many design people, it was like a family reunion. In addition also some interesting contacts regarding new projects. I was particularly pleased that Korbinian Stöckle, the managing director and responsible glassmaker from Glasworks Gernheim, had been able to come.” And as far as the sales are concerned, Martin Potsch was overjoyed. ”It was great! I could not have wished better. ”

Those who are interested in outstanding glass art will have the opportunity to see the works again before Christmas on 19 December 2019.