The current show “Von der Übereinkunft der Elemente” [When All Elements Agree] features work by eight artists from the first generation after 1945, all of whom significantly shaped the development of ceramic art in Germany and expanded its scope from vessel ceramics to independent art objects and sculpture. Each artist accomplished this in their own way, although six of them are couples: the sculptor and ceramist Klaus Lehmann (1927-2016) and his first wife Signe Pistorius-Lehmann (1925-2012), Karl Scheid (1929-2019) and Ursula Scheid (1932-2008), and Gerald Weigel (1925-2019) and Gotlind Weigel (*1932). Works by Beate Kuhn (1927-2015) and Franz Josef Altenburg (1941-2021) complete the spectrum. 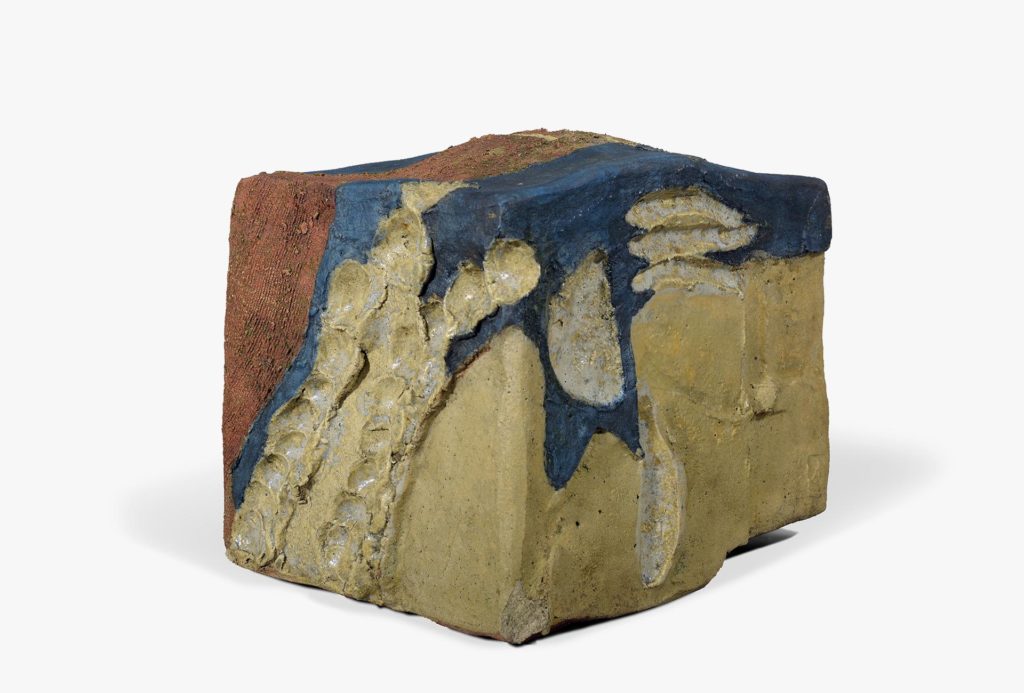 The Scheids, the Weigels, and Beate Kuhn became internationally known as the London Group after an exhibition at Henry Rothschild’s Primavera Gallery in London in 1968. Margarete Schott also exhibited at this event. Ursula and Karl Scheid initially focused on decoration and ornament in their vessels, but their earlier floral patterns were followed by more geometric decorations and forms. In his late work, Karl Scheid designed spatial bodies assembled with the utmost precision from individual slabs, often in pairs or in larger, symmetrically ordered groups. The constructive precision and colorful accentuation of the glaze brought these ceramic objects into proximity with Concrete Art. 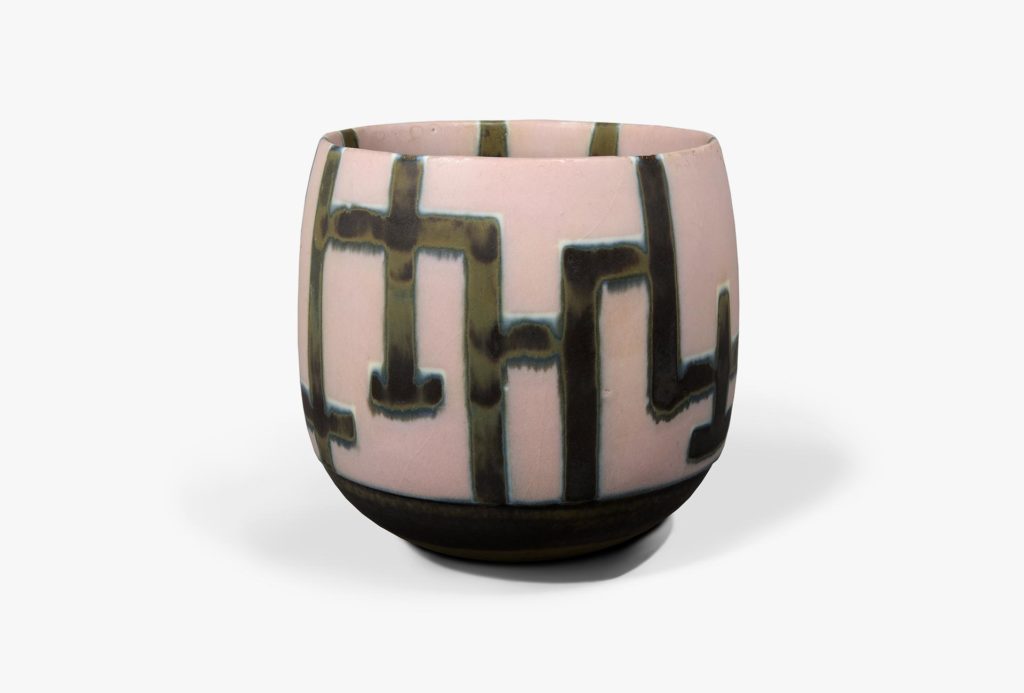 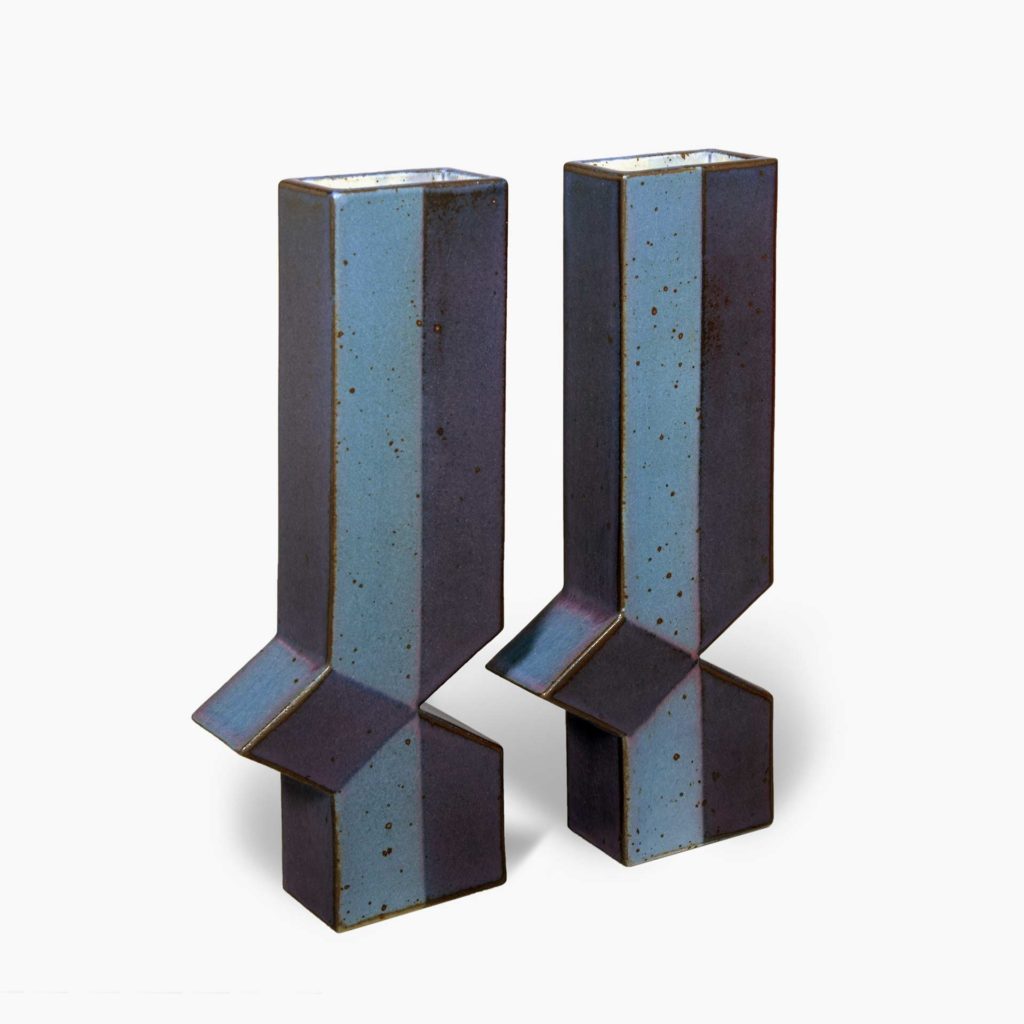 Vessel forms and objects by Gotlind and Gerald Weigel are likewise diverse and sometimes surprisingly original. Gotlind Weigel cites the ideas of the Bauhaus as formative for her youth and later education. Yet it is not the 90° angle, but “the swinging line” that runs through her work like a connective thread. Gerald Weigel began as a maker of utilitarian ceramics, but soon found inspiration in stone forms and rock formations. “It is important for me to say that this is not about imitating stones. All of my pieces are built from fireclay stoneware clay. The results are predominantly double-walled objects whose surfaces are modeled and treated with oxides and engobes.” The preceding quote and more can be read on the website of Gruppe 83, an association of German ceramic artists to which Gotlind and her husband Gerald Weigel belonged. 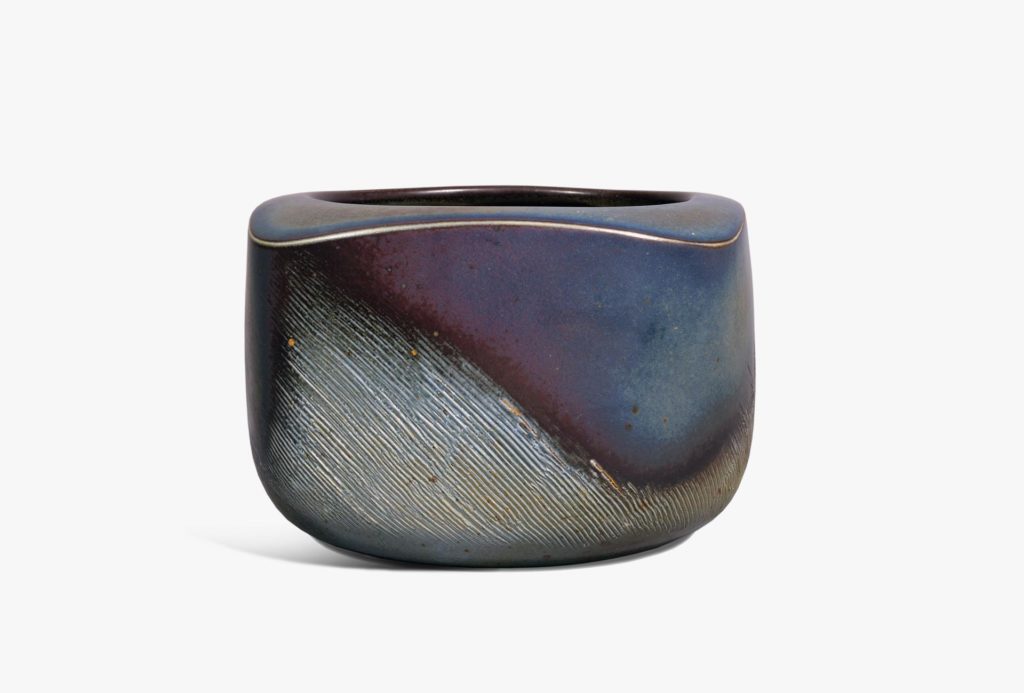 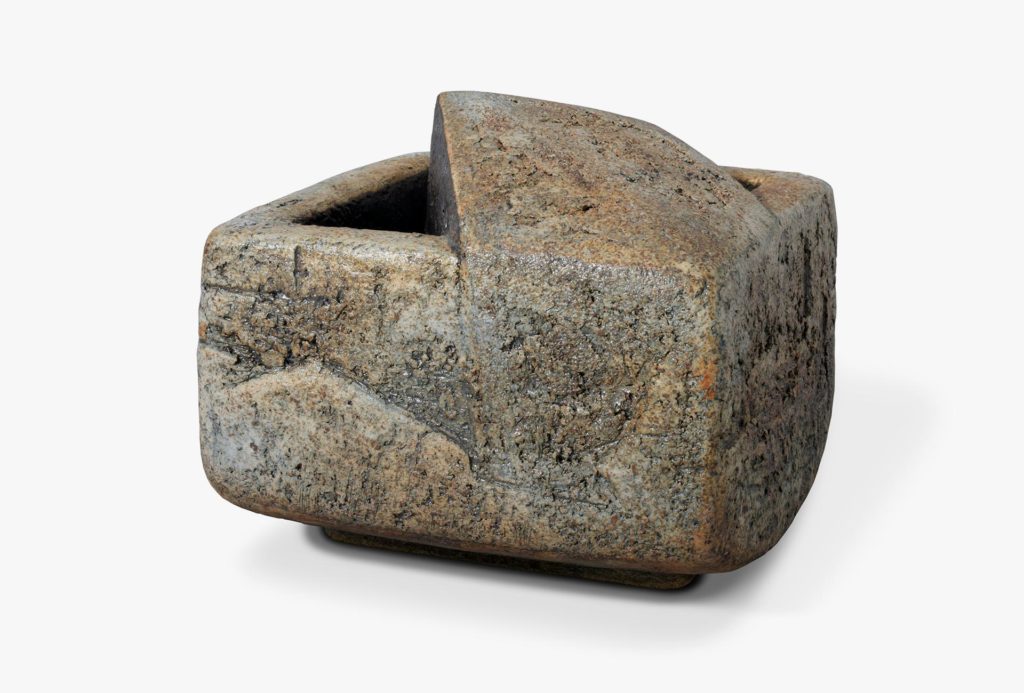 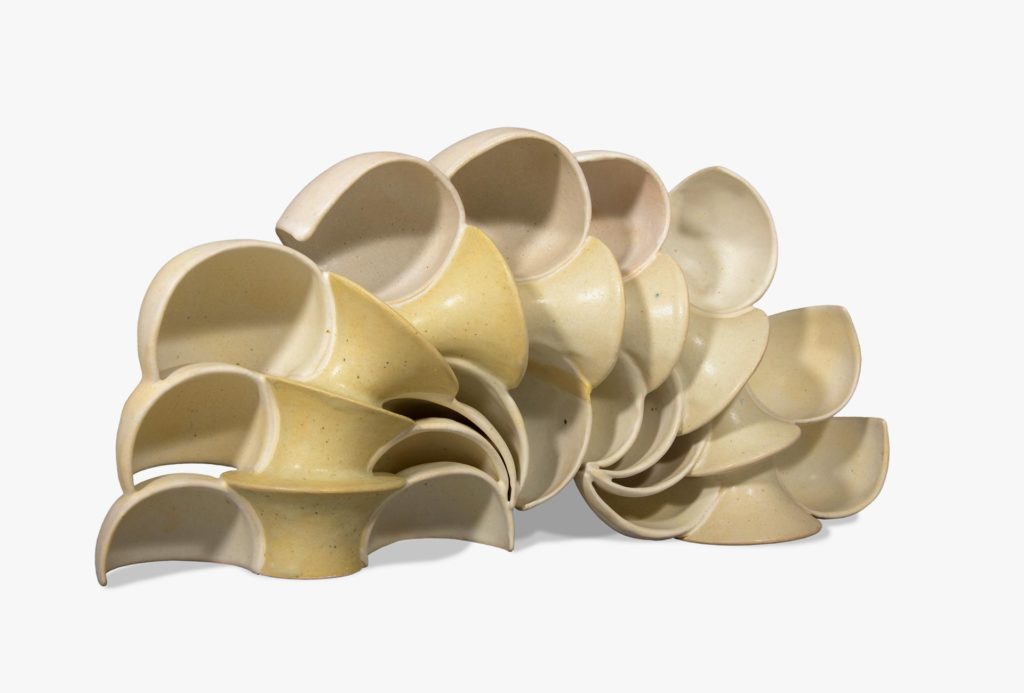 After studying at the Werkkunstschule in Kassel, Klaus Lehmann turned away from vessel ceramics in the early 1960s and afterwards worked sculpturally with clay. Author Roland Held classified Lehmann’s cubic objects as Minimal Art, which Lehmann “deftly combined to create objects with strong tactile appeal.” Lehmann used the term “container” to describe his geometric bodies, which are open at the sides or the top and colored in iridescent earth tones. Held notes that Lehmann felt a kinship with “his colleagues in the genre of Concrete Art.” Lehmann’s late work is quite different: it consists primarily of sculptural, monochrome objects. The amorphous surfaces of these sculptures, which are difficult to interpret, show relationships to the works of Giacometti, but do not depict recognizable figurative abstractions of people or animals. 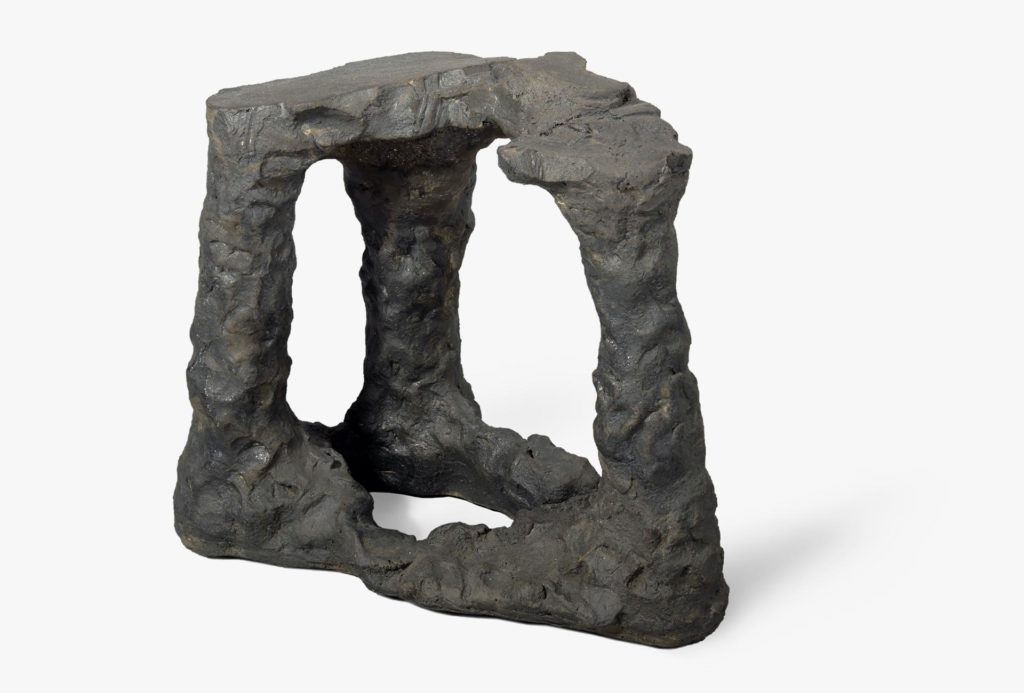 Franz Josef Altenburg’s geometric grid structures, stacks and frames are reminiscent of architectural models. Altenburg’s lifework was honored with a solo exhibition at the Museum für Angewandte Kunst in Vienna shortly before his death in the fall of 2021. Curator Rainald Franz described Altenburg as the most important living ceramist in Austria. The video shot on this occasion offers exciting insights into Altenburg’s work and records what are very likely the last documented public statements by this ceramic artist, who was already seriously ill at the time. 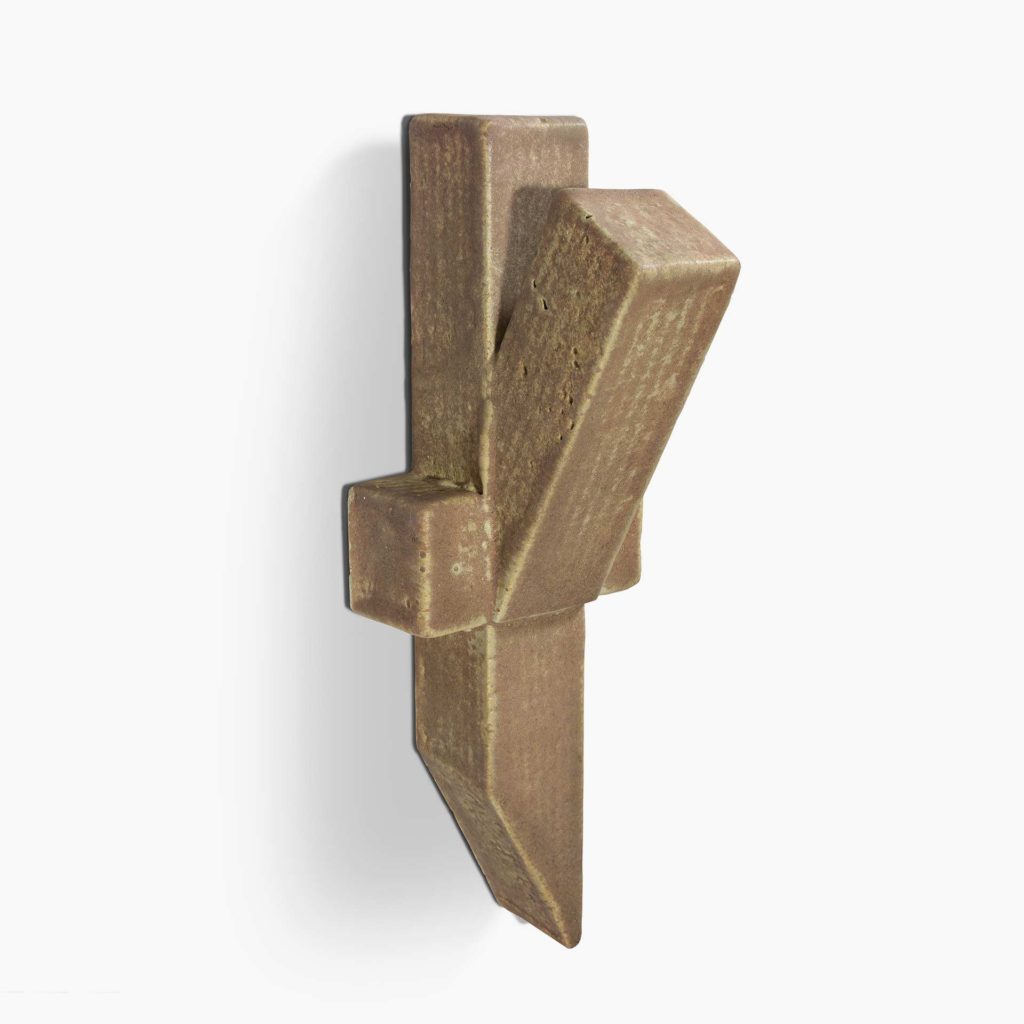 “I want to show the artistic development of each artist, also with the associated temporal references, as well as their differences,” gallery owner Angelika Metzger explains. In contrast to the bodies of the vessels, she feels that the sculptural aspect of the works is particularly important. The current exhibition accordingly presents a cross-section of ceramic creativity in Germany and Austria from the 1960s onwards. These pieces set standards that are still valid today. Their topicality becomes clear, Angelika Metzger adds, “if you simply look at the latest auctions or notice that even young ceramists are occupying themselves with the work of an artist like Klaus Lehmann, for example.”