Ceramic sculptures by Roger and Jacotte Capron are cheerfully colorful and characterized by the carefree southern French lifestyle. Most of the sculptures depict bizarre female figures, their bodies sometimes cubistically dissected, merged with animal shapes or elongated like insects. Galerie de la Perle Noire in Agde, southern France, is now dedicating an exhibition to this French artist couple. Roger Capron, born in 1922, studied applied art in Paris. After teaching for a short time, he opened the Atelier Callis in 1946 in Vallauris, a small town in the hills near Cannes that has been known as a ceramics center since the 16th century. In addition to his poetically caricatured sculptures of women and animals, he also made vases, lamps and other utilitarian objects between 1947 and 1950. Pablo Picasso came to Vallauris in 1948 and remained there for seven years, exerting a long-lasting influence on ceramic art in the town. Picasso became a role model and friend for Roger Capron. Together with other young ceramists who enthusiastically took up Picasso’s impulses, Capron tested not only artistic forms but also new firing techniques and glazes. 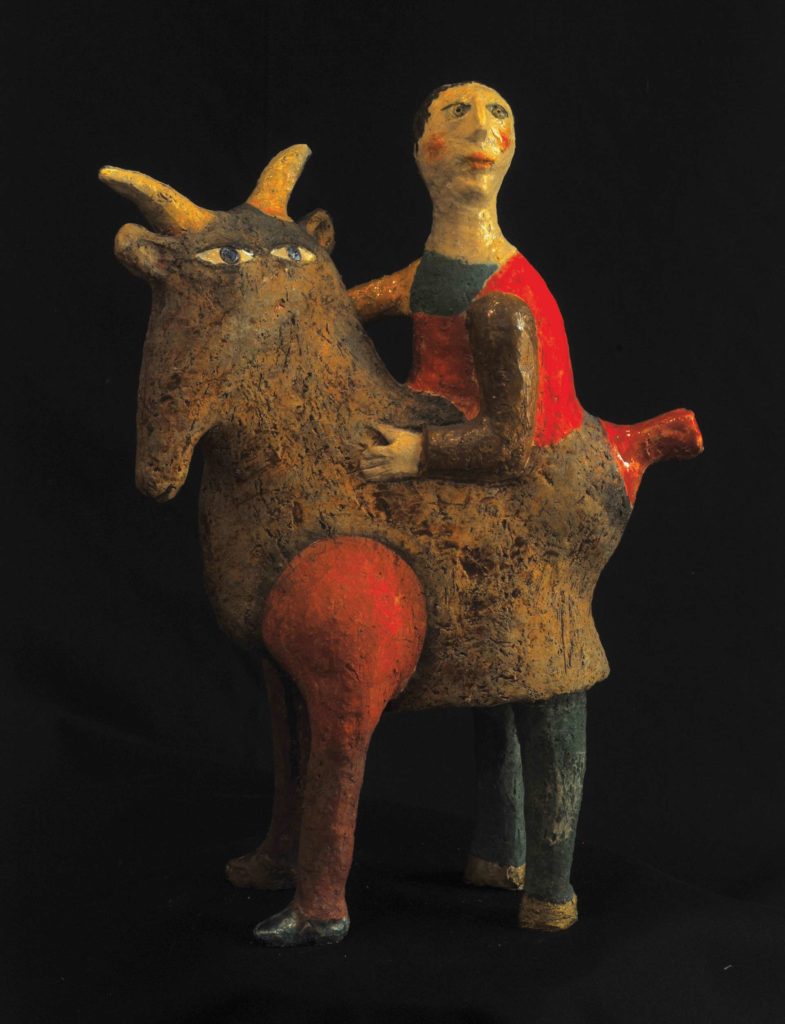 Ceramic sculpture by Roger and Jacotte Capron. The influence of Pablo Picasso, with whom the artist couple was friends, is clearly visible here. Photo Philippe Capron.

Roger Capron opened the Poterie du Font des Horts in 1952. Guided by the concept of well-designed serial products as promulgated by the Bauhaus, he and his employees serially manufactured decorative and utilitarian objects. Artistically decorated tiles and wall objects were added to the roster of products after Roger Capron married his wife Jacotte in 1955. An alumna of an art school, she soon became his closest collaborator, devoting herself mainly to creating the color schemes. In the 1950s, Roger and Jacotte Capron also established themselves internationally with the production of furniture and art objects made of ceramics. Their creations won numerous awards: e.g. the gold medal at the tenth Triennale in Milan in 1954, followed by the international grand prize for ceramics in Brussels in 1959 and 1970. 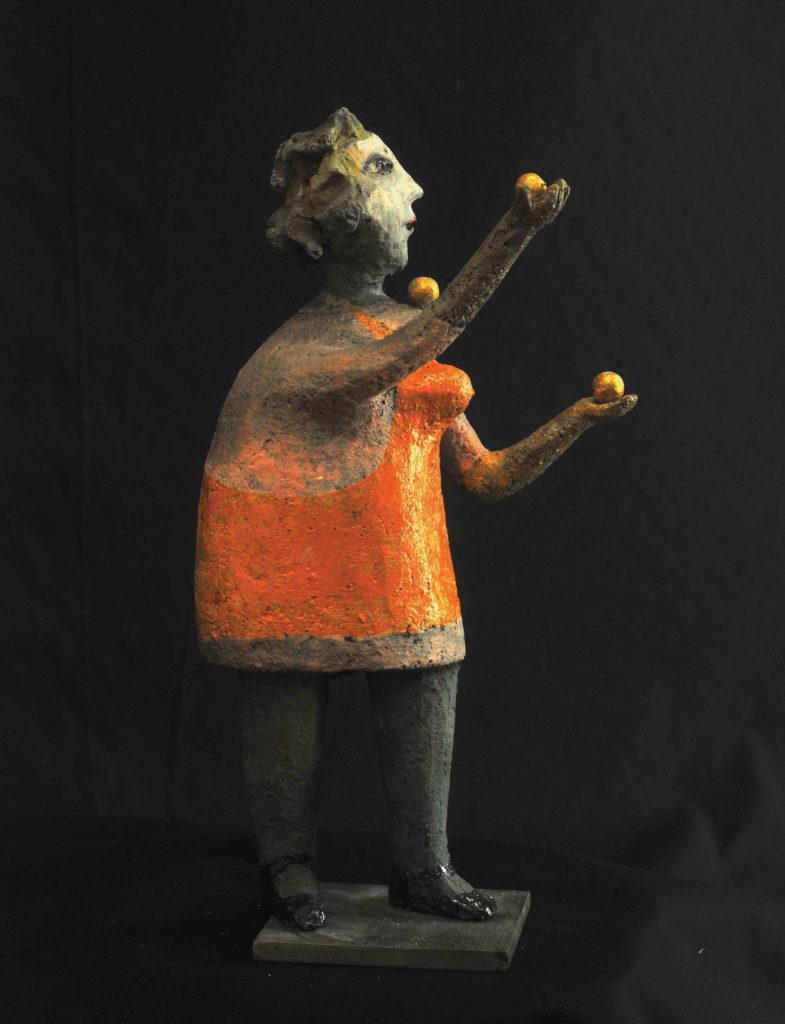 In 2003, the Musée national de Céramique-Sèvres in Paris dedicated a retrospective to “Les Capron” for their remarkable artistic production. The New York Times described Roger Capron as “one of the most prolific and important craftsmen of postwar Europe.” In Vallauris, and together with his wife Jacotte, he co-invented the aesthetic of the 1950s, which was inspired by the ceramic tradition of the Mediterranean region. Roger Capron also earned a name for himself in architecture with his design of a harbor building in Cannes in 1958. In the same year, he was awarded the gold medal for architectural ceramics in Brussels. Commissions for the Théâtre de Nîmes, the Hôtel Byblos in St. Tropez, for restaurants and public buildings followed. The Caprons’ manufactory employed up to 120 people. In addition to tiles, tables and cupboards were also fabricated according to designs conceived by Roger and Jacotte Capron. 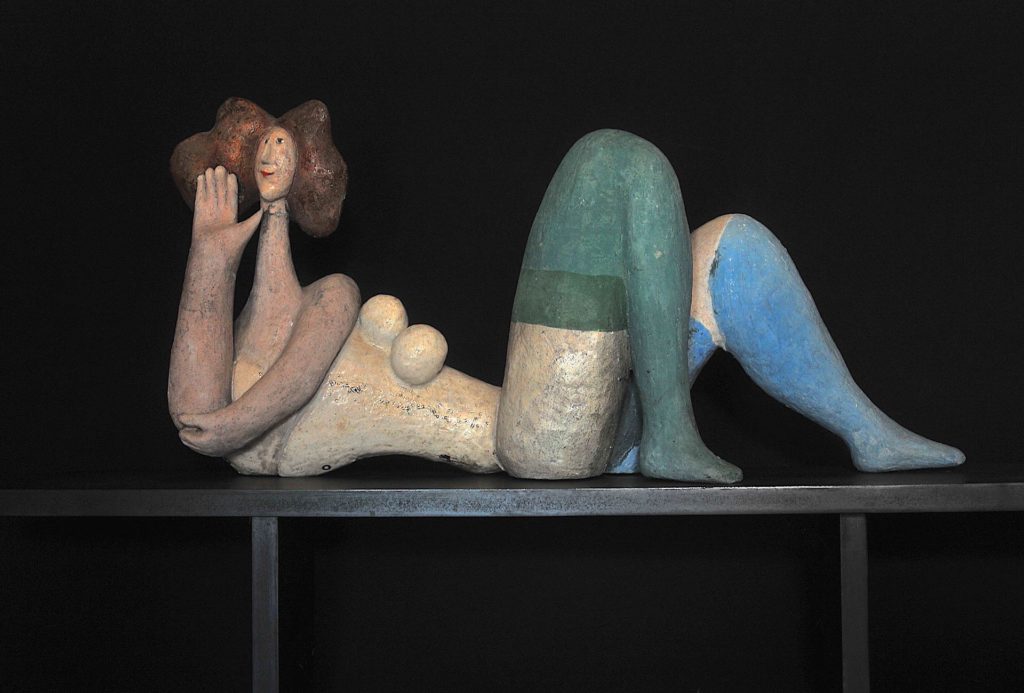 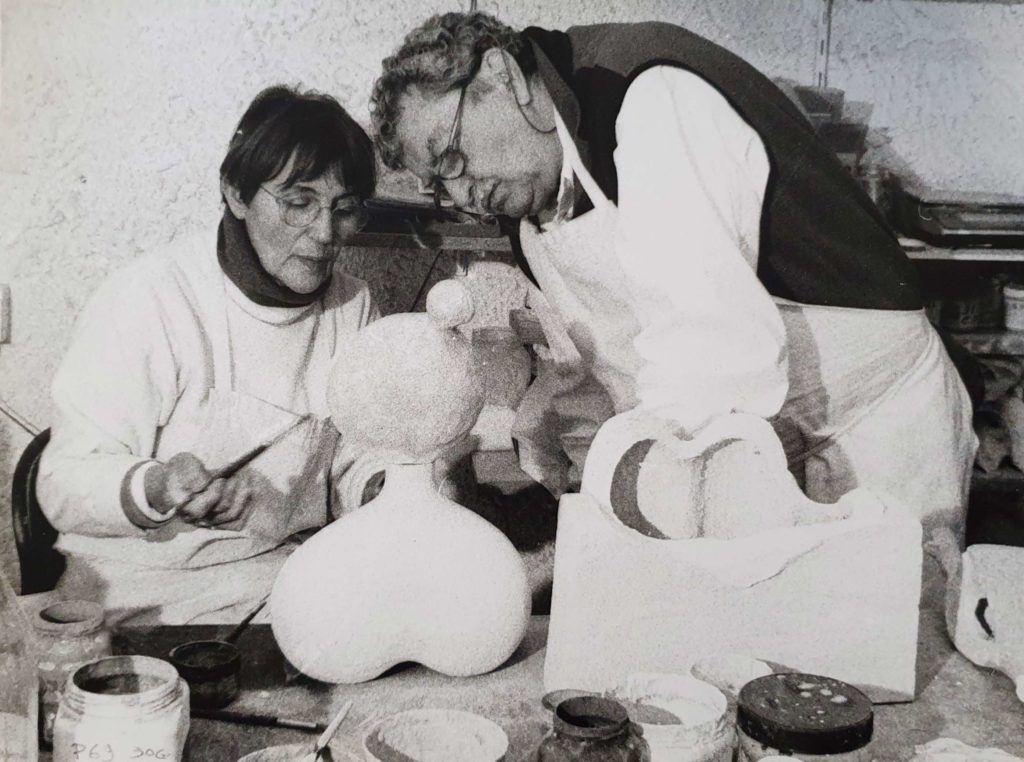 After their marriage, Jacotte and Roger Capron began a long artistic collaboration. Here in their studio in the southern French ceramic town of Vallauris. © Photo Jack Boland.

Roger Capron’s sculptures can also be seen in public gardens and indoor spaces. They are present there thanks to Reinhold Harsch, a tile entrepreneur and art collector from Ebersbach near Göppingen. Roger Capron had long dreamed of expanding his sculptures into larger dimensions. Reinhold Harsch had the idea of casting them in concrete. He chose a few pieces from his collection, had them enlarged and arranged for molds to be made in his company. Assisted by her grandson Louis, Jacotte Capron visited the Harsch company several times to color the large-format creations. Beginning in 1994, Reinhold Harsch initiated a series of thirteen exhibitions featuring works by Pablo Picasso’s contemporary and personal friend. Roger Capron died in 2006.

Curated by Agence Lemignot, the current exhibition at Galerie de la Perle Noire in Agde calls attention to an artistic epoch between the 1950s and ’70s in the south of France, a time and place characterized by the desire for poetic, playful lightness after the horrors of the Second World War. The gallery in the heart of the old town is also the starting point for a visit to the approximately thirty artists’ workshops in the center of Agde. With exemplary support from the regional administration (the Communauté d’Agglomération Hérault Méditerranée), the historic old town, which had long been languishing, has now been rejuvenated with new cultural life through the presence of art and crafts.