Inspired by her conviction that art is vital to life, Angelika Metzger founded her gallery in Johannesberg near Aschaffenburg in 1996. The focus is on ceramics ranging from artistically designed vessels to sculptural artworks.
The show “GefäßErweiterung” [Vessel Expansion] includes classic names in German studio ceramics such as Beate Kuhn, Karl and Ursula Scheid or Gerald and Gotlind Weigel; renowned international artists such as Arnold Annen, Jean-François Thiérion, Xavier Toubes, Julian Stair and Rachel Wood; and sought-after up-and-coming stars such as Mimi Joung and Johannes Nagel. What all have in common, says Angelika Metzger, is that they “developed the vessel in different ways in the direction of a free, non-functional object.” The following text, which she wrote for her “Vascular Dilation” exhibition, explains the important role that ceramic art plays in the Metzger’s daily life. 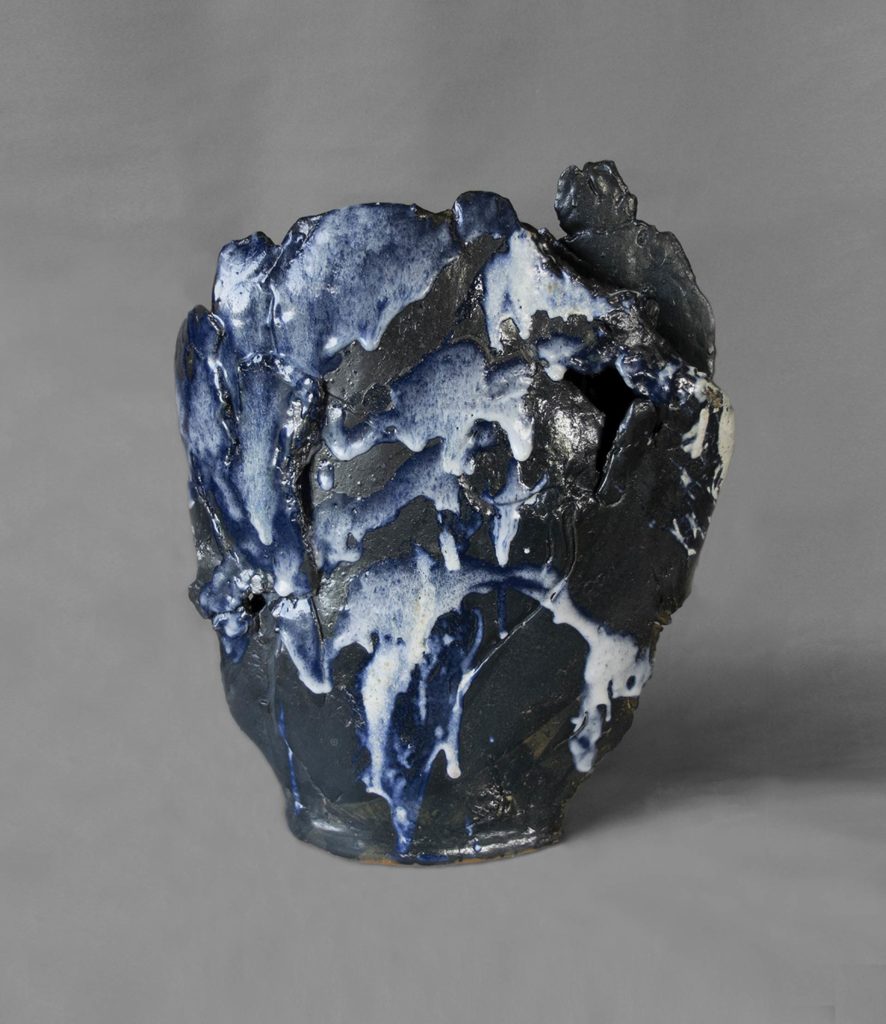 “I love the vessels in our home. Some I use regularly, others I bought only because of their unconventionality. It’s a pleasure to choose one or another cup or mug for my morning coffee. Do I want the cup warm my hands today or should it simply be crowned with milk foam? Bowls and vases likewise enrich my everyday life, each in its own special way.

Vessels have been essential parts of cultural history for millennia, so it’s not surprising that anatomical terms such as “foot,” “belly,” “shoulder” and “neck” are used to describe the shapes and parts of vessels. Vessels were used to store supplies, for safekeeping of sacrificial offerings, to keep foods cool and to transport them. Nowadays they’re most often used at mealtimes or as containers for plants. From earliest cultures to the present day, the makers of vessels tried and try to unite usefulness and beauty. The urge to create something sublime can be traced to prehistoric times. 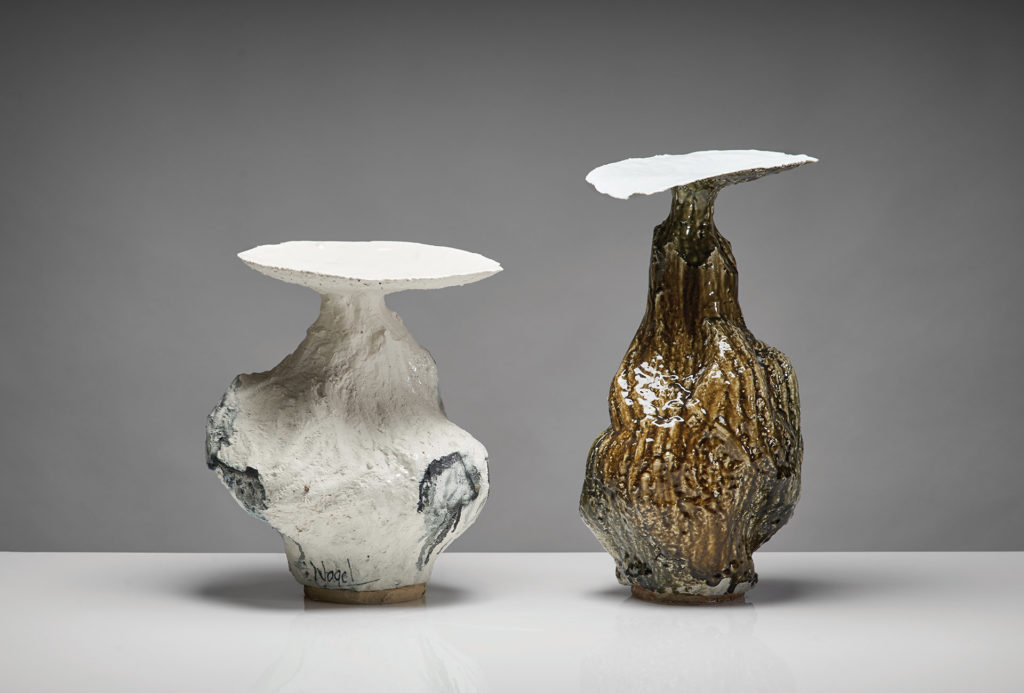 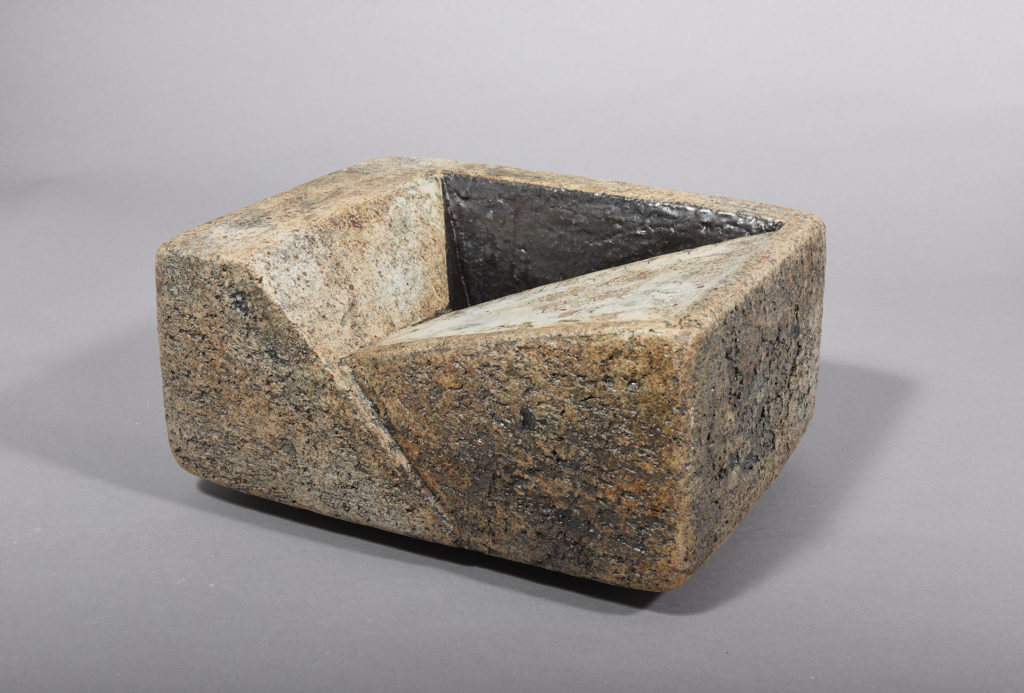 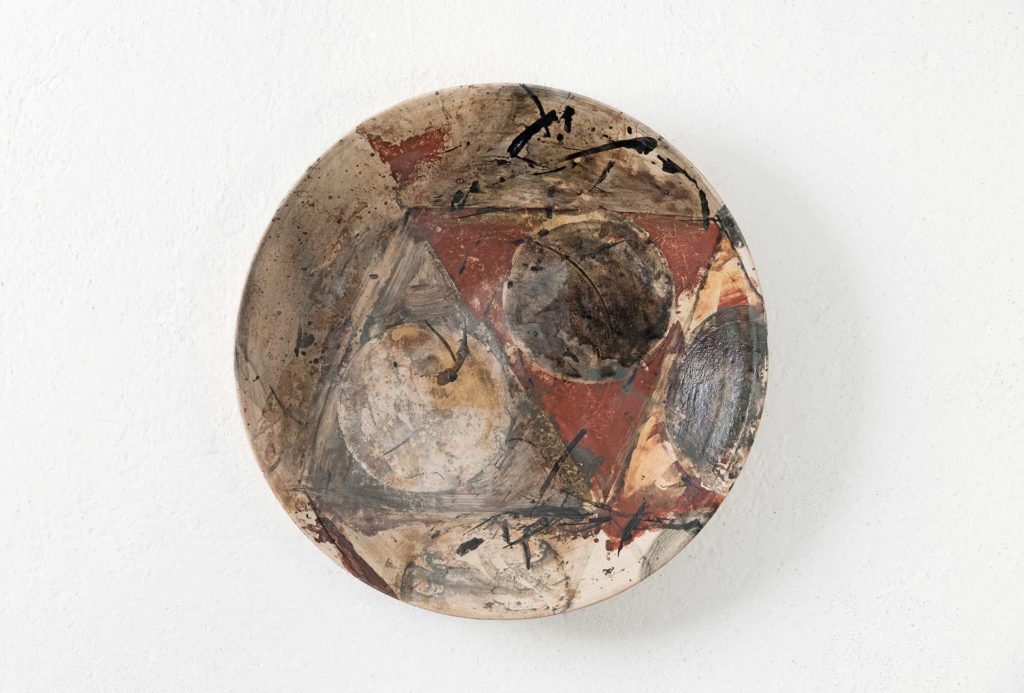 My “Vessel Expansion” show presents works by 22 international artists. For visitors, it’s like a voyage of discovery through the recent past and present of ceramic art. Visitors can sensually experience many different glazes and surface textures on kiln-fired ceramic objects. I also show the growing artistic freedom in the design of these objects. The historical beginning is embodied by a small Art Nouveau vessel with floral decoration by Max Laeuger, who made it at the Majolika Manufacture in Karlsruhe. It’s followed by examples of German studio ceramics: perfectly shaped pieces with geometric décor by Ursula Scheid, an almost architectural group by Karl Scheid, and pieces with special surface textures made by Gotlind Weigel in the 1990s. For a long time, the ultimate goal was to create perfectly shaped vessels with masterfully finished surfaces. But in the meantime, the concepts and forms have become freer. This can be seen in numerous items on display. 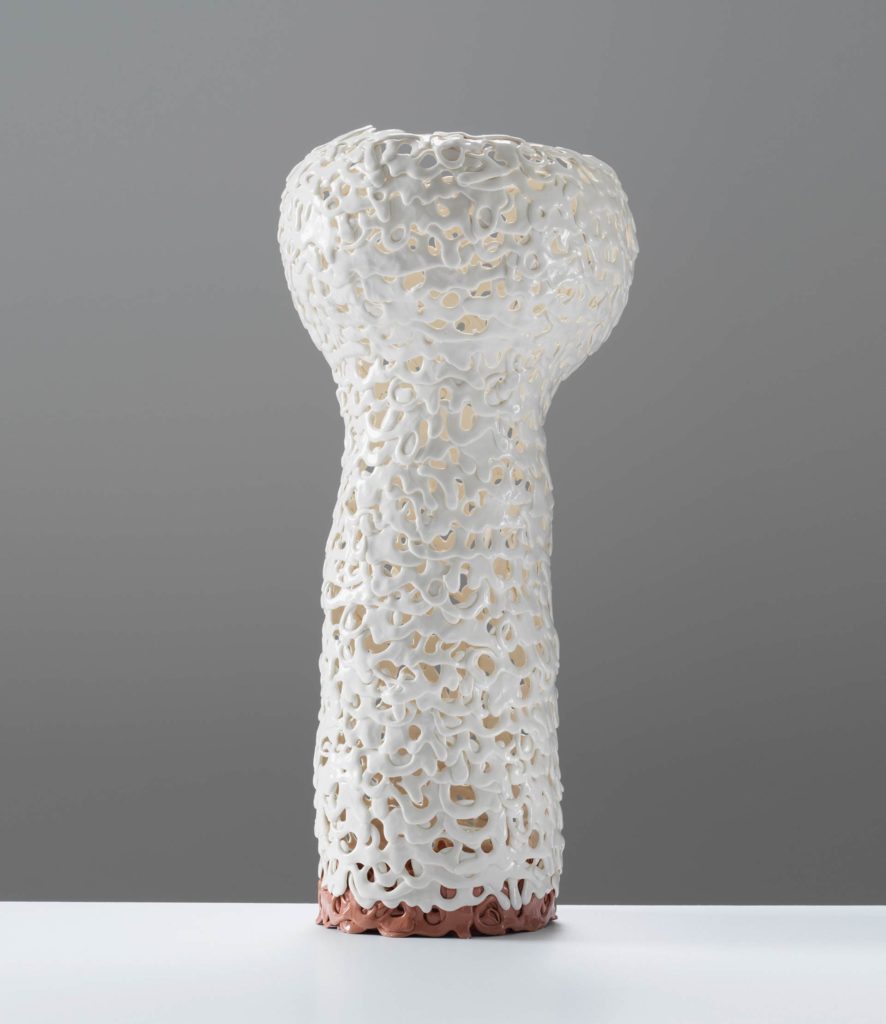 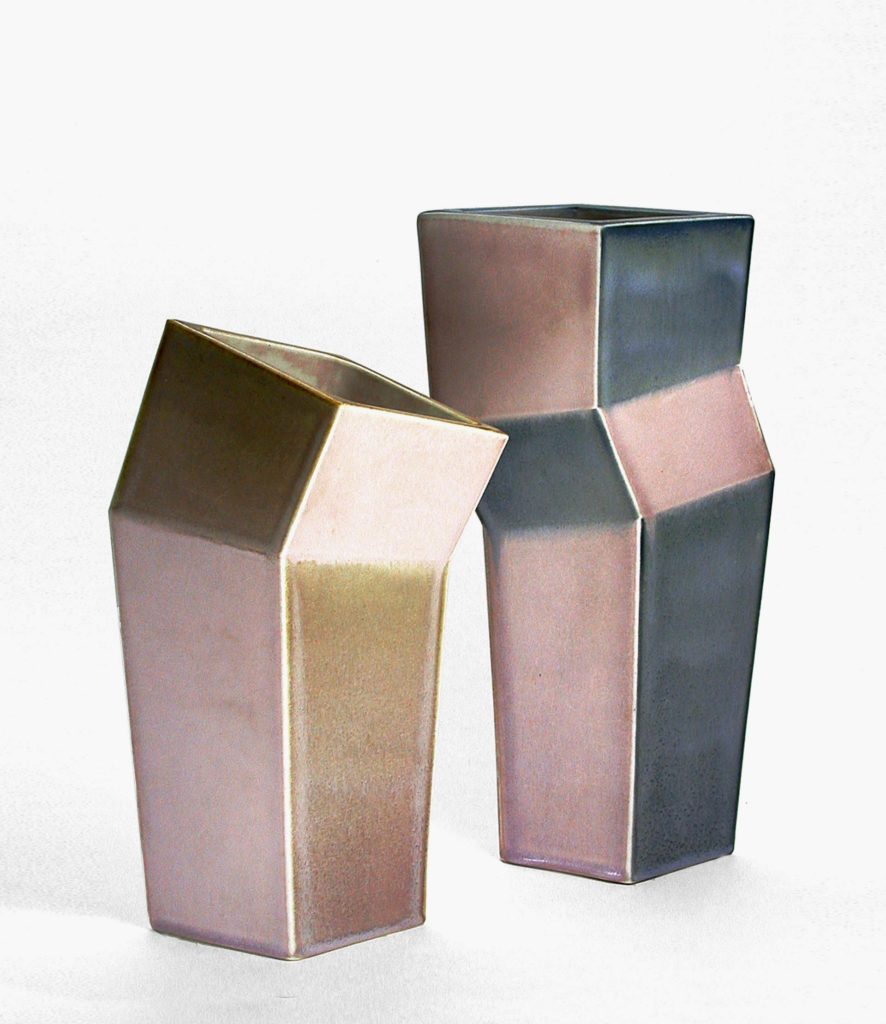 Hervé Rousseau, for example, works with full bodily commitment. Fingerprints and footprints can be touched on his gestural, wood-fired plates and vessels, which make a statement for characteristically French joie de vivre. Johannes Nagel digs cavities in sand and fills them with liquid plaster. His ceramics correspond to spontaneous gestures cast in what he describes as “sculptural blurriness.” Julian Stair often positions his vessels, either individually or in groups, atop consoles and pedestals, thus allowing relationships and minimal contrasts in color and form to become visible. Everyday artifacts such as teapots and cups for tea or coffee appear as attractive objects. Love of vessels unites all of the participating artists and runs through the entire exhibition.” 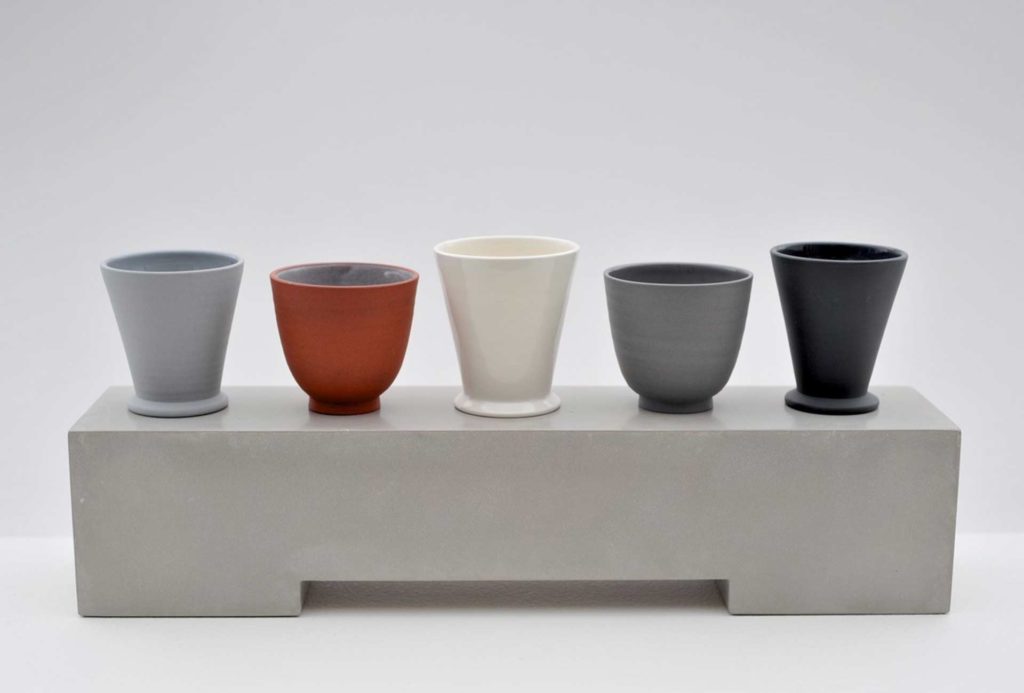 The British ceramic artist Julian Stair will come to the opening in the Galerie Metzger. Cup shapes on pedestal.