Ulrike Isensee from Hamburg has long since been known for her highly imaginative handwoven scarves and shawls. Her new room dividers, wall objects, assemblages and woven fabrics constitute a textile-themed attempt at approaching the Bauhaus’ weaving tradition, and a tribute to its women weavers. Ulrike Isensee takes part in the Hamburg Architecture Summer 2019 with the showcase exhibition “Networked”. We talked to the weaver about her Bauhaus homage. 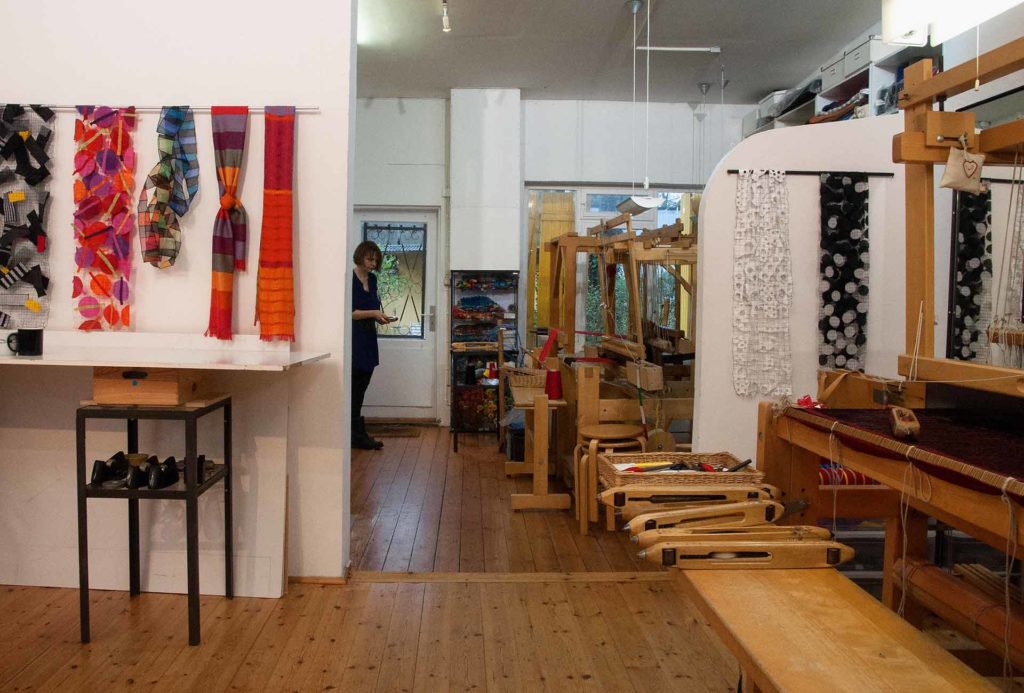 Ulrike Isensee at her studio in Hamburg. 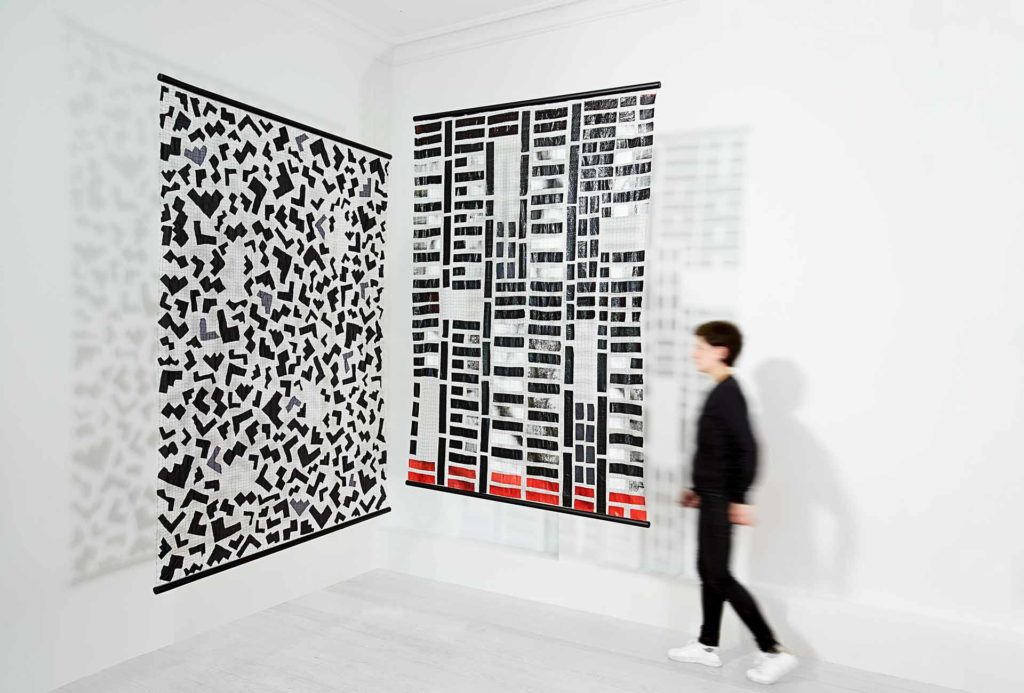 Alongside creating her scarves, Ulrike Isensee has been exploring and experimenting with wall objects and room dividers for quite some time now. Photo: Vier Fotografen.

Art Aurea To mark the anniversary of the Bauhaus’ founding 100 years ago, you are creating a variety of objects at your workshop as a tribute to the Bauhaus’ women weavers. How did this come about?

Ulrike Isensee The Bauhaus revolutionized and lastingly modernized textile surface design. Since the female students were advised to continue their training in the textile workshop after completion of their basic studies, most of the students there were women. For my project, I decided to reinterpret works by Anni Albers, Gunta Stölzl, Ruth Holl and others, using contemporary techniques and materials.

AA You studied at Hamburg’s University of Fine Arts from 1973 to 1979. Afterwards, you trained as a handweaver and, after obtaining your journeywoman’s certificate, you also earned the title of Master Handweaver. Since when have you been exploring the Bauhaus as a theme?

UI Since I started to work as a freelance weaver in the early 1980s. Austerely geometrical designs are predestined to be used for woven fabrics because the warp and weft threads are also interlaced at a right angle. Using the inlay weaving technique, I created scarves featuring woven graphical segments.My new assemblages, wall objects and room dividers connote the Bauhaus’ fundamental design concepts. I craft them from geometrical elements, made of diverse materials, that I affix to a delicate mesh.

AA In the 1950s, Anni Albers gave up working as a freelance weaver and henceforth worked as a graphic artist and designer for Florence Knoll. Why have you never been interested in creating designs for the industrial sector?

UI In the 1950s, people still strongly believed that industrial production could satisfy all human needs. Reverting to manual work as an autonomous way of life and an alternative manufacturing method, as can be witnessed nowadays in some areas, was considered outmoded back then.

AA What do you find particularly interesting about Anni Albers, who succeeded Gunta Stölzl as head of the weaving workshop at the Bauhaus in Dessau in 1931?

UI The first project within the context of my Bauhaus tribute references the weavings that Anni Albers created herself in Dessau, which were inspired very much by the Bauhaus’ austere design concepts. Anni Albers’ graduation piece was a fabric made of cellophane and cotton for the windows of an auditorium. It was a trailblazing piece back then due to the innovative material combination. I am fascinated by her experimentation with weaving techniques and materials, which was truly groundbreaking. 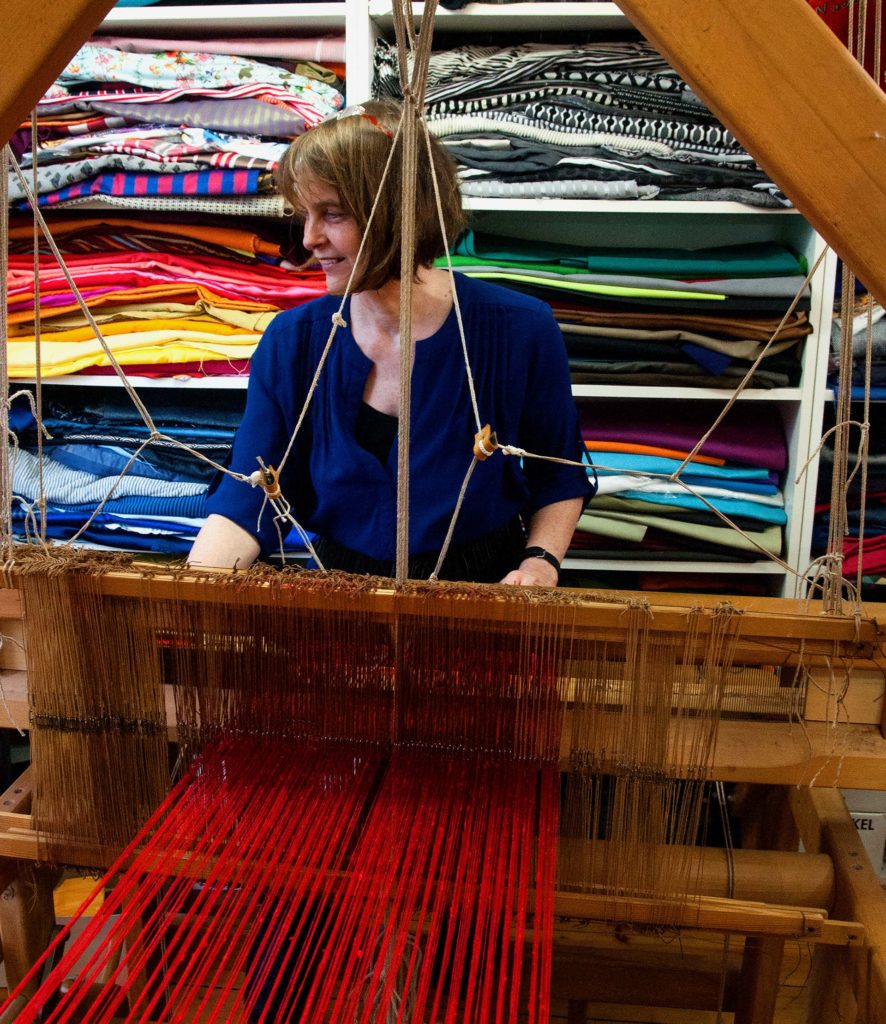 Ulrike Isensee: “Nowadays, in our digital era, I notice people re-appreciating the importance of artisanal work and realizing that it is worth preserving.“

AA So far, you’ve been known mainly for your highly imaginative handwoven scarves and shawls. Your tribute to the Bauhaus weavers involves wall objects, i.e. is about their impact on a room’s ambience. Isn’t this an entirely new theme for you?

UI Alongside creating my scarves, I have been exploring and experimenting with wall objects and room dividers for quite some time now. I find it exciting to translate my artistic ideas into textile pictorial artworks on a larger scale, even if I’m leaving the applied arts genre in so doing. It started in 2003 with a kimono project. I used the clear-cut shape of a kimono as a projection screen for different textile techniques. I also began to concern myself with recycling, repurposing used textiles. From 2012 to 2014, I wove and sewed different materials, which can be regarded as carriers of “memories”, into textile surfaces. In 2014, I was awarded the Lotte Hofmann Memorial Award for Textile Art.

AA You set up your atelier in Hamburg in 1983 and have been working as an artistic craftsperson ever since. How has people’s appreciation of your works, and of the applied arts in general, changed over the past few decades?

UI Initially, my customers’ focus was mainly on craftsmanship. Back then, people were deeply fascinated by independent, non-alienated work. Several years later, my customers were attaching progressively less importance to whether a piece was handcrafted or not. They were interested above all in its design and style, but not in the crafting process involved. Nowadays, in our digital era, I notice people re-appreciating the importance of artisanal work and realizing that it is worth preserving. Traditional crafting expertise, such as in weaving techniques, which requires experience and skill in working the materials, exerts a certain fascination. Nowadays, people are becoming increasingly aware again of the value of an artisanal culture.

“Vernetzt“ – A Showcase exhibition in the context of the Hamburg architectural summer 2019. More about Ulrike Isensee with photo gallery.