In the pottery world, the concept of simplicity is all too readily associated with functionality: the simplest form makes for optimum utility. Emil Heger’s creations, however, demonstrate that even highly complex, abstract ideas can be self-evidently reified in simple, wheel-thrown shapes and also appeal to our senses. Whereas useful items are usually small and practical, Heger consciously applies the tricks of his trade to craft objects in rather unusual dimensions. Nevertheless, this ceramicist, who was born in 1961, never creates his pieces to merely exemplify his concepts. Quite on the contrary, their exaggerated yet captivating physical presence does not reveal anything of what sparks his love and passion for ceramics time and again. Heger’s transcending the usual dimensions as if in an attempt at liberation makes us realize that this potter works on the borderline between two worlds and two genres. What definitely applies to his work is what the late Walter Popp, one of the greats on the German pottery scene, once said about modernist ceramics: “Ceramic objects are not created from ceramic materials alone….” 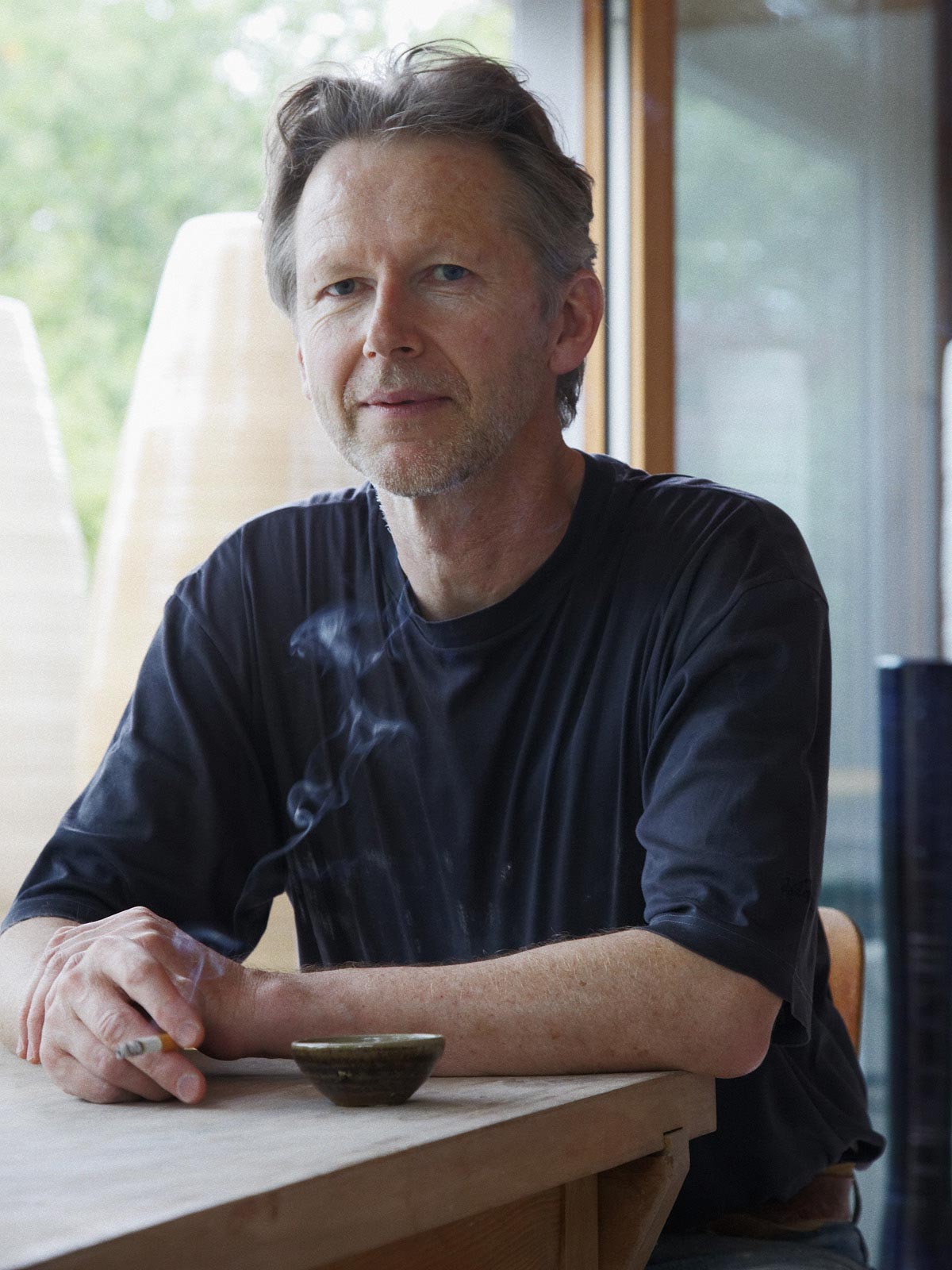 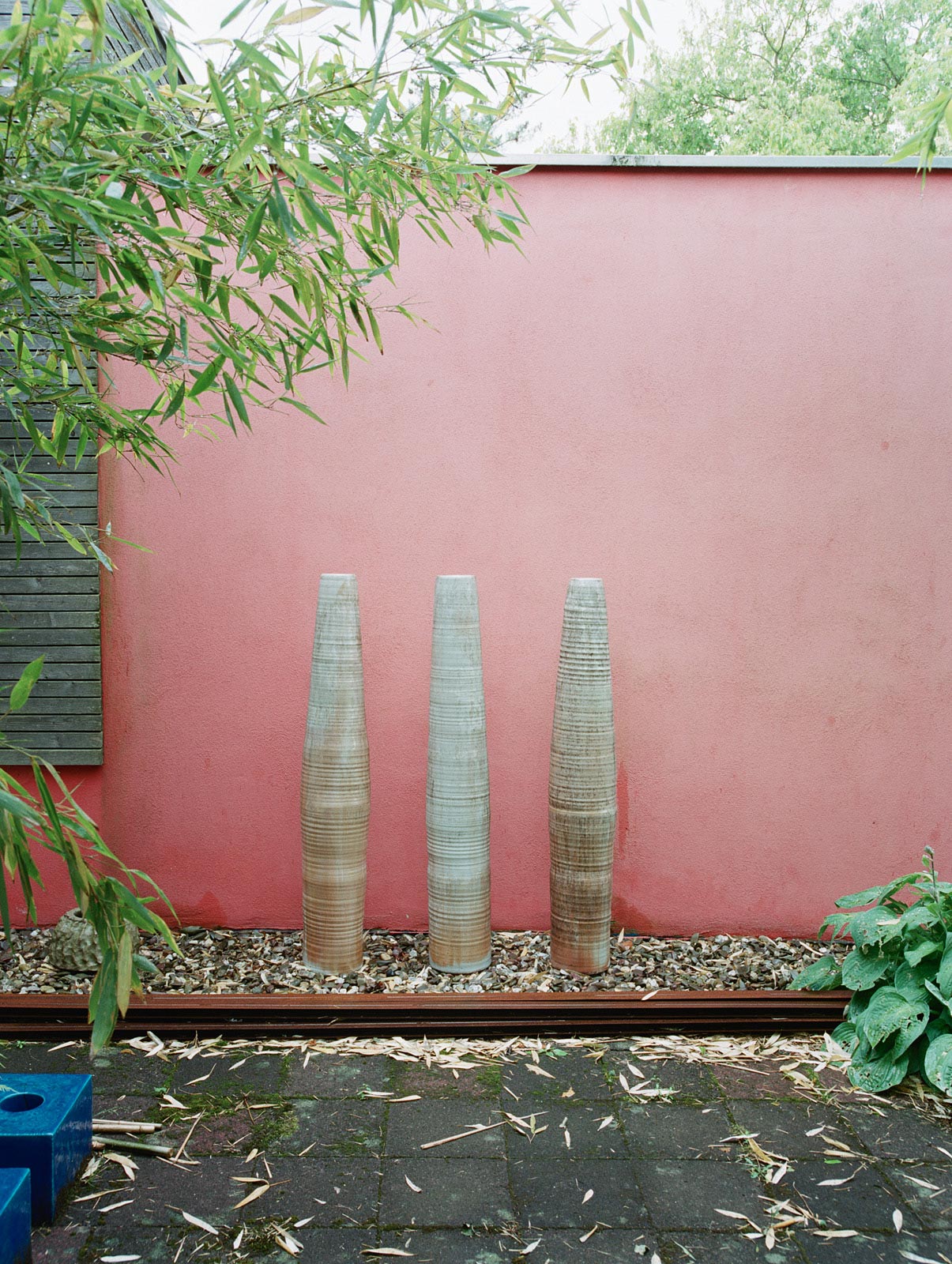 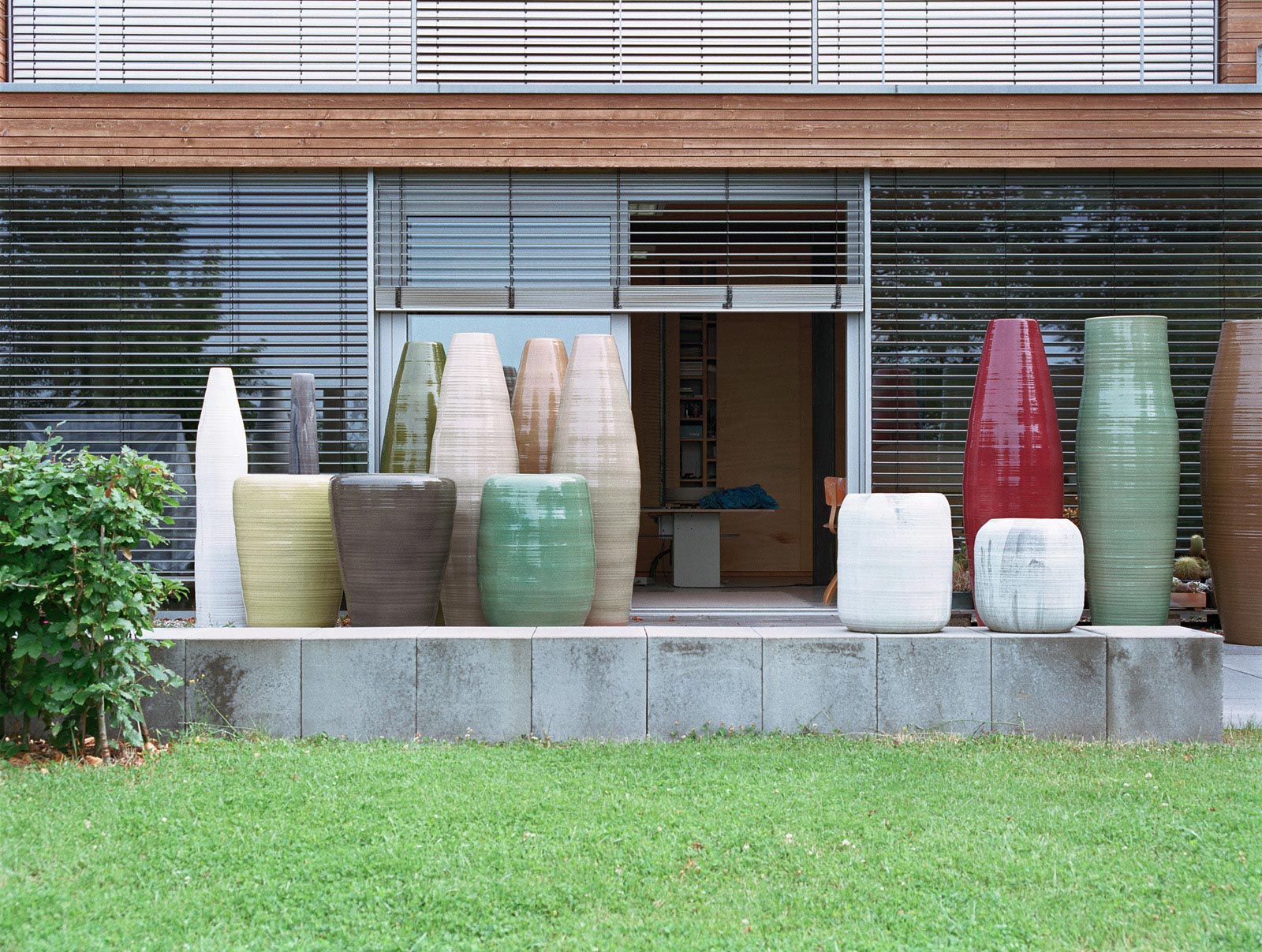 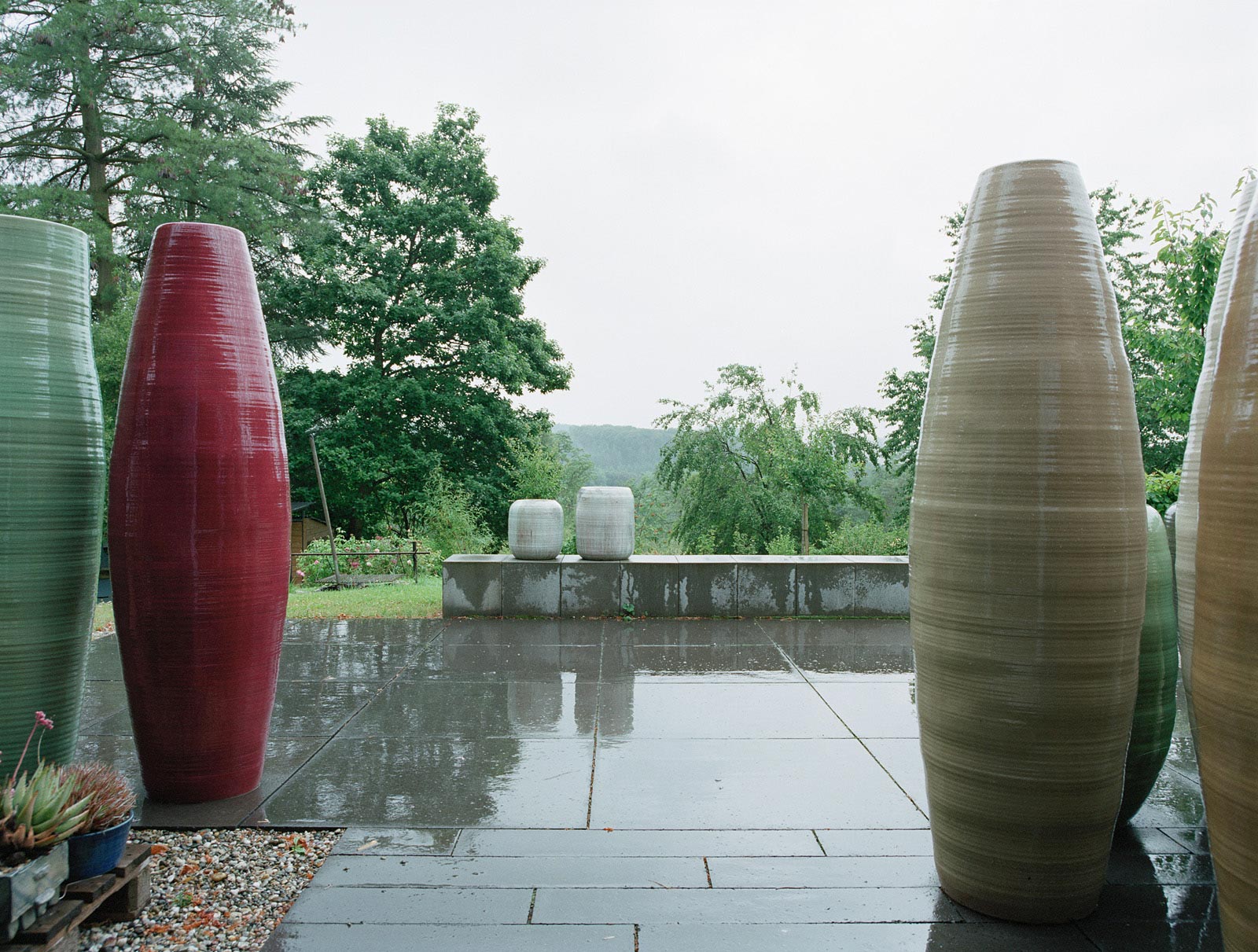 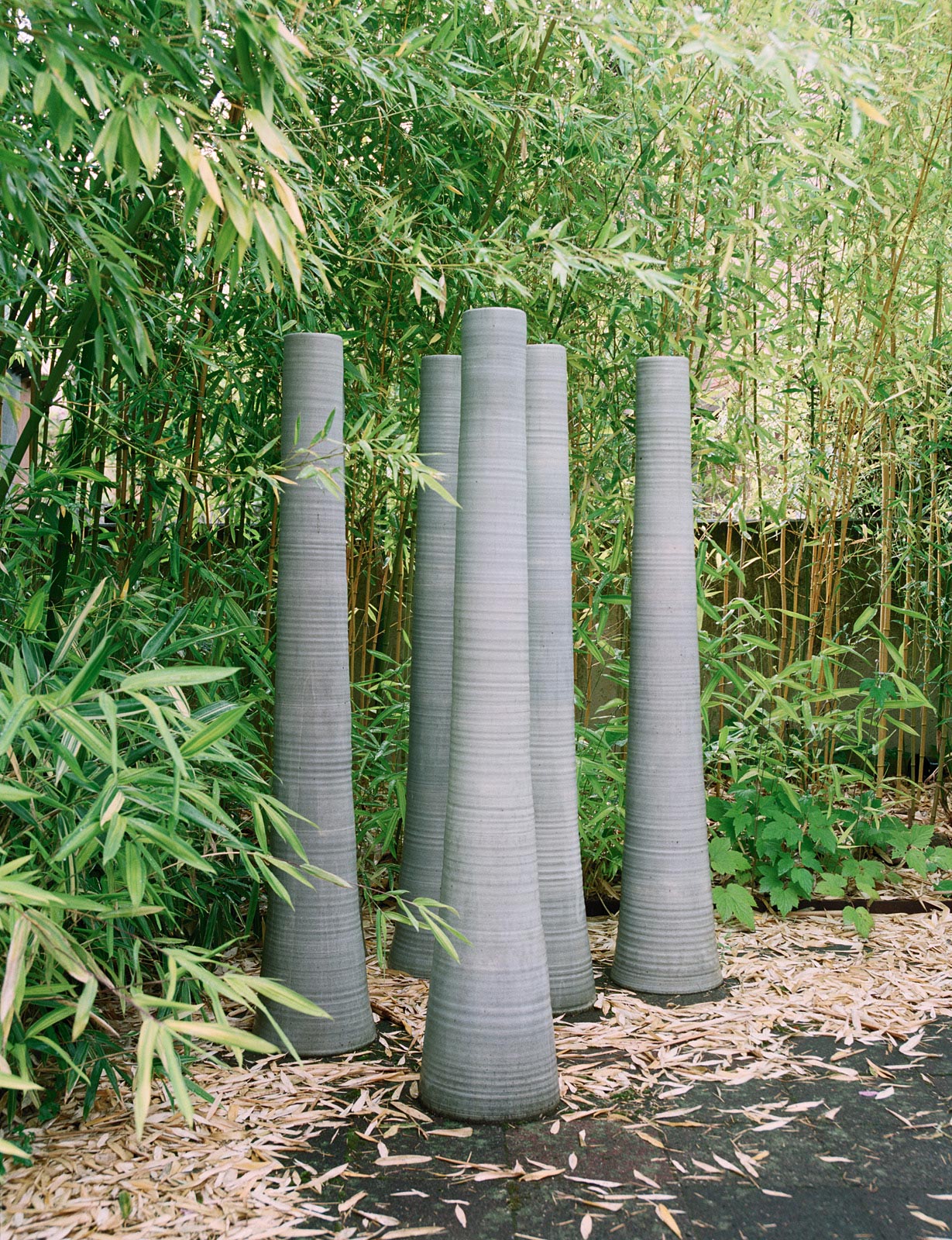 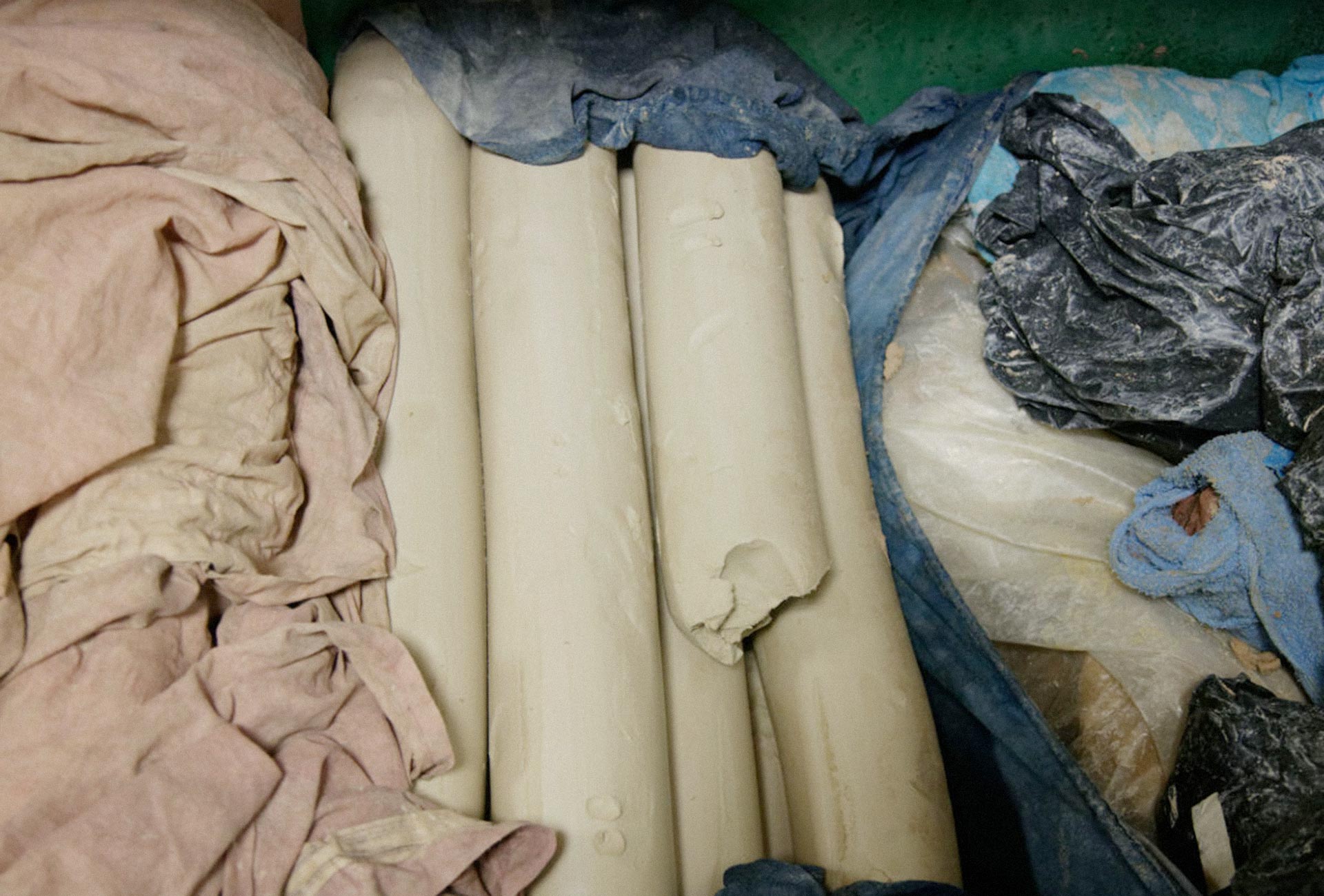 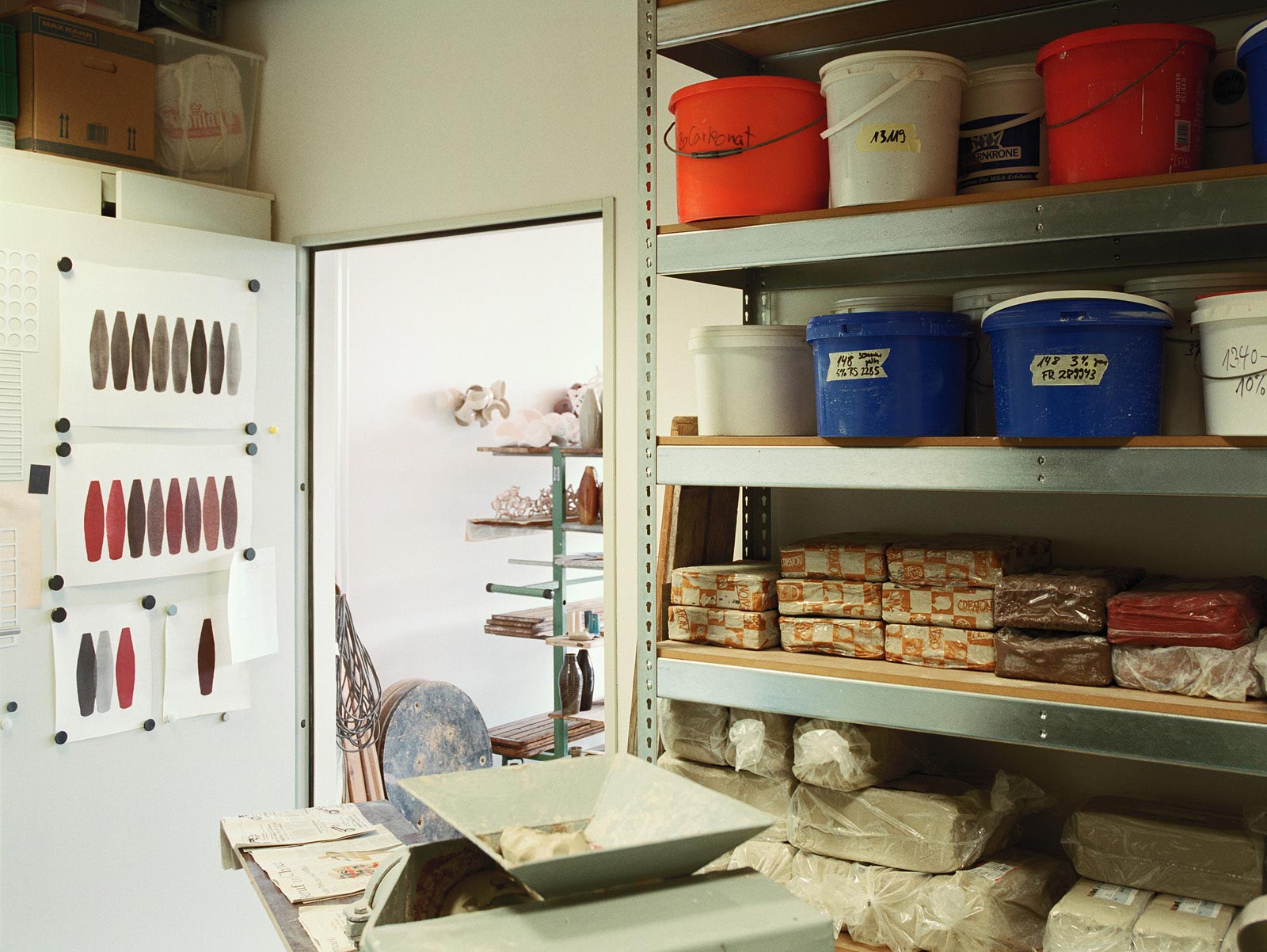 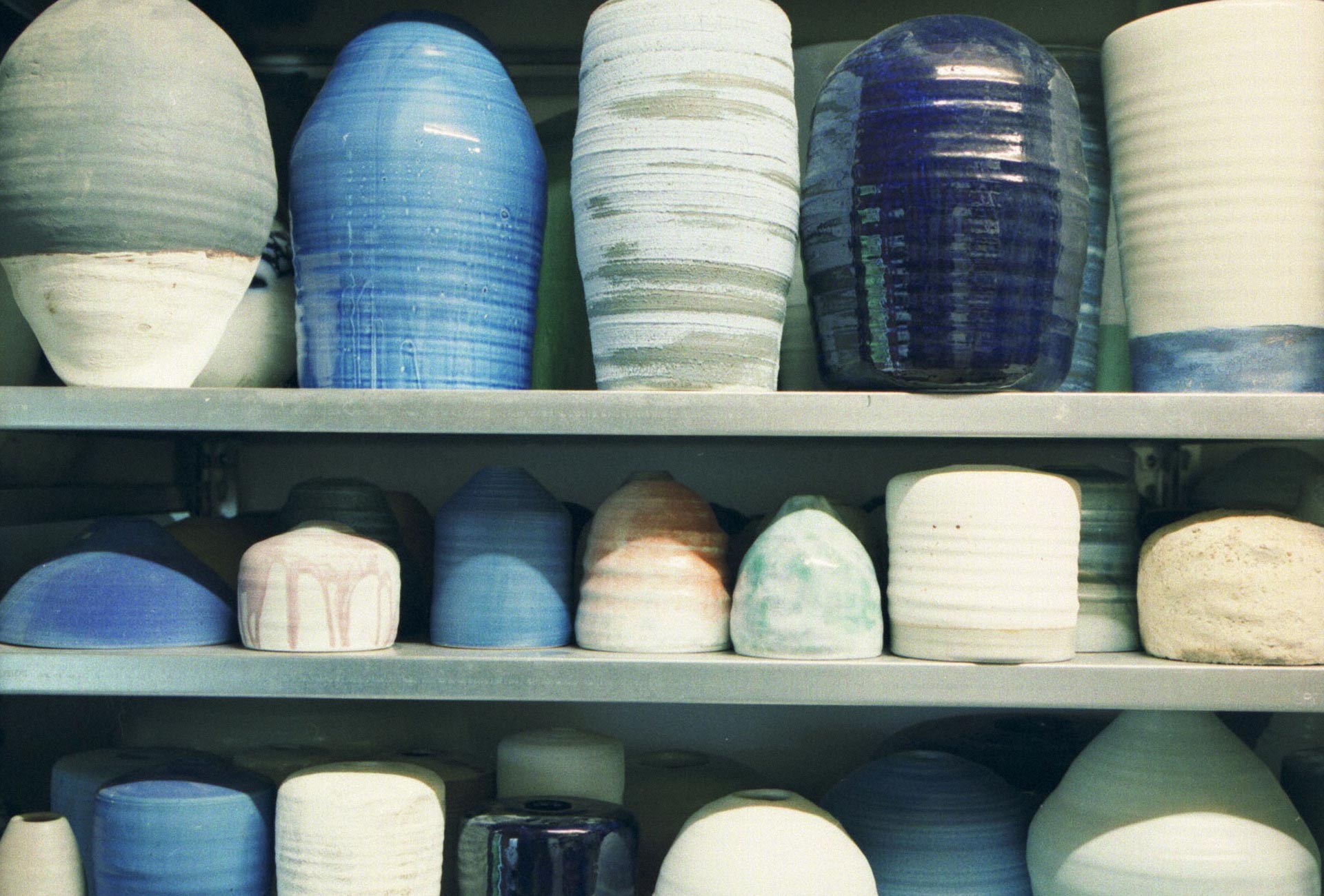 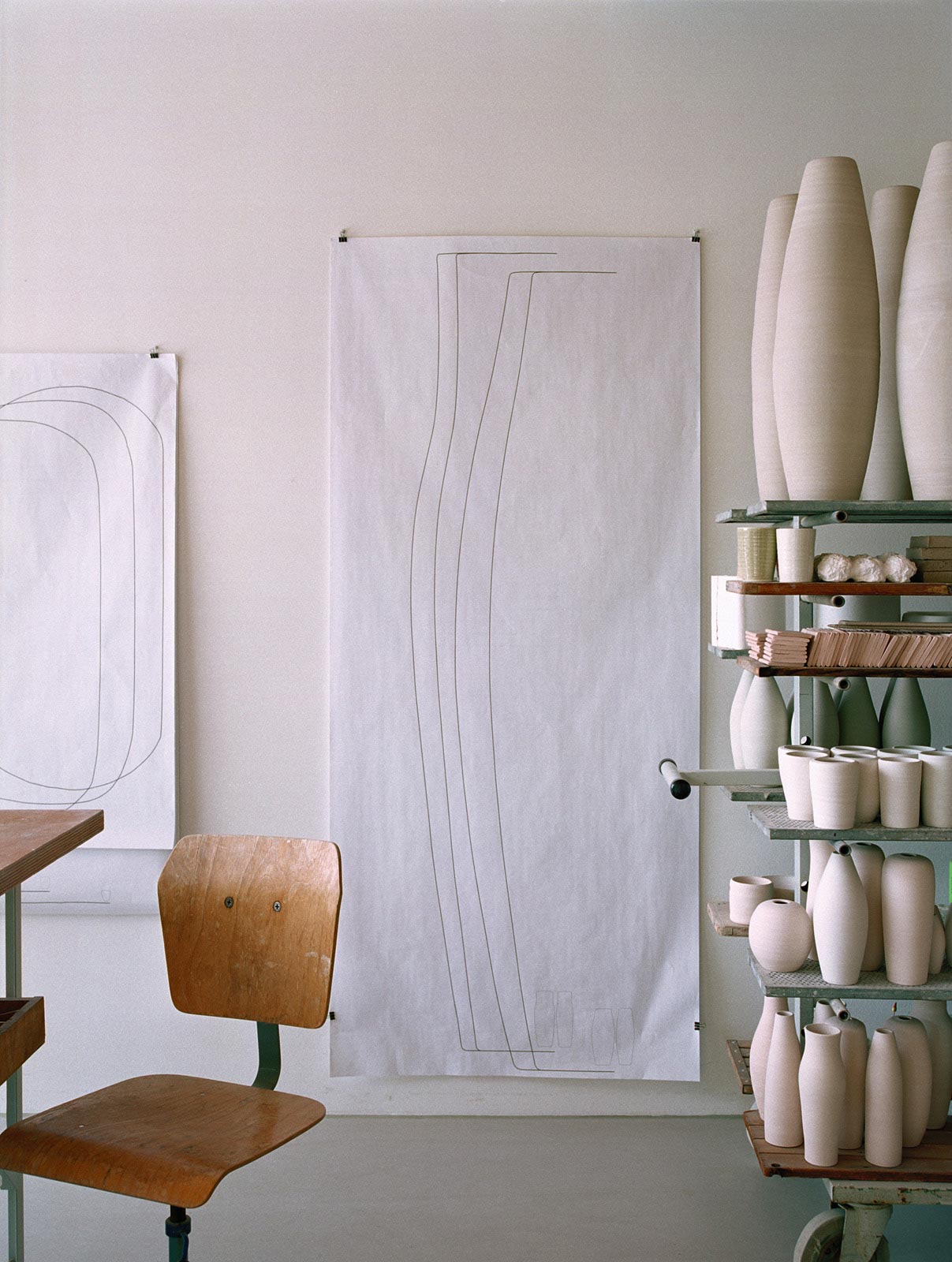 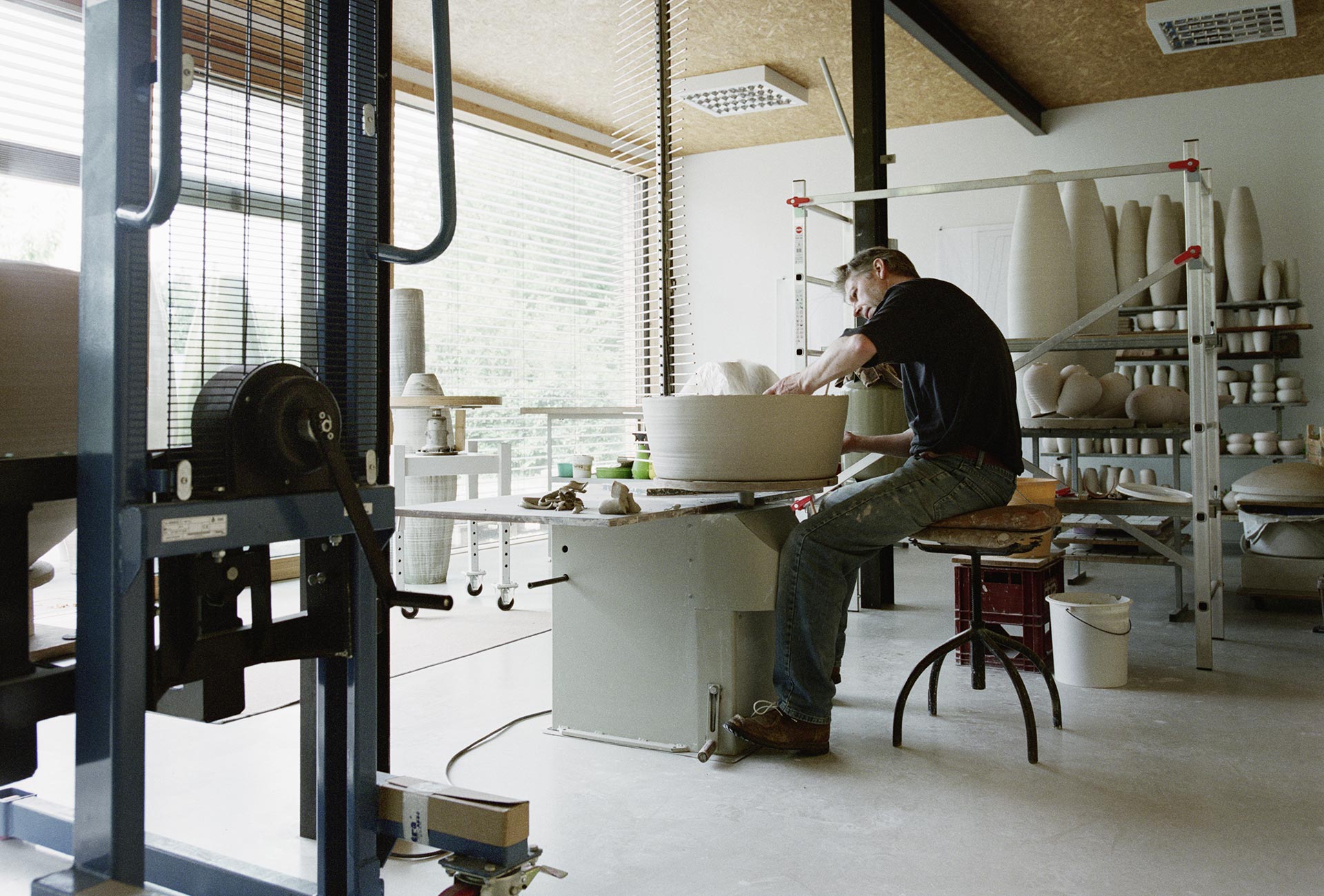 After an apprenticeship in Germany and years of training in Japan, Emil Heger studied at the Institute of Ceramic and Glass Arts in Höhr-Grenzhausen. Fascinated by the phenomenon of a shape’s creation, he asked himself whether it would be possible to present wheel-thrown ceramics in statu nascendi, i.e. to visualize the actual forming process. Although this question didn’t prompt him to “Japanize” his work, this approach was nevertheless influenced by Far-Eastern ceramics. Leaving an object’s shape and any firing marks as they are, as well as tolerating and even cherishing irregularities, is characteristic of Japanese potters – quite contrary to the perfectionism cultivated in Europe. After experimenting with what can be compared to action painting – dripping glazes on wheel-thrown rod-shaped vessels –, Heger developed tall tube-, spindle- and bulb-shaped objects that he crafted from individually thrown segments and simply christened “Thrown Shapes”.

The throwing marks on these unstraightened, unsmoothed and “evolving” stoneware objects impressively evoke the clay’s upward motion while being thrown, whereas their usually matte and monochrome engobe or glaze displays a downward flow. Thus, even in their solidified state, these objects visualize the process of forming a soft and malleable material. Though often similar, these creations are never identical. They owe their identity to variation, and vibrantly communicate that their existence as variants without a prototype is not the result of a compelling necessity but of a deliberately embraced possibility. The logical consequence was then to arrange these “possibilities among possibilities” into groups or as installations, because they only fully reveal their differences, identity and beauty when arrayed among their own kind – especially when these non-hierarchized, similar yet individually different objects have been crafted to precisely measure a given height. The effect of the interplay between indeterminate shape and strictly specified size is paradoxical: bulging, undulating and spiraling, the individual bodies wind up as tall as a man so as to perplexingly end in unison at the very same height.

Heger continued to pursue this approach, also in terms of crafting technique. His objects’ large dimensions and physical juxtaposition in groups still determine their slightly varied shapes, which, however, are no longer simply a result of the forming process, but are invented instead. Nowadays, Heger precisely preconceives the shapes of his spindle-like creations, which, after firing, measure up to 180 cm in height and up to 70 cm in diameter. He first crafts small models, which he then accurately scales up to create large-size counterparts. While his earlier creations enabled the beholder to experience their rising verticality as substantive physicality, his more recent ones rather intimidate us with their almost man-like stature. The expanding and contracting contours lend these oversized spindles a strangely amorphous quality. They look like clearly outlined, revolving phantoms, which, due to their almost horizontal throwing marks, are also reminiscent of enshrouded mummies. Yet they radiate a very classical aura, presenting themselves as lightweight pillars when looked at individually, as erect, proud menhirs, silent and inapproachable and almost as admonishing as the pillar of salt in the Bible. Whereas the formal spectrum of these more recent and more similar objects has been reduced – some of them have wider, others narrower openings, and their silhouettes vary only slightly so that they more obviously represent the same shape – they feature something altogether new and different. Enhanced with subdued yet resplendent glazes that look as if the are still wet – and which are as monochrome, finely nuanced and flowing as in previous creations – their colors and hues are entirely new and can be described as a silent choir of colors. The chromatic melody of such a group of objects is modulated by their position, proximity and distance with regard to both the audience and each other. Communicating in quieter or louder, harmonious or dissonant sounds, these identical objects tell us about their differences and demonstrate that, in the presence of others, simplicity may become plurality.