As a former student of the legendary ceramist Walter Popp, Heidi Kippenberg is a member of the Kasseler Schule für Keramik. Today she lives in Beerbach, a rural village in Middle Franconia. But a variety of other influences can be seen in this artist’s ceramics. The entire breadth of her work and a deep insight into the ceramic art of the 1970s in Germany is shown in the exhibition at Brutto Gusto. 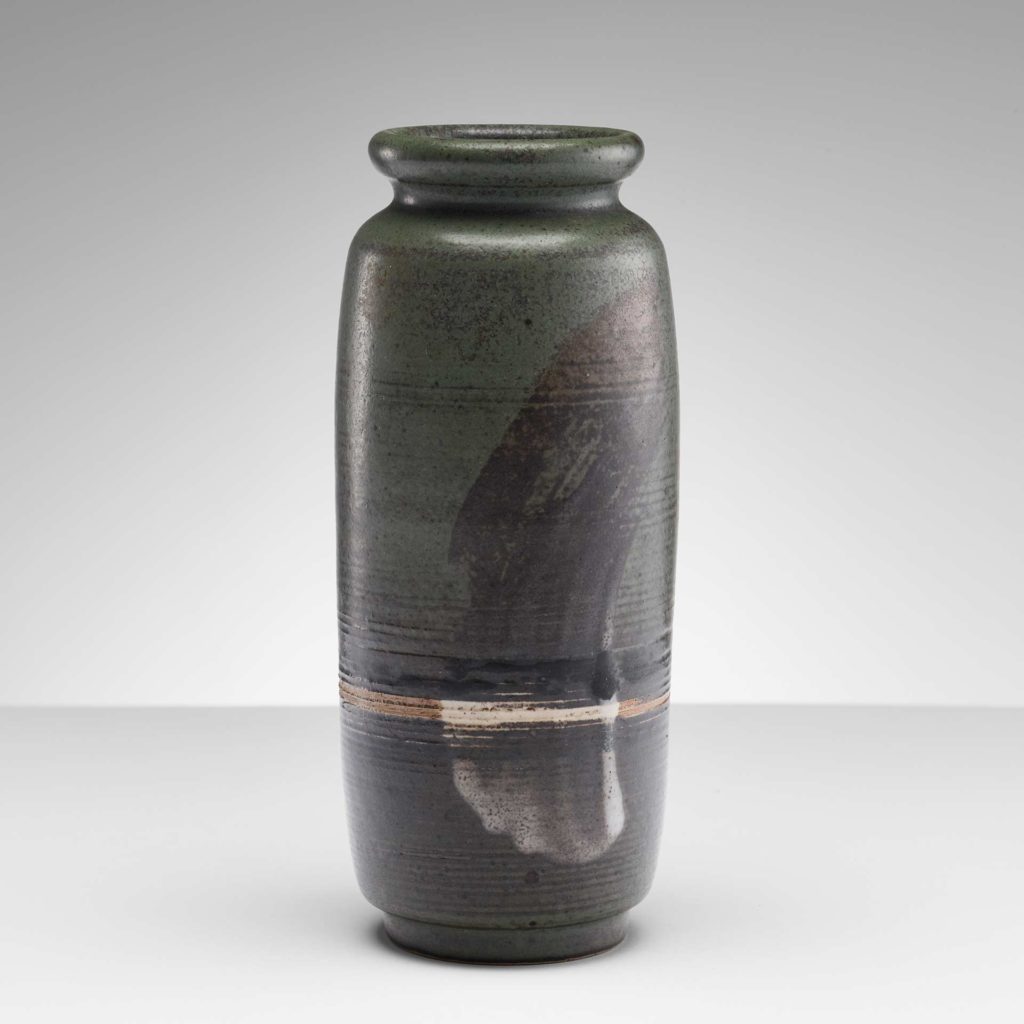 The early ceramics of the former student of Walter Popp are influenced by abstract and informal painting, as well as the ideas of the British Bernard Leach, who brought the Japanese understanding of ceramics to Europe. Shoulder vase, 1970s, matte green ash glaze, painted over in matte white, 20,5 × 8,5 cm. 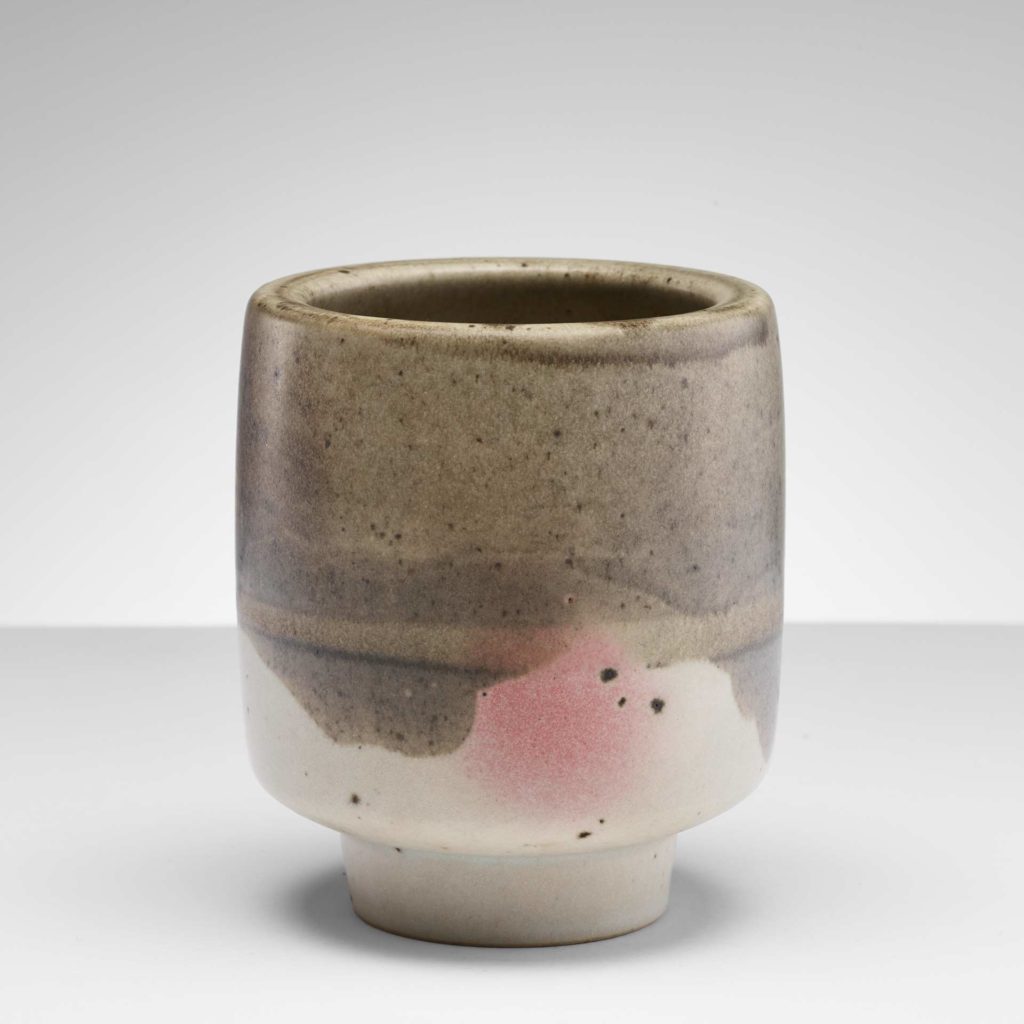 The subtly applied glaze, with the interaction of fire and ash, turns a simple drinking vessel into an object of meditation. Cylinder mug, dipped matte white from top to bottom, thinly overlaid with briquette ash, pink copper tinge, 12 × 10.5 cm. 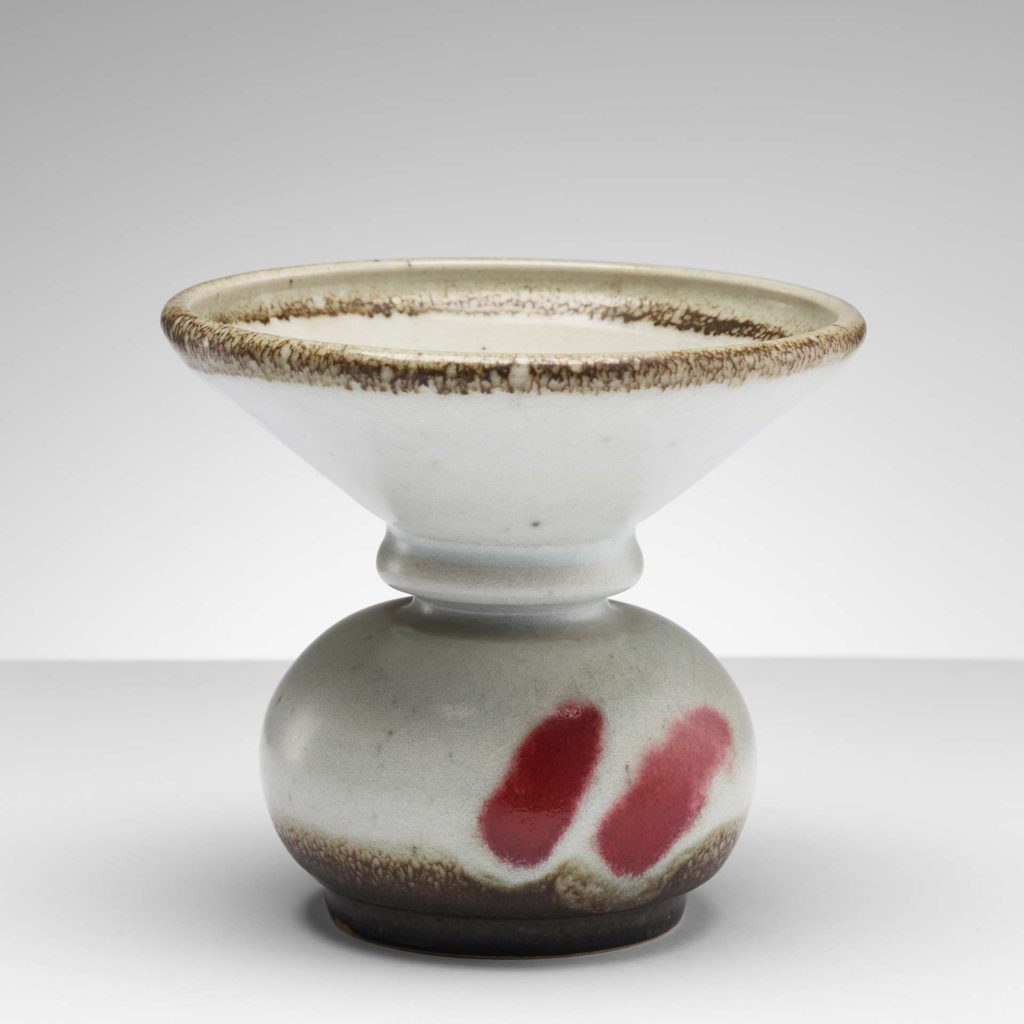 From her teacher Walter Popp in the 1960s, Heidi Kippenberg learned to handle clay more freely than traditional potters, as well as to look closely and pay attention to every detail. Collar vase, 1972, gray feldspar glaze, copper-red brushstrokes, foot with brown briquette ash.

Beerbach, a community of 200 souls near Neustadt an der Aisch. Wilhelm von Witzleben built a small castle in the center of the village around 1700. A vaulted cellar and the nobleman’s coat of arms on a residential building still recall his presence. A few steps away stands a small former farmhouse built in 1924. After Heidi Kippenberg moved into the house in 2006, she redesigned and gave a new purpose to the farmstead, where life and work were never separate. She artistically painted the walls in the low-ceilinged living area. The former stables in the outbuilding now serve as her ceramics workshop. A smaller room houses her kiln. A floor-to-ceiling window and door in the larger room open onto a lovingly tended garden. “I’m like a chicken,” she confesses during our visit. “I wouldn’t feel well without scratching in the soil.” The workshop’s main attraction is a shelf, directly behind the window, bearings ceramic works from various creative phases.

Heidi Kippenberg was born in Berlin in 1941. After graduating from high school, she learned the potter’s craft during an internship in Burgthann, Franconia. She then studied from 1963 to 1967 at the Hochschule für bildende Künste in Kassel, whereher initial apprenticeship was under the tutelage of Ernst Röttger, whose many interests also included involvement with Informal painting, and afterwards with Walter Popp, whose his assistant she would later become …

The entire article and an exciting interview with the 80-year-old artist appear in the fall issue No. 45 of Art Aurea. It is available in leading German galleries and can also be ordered as a single issue at a price of 12 euros from artaurea@pressup.de or by phone at +49 (0) 40 – 38 66 66 – 353. To subscribe, click here. A catalog has also been published by Arnoldsche.