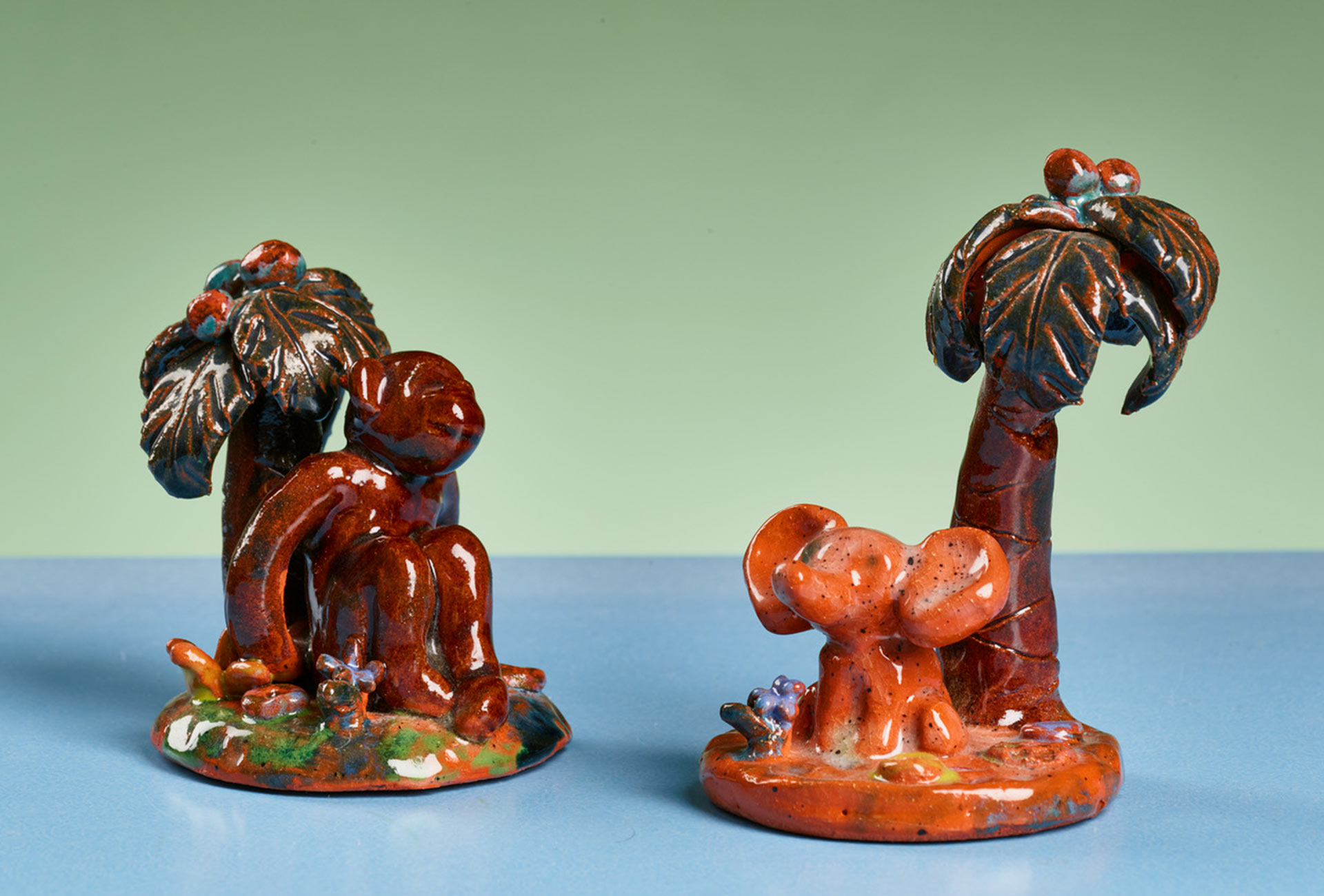 Around twenty of Walter Bosse’s humorous ceramics can be seen from September 10, 2020 at Brutto Gusto in Berlin.

Walter Bosse (1904, Vienna–1979, Iserlohn, Germany) was an artist, designer and ceramist whose oeuvre is represented in numerous private collections and museums in Austria and abroad. Well known for his brass figurines designs, it was in his early ceramic production where he undoubtedly manifested the best of his iconic creativity and originality. On spotlight is a selection of approximately twenty rare ceramic figures, most of them dated between 1924 to 1937, an era when he crafted in his original atelier in Kufstein.

Knowing about the past sometimes makes us want to wish ourselves back to bygone days. In such dreamy moments we imagine witnessing this or that historical event, strolling through legendary places and streets, meeting some particular person. I have felt like that ever since I found out that Kafka’s fiancée Felice Bauer lived just round the corner from my Berlin home. Once, sitting in Ascona in Switzerland, writing this little piece, I briefly imagined being part of the Monte Verità counter-cultural movement of the early twentieth century. And when I think about Walter Bosse, I see myself sauntering through the past, no later than 1938, let’s say, and standing outside the “Bosse shop” in the Austrian town of Kitzbühel to see all the wonderful ceramic creations on display, together, for the first time in that most cramped of spaces. I can also see myself going into the shop and leaving it again with my first ceramic figure by Walter Bosse, a chubby lad with a concertina, intended to be the start of a little collection. 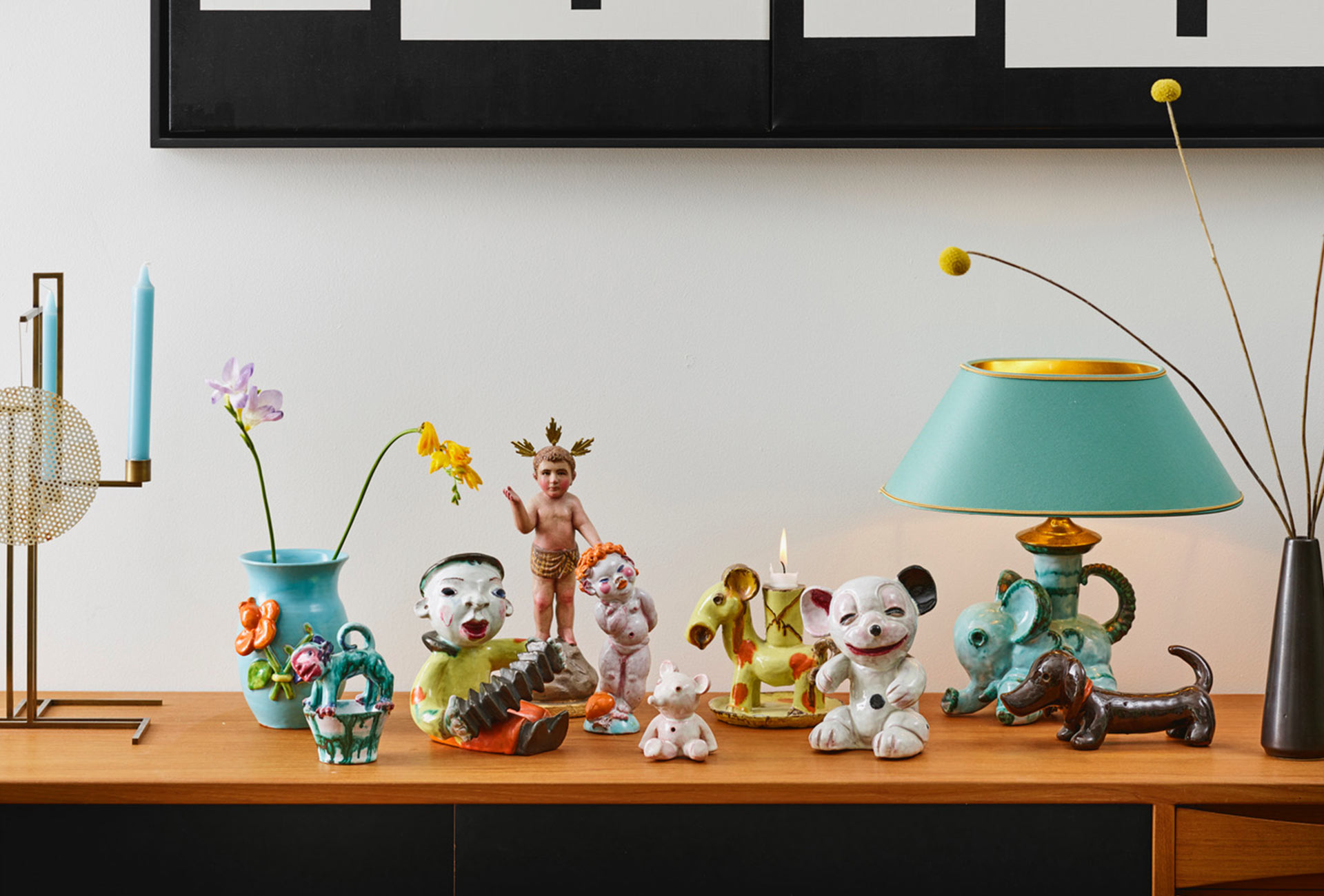 Walter Bosse’s ceramics were created in his studio in Kufstein between 1924 and 1936.

So who was Walter Bosse? He was born in Vienna in 1904. He showed signs of artistic talent at a very young age, and trained first of all at the arts and crafts school in what was then the Museum für Kunst und Industrie in Vienna. No less a personage than Josef Hoffmann, the prestigious architect and designer at the Wiener Werkstätte, promoted Bosse’s great talents from the outset. But Bosse was not just attracted by architecture: from 1922 onwards he devoted himself to his numerous and increasingly unusual ceramic designs in his own little workshop in Kufstein. This period saw the rise of a magnificently colorful series of boys and girls, putti and monks, trees and flowers and, above all, a constantly growing menagerie of animal pieces, some of them absurd and grotesque: cats, dogs, birds, rabbits, deer, little horses, frogs, elephants and monkeys, as well as some other mongrel creatures. Finally, his red and yellow dragon dog attracted international attention for the first time at the Paris arts and crafts exhibition at the Grand Palais in 1925. The following note appeared in the accompanying catalogue: “Young Walter Bosse from Kufstein is a striking presence among the Austrian artists as a great talent in ceramics. He knows how to use his grotesque animals to translate his constantly growing series of witty and comical ideas into a characteristic, lucid formal language which for all its primitive quality shows humorous life and vigor.”

Religious motifs such as this Madonna and Child can also be found in the spectrum of Walter Bosse’s ceramic world.

More and more figures, that quite clearly could only be by Bosse, were created in subsequent years: no ceramic artist before him, nor I think after him, has succeeded in shaping such wonderful and enchanting creatures in clay. He breathed an expression of soul and emotion into his many figures in a way that has never been surpassed, of the kind reserved only for the naïveté of children, or indeed great artists. Mouths and lips, hands and fingers, heads and ears overwhelmed by curls, the fluffy paws and turned tails of his animals, the appliqué plant outgrowths and flower stalks, his creations’ facial expressions: all these things became an unsurpassed representation of childlike playfulness in Bosse’s work. To crown his oeuvre, as it were, Bosse provided his figures with glazes that are also incomparable in the expressive certainty of their style: here a powerful Mediterranean blue, there the glowing yellow of lemons, then a blazing red, a delicate pink, perhaps a touch of more lilac, of turquoise, tar black, even a robust shade of orange. None of this is applied in an unduly ostentatious way: the glowing colors are accentuated and composed with what seems to be a light touch. Some, in turn, seem like a symphony of the most vivid hues colliding with each other. Here Bosse shows that he is a virtuoso painter as well as a master potter.

Bosse’s fabulous creatures acquired many friends and admirers in Kitzbühel in the 1930s. American and British tourists, in particular, were keen on these ceramic figures and exported them to the wider world as artistic souvenirs. Then historic periods of crisis and upheaval loomed up, and finally came the barbaric Nazi dictatorship, and all this put a stop to Bosse’s art ceramics production in Kufstein. His figures were never to exhibit the same highly personal features after that. The smile that was an integral part of them seemed to be gone forever, as though they had lost their childlike innocence. All his creations were to go through countless variations until his death in 1979, above all in metal as well. But gone were the days of the early ceramic pieces, so magically and touchingly beautiful and sensitive that people just simply had to love them. 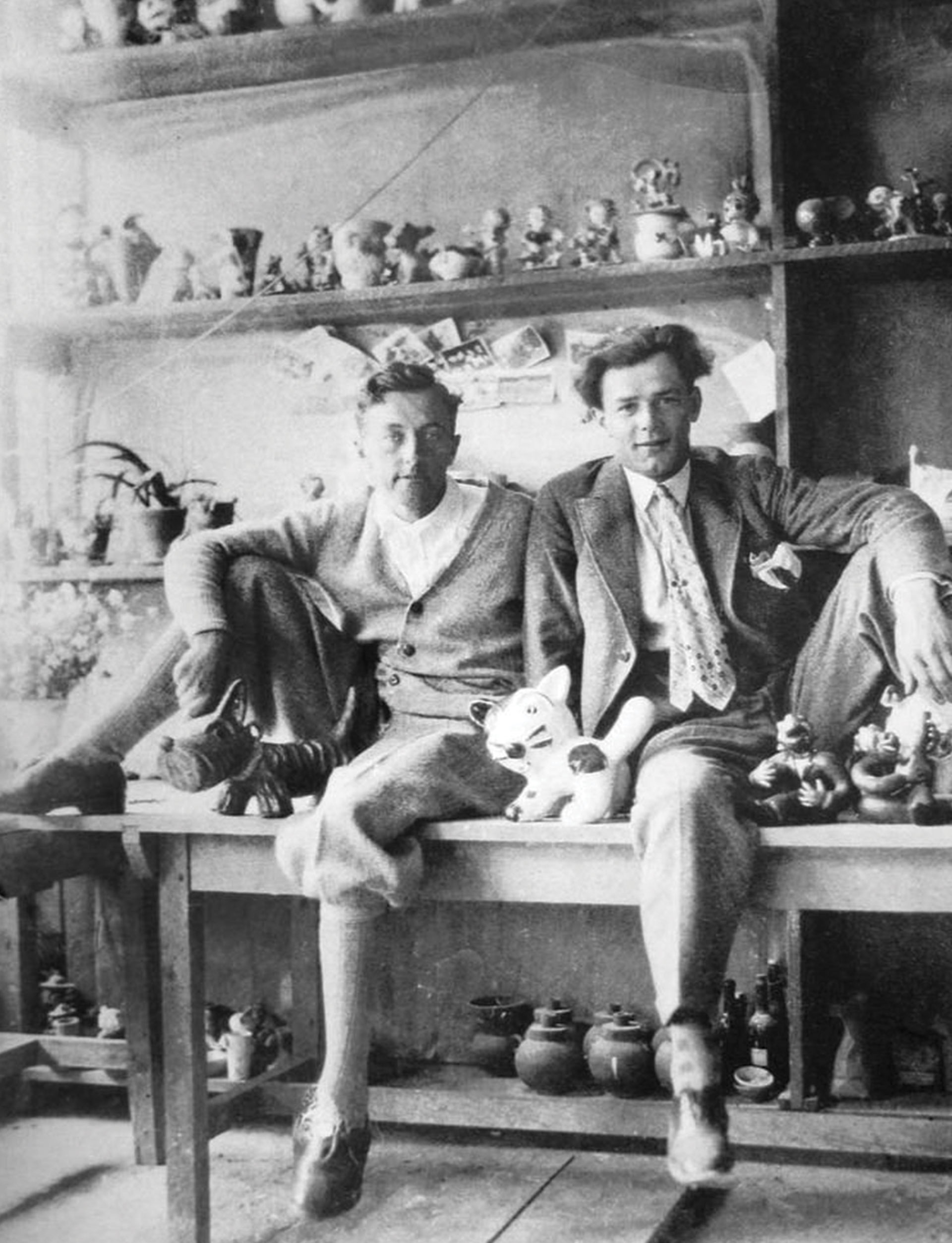 Walter Bosse, right, with a friend in his studio.

These days people will generally be dismissed as eccentric if they admit to being Walter Bosse fans, or even more, great lovers of his work to the point of, from time to time, even buying one of his creations because each new figure charms a wonderful smile out of them day after day, and can cheer them up for a moment. Here derogatory talk of kitsch comes all too easily, of arts and crafts or folk art, as if precisely these categories could not lead to aesthetic phenomena of the utmost beauty. But the idea of beauty, like the idea of love, is a treacherous thing, as neither notion can be completely objectivized. It is sometimes said that beauty cannot be talked about, but has to be experienced and felt. Seen in this way, it is also the subjective aspect of Bosse’s early figures that identifies him as a magnificent artist who – it could be put like this – brought the beauty of heaven to earth. We should not let ourselves be deceived by the imitations and re-creations that are all too common; they are to be found in many, many places, and are merely masquerading as coming from the master’s hand.