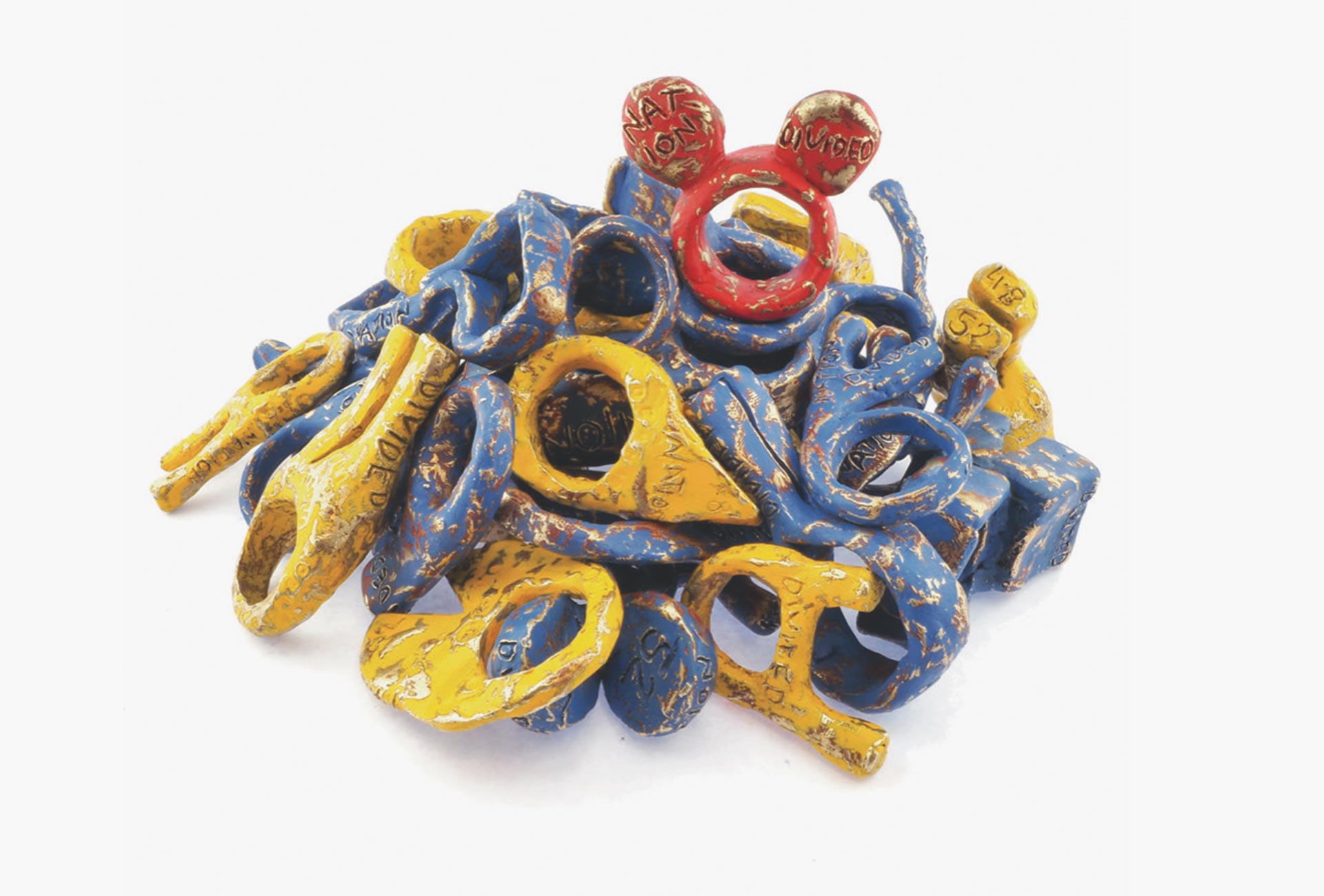 These rings from Jordan Furze, entitled Nation Divded, should be on display at the Talente special show as part of the “Handwerk & Design” in Munich.

The German Confederation of Skilled Crafts (Zentralverband des Deutschen Handwerks, ZDH), Bayerischer Handwerkstag, and the Chamber of Crafts for Munich and Upper Bavaria (Handwerkskammer für München und Oberbayern), shareholder of GHM, trade show organiser, support the decision made by the Bavarian government’s crisis team and are hereby prioritising the well-being of exhibitors and visitors.

Dieter Dohr, Chairman of Board of Directors of the Gesellschaft für Handwerksmessen mbH, gave the following comment on the situation: “Due to the spread of the Coronavirus, the decision to cancel the Internationale Handwerksmesse, a major event with more than 1,000 exhibitors, over 100,000 expected visitors, and an accordingly high number of personal interactions, was unavoidable. We hope all trade fair participants understand this decision. The goal of the trade fair lies in enabling a wide range of in-person conversations to maintain and build business relationships. Under the current circumstances, we cannot achieve this goal without putting participants at risk.” Exceptions to this cancellation due to force majeure include the supporting events on craft trade policy as well as the plenary assembly of the German Confederation of Skilled Crafts. The next Internationale Handwerksmesse along with Handwerk & Design and Garten München will take place from 10 to 14 March 2021.

The virus and what we could learn from it

A new flu virus shows how vulnerable our globalized economy truly is. For now, we can only recommend following the advice of virologists and experts, i.e.: Don’t panic. Whoever buys protective masks in Germany, which are needed in hospitals, is acting counterproductively and endangering doctors and patients unnecessarily. Hoarding food and toilet paper is wholly inappropriate too. You can reduce the risk of infection if you follow a few basic rules. The most important one is to wash your hands thoroughly and to sneeze into the crook of your arm. This should also be standard procedure for everyone who catches a cold or the flu. It is also advisable to keep some distance between yourself and others.

We need to draw the right conclusions from the crisis. The rapid worldwide spread of the coronavirus is a direct consequence of uncontrolled globalization. Production takes place all over the world nowadays, wherever the goods can be produced most cheaply. Too often, no consideration is given to environmental standards, humane working conditions and fair wages. Long transport routes contribute to the climate catastrophe and environmental destruction, which jeopardize the future of our children and grandchildren. One consequence of the coronavirus crisis is a scarcity of medicines in Europe – because many medicines are produced in the Third World, where low wages are paid, environmental regulations are often absent or unenforced, and child labor is ignored or approvingly allowed.

The fact that the coronavirus first struck Europe in northern Italy is probably due to the textile industry. A large proportion of Italian brands and luxury labels arrange to have their products manufactured in Asia. But the problem doesn’t only affect Italy. According to Greenpeace, sales of clothing almost doubled between 2002 and 2015: from 1 trillion US dollars to 1.8 trillion US dollars. A further increase to 2.1 trillion US dollars is expected by 2025. German consumers already buy an average of 60 articles of clothing per year, but wear those clothes only half as long as they did 15 years ago. Another reason for the rapid global spread of the coronavirus is the uninhibited desire to travel, often to the world’s most remote destinations.

How will humanity respond to the current crisis? At the moment, many people are literally holding their breath. Some are rethinking their opinions, especially now that the coronavirus is not the only threat. But this potential reorientation could be quickly forgotten – until the next catastrophe strikes. Or couldn’t we finally begin to think a bit more deeply, as befits Homo sapiens? After all, sapiens means “wise.”