Knives in every imaginable shape and size are displayed atop the long table in the exhibition room and on the shelves that line its walls. The assortment includes the legendary Buckels breakfast knife, the multipurpose Yatagan with its curved form recalling a Saracen saber, the Parmoulin for parmesan and other hard cheeses, the classical little vegetable knife, the Mittelspitz fruit knife, the Vogelschnabel [Bird’s Beak] and many other elegant edged tools for cooking and dining. Behind these mellifluous names stand traditions and stories: French, Oriental, Japanese, and naturally also the ones about Windmühle (Windmill) and Eichenlaub (Oak Leaf) knives in Solingen-Ohligs. 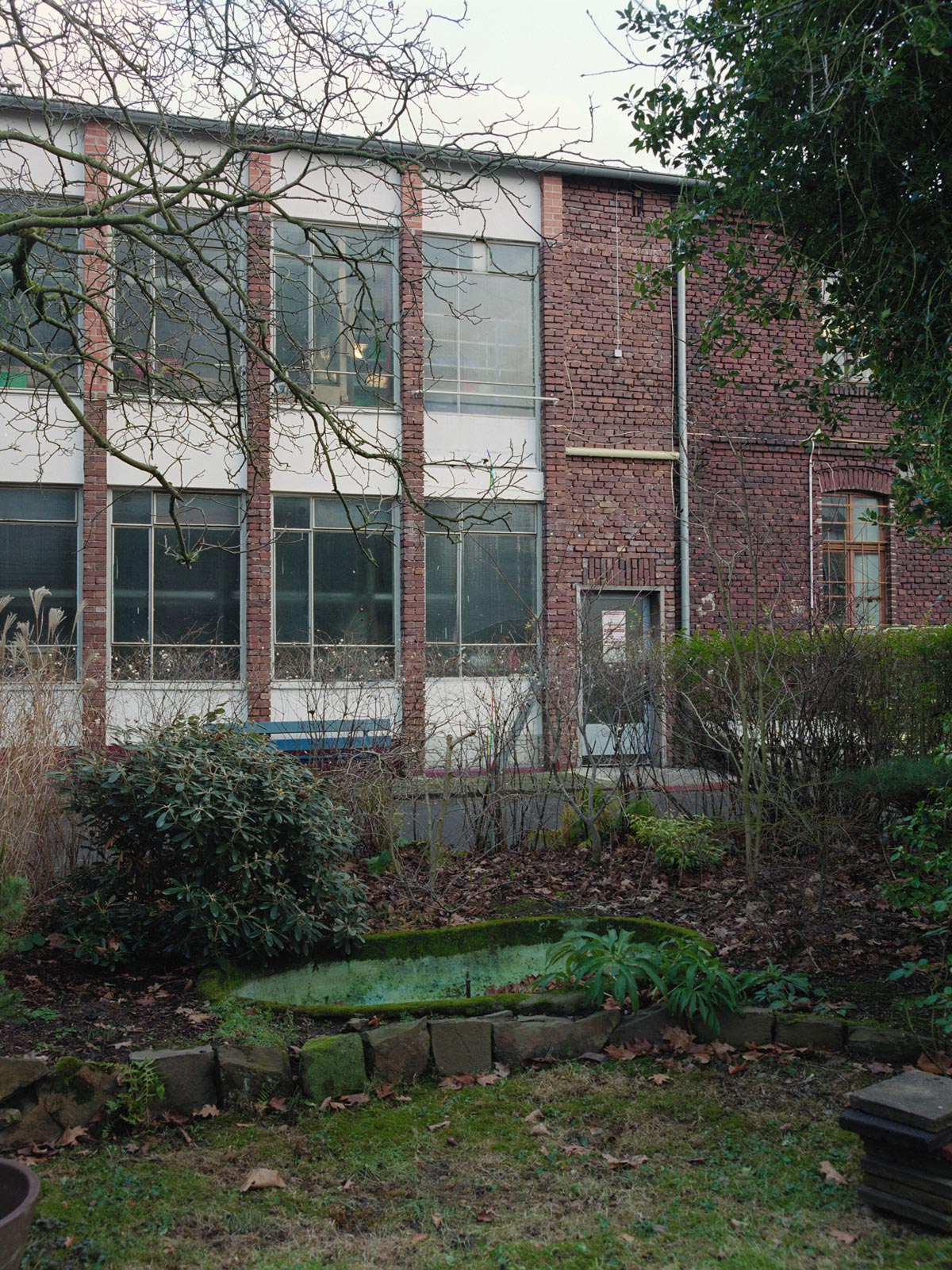 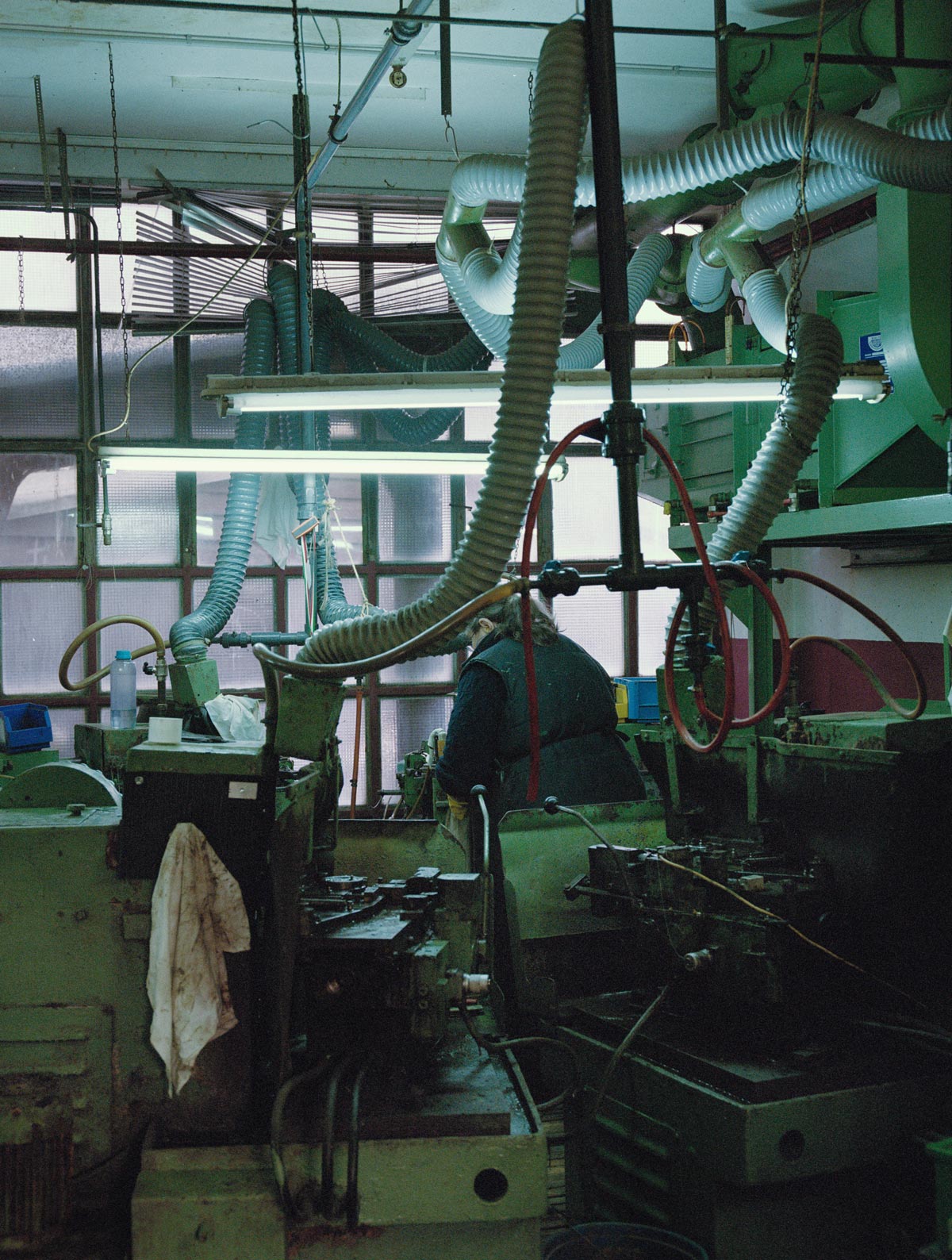 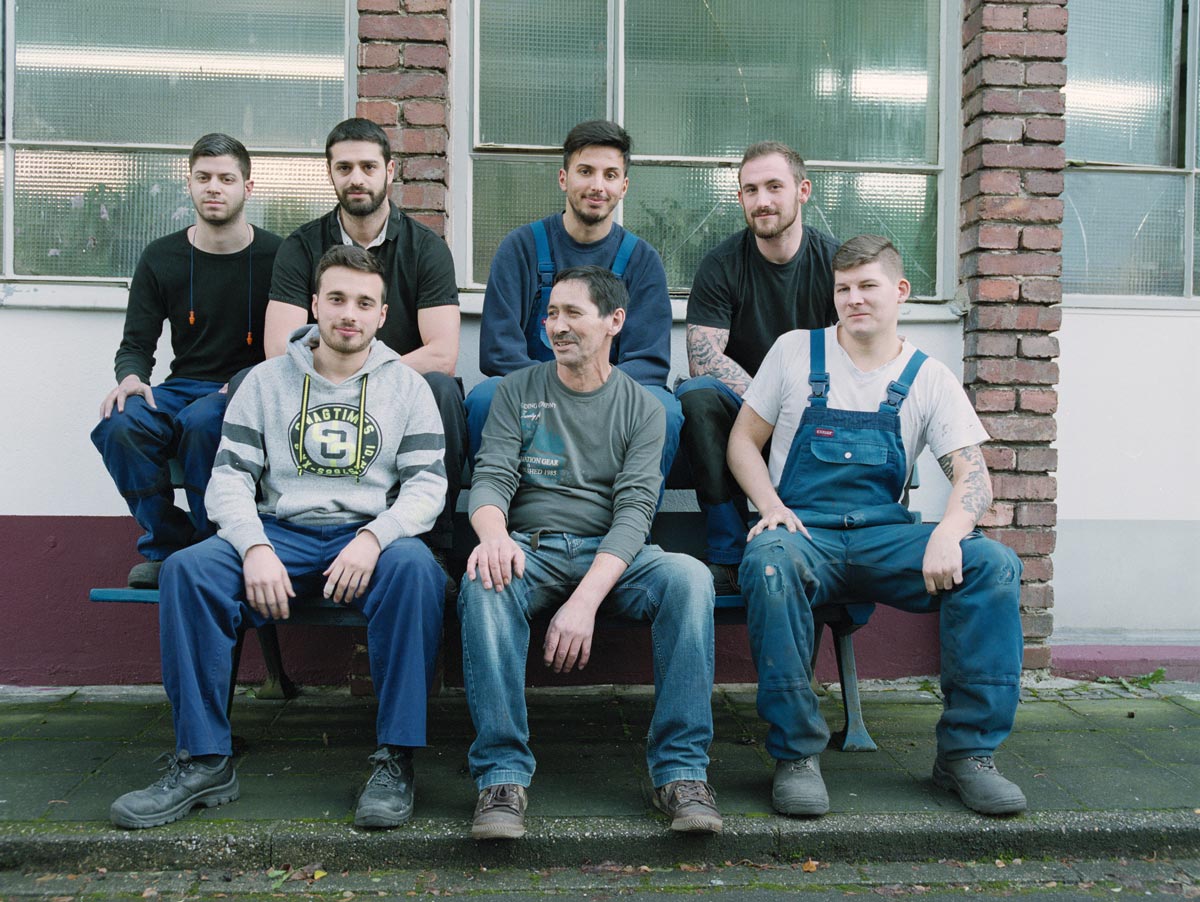 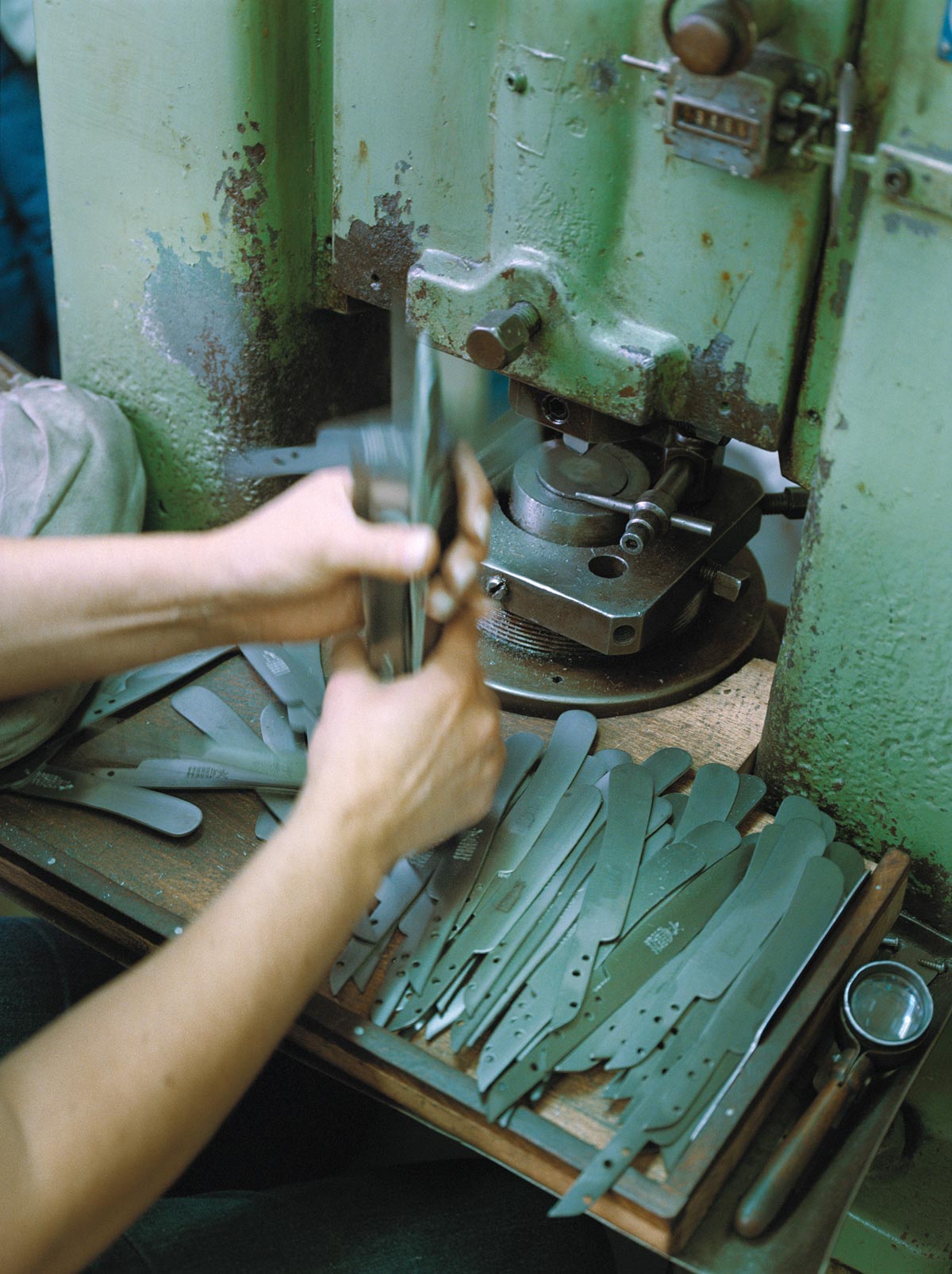 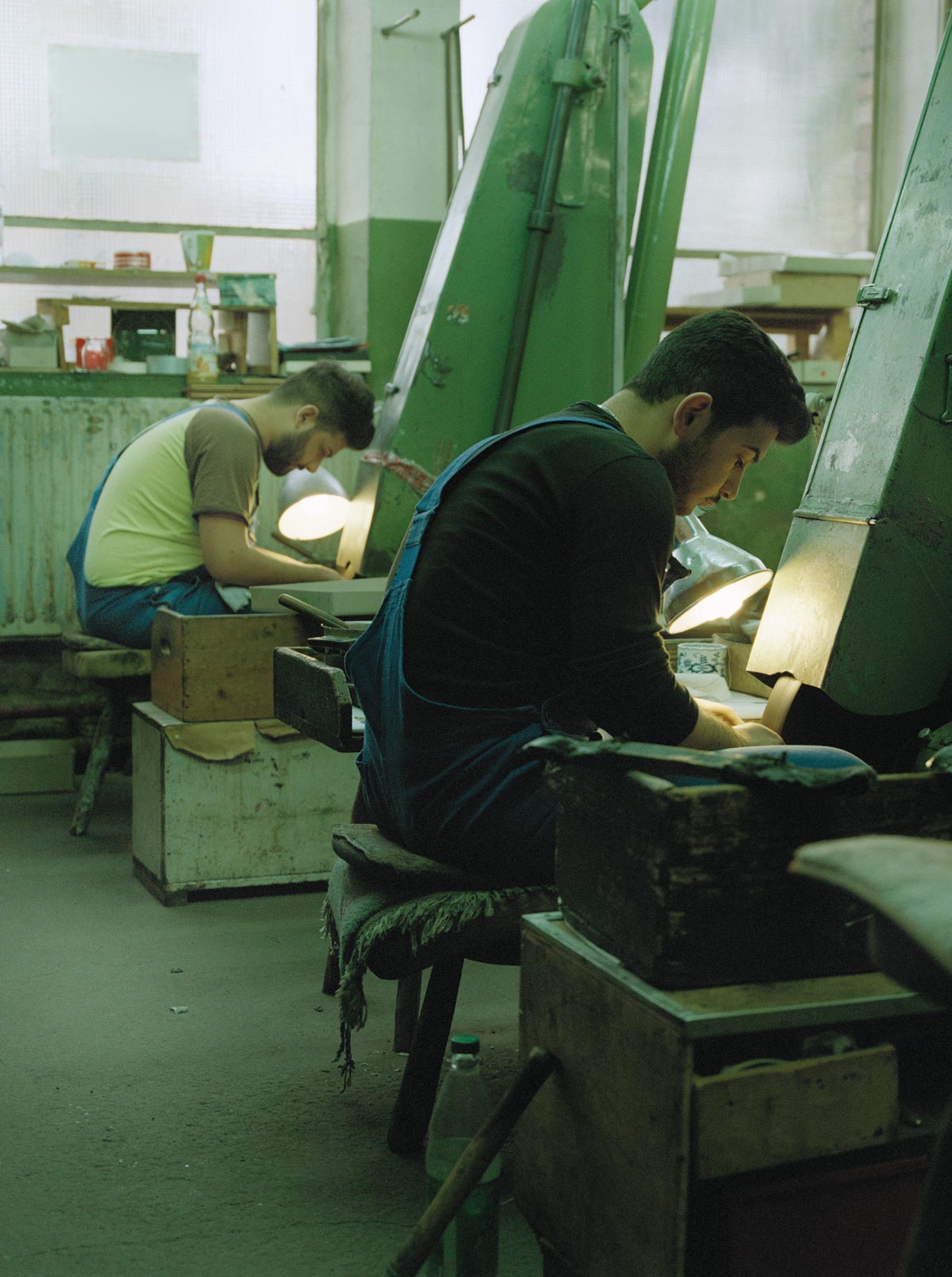 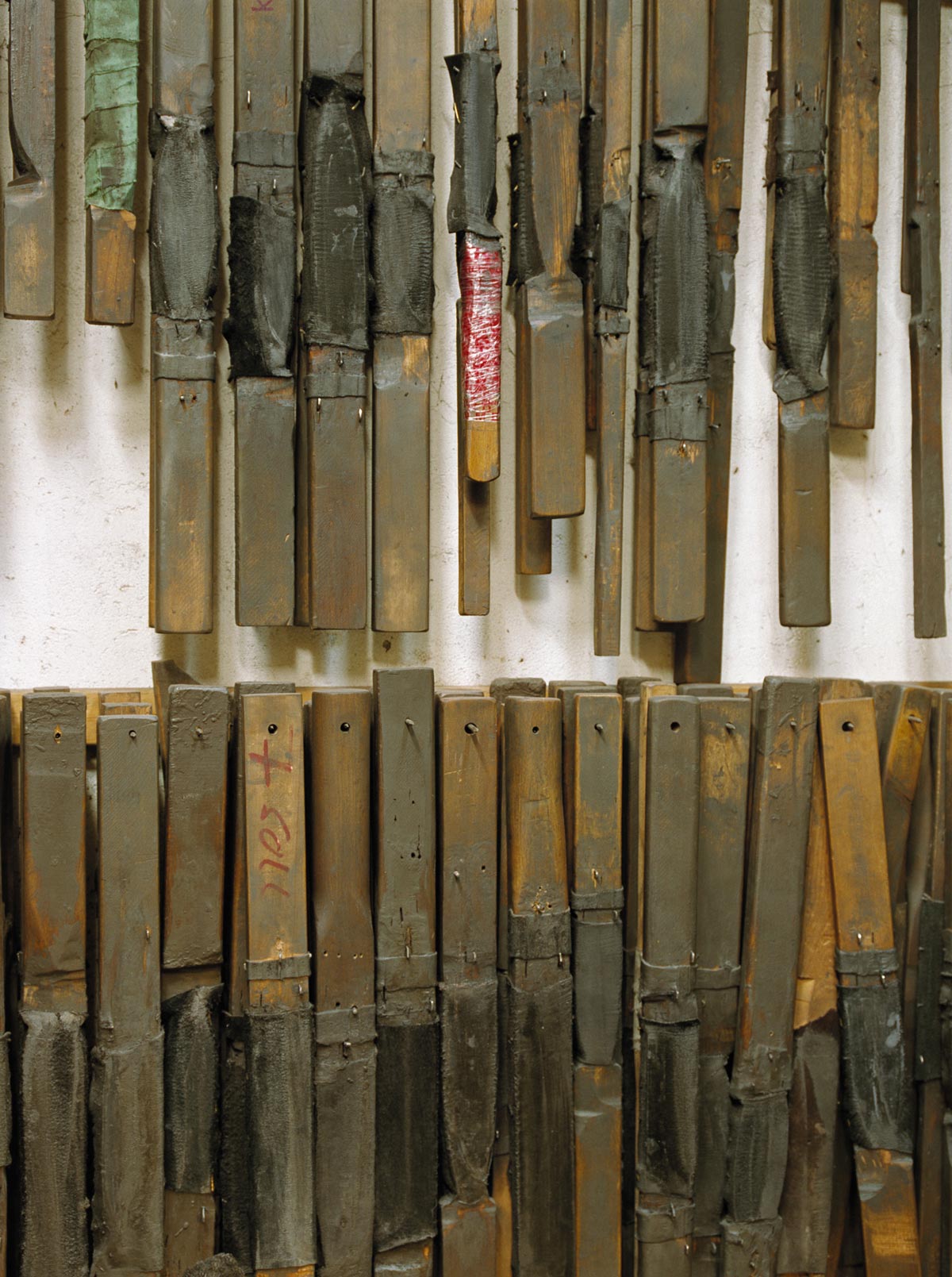 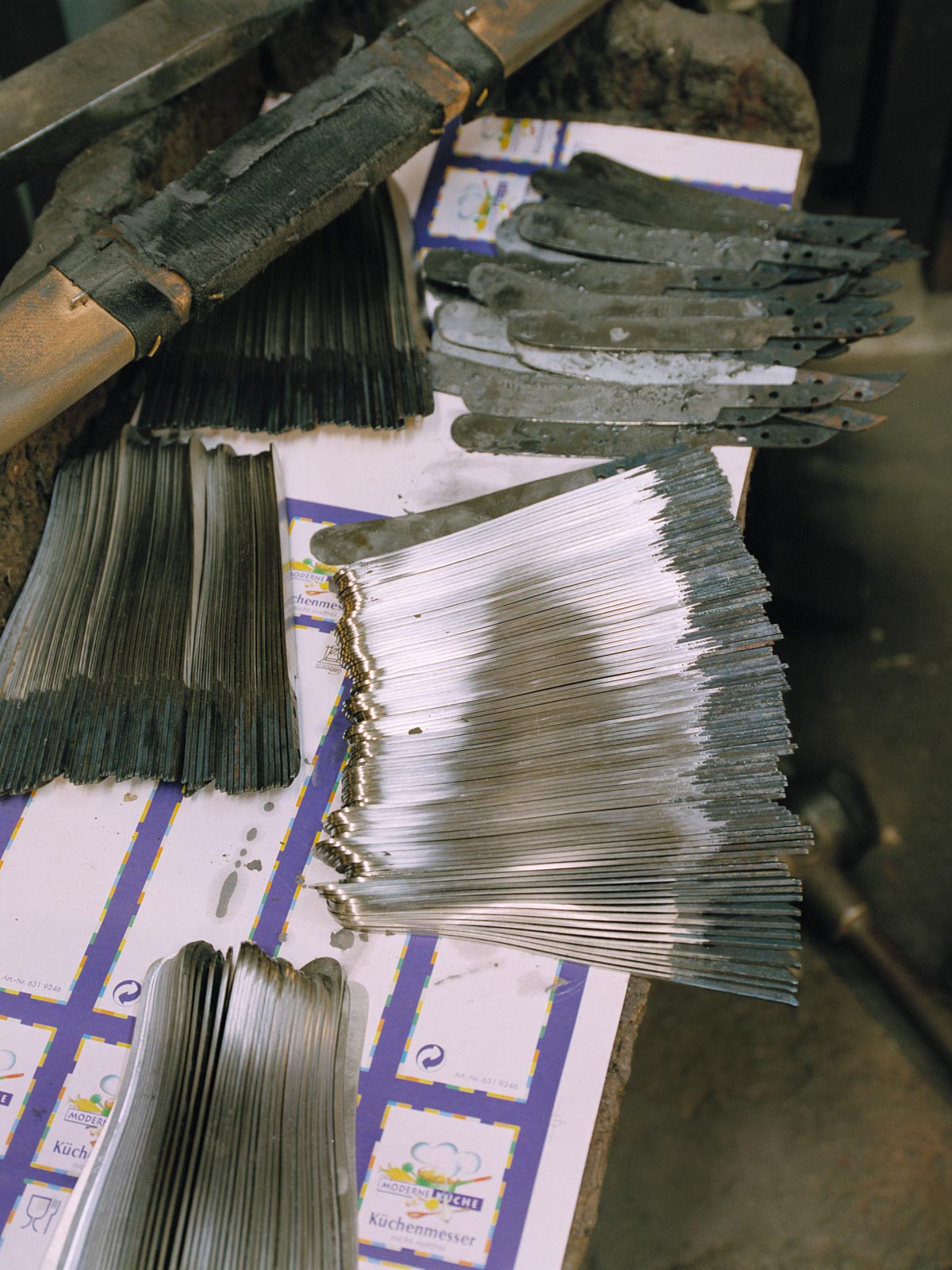 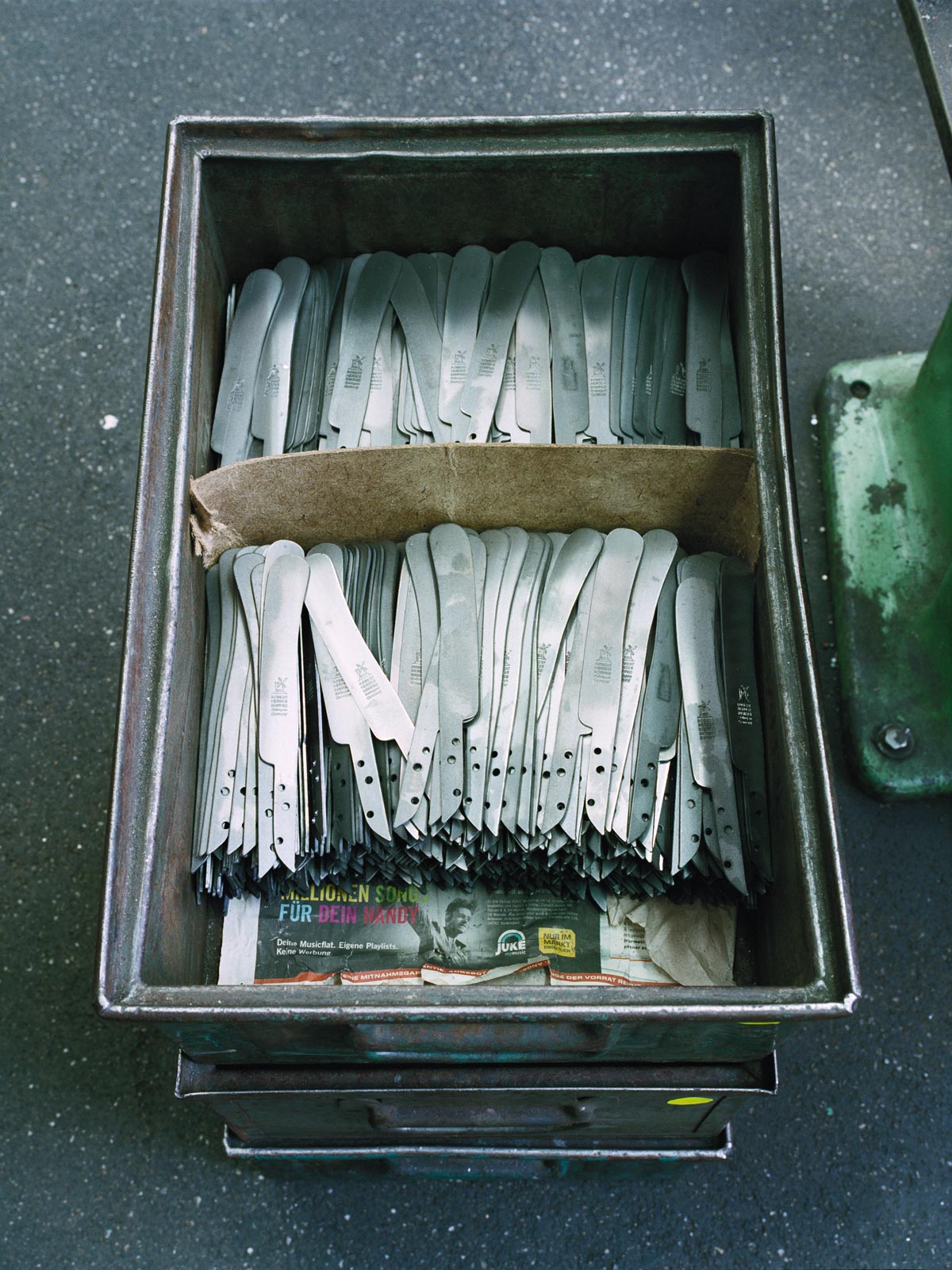 Giselheid Herder-Scholz knows them all. Reigning over the autonomous knife realm of the Robert Herder GmbH & Co. KG, she’s thoroughly familiar with the history and technical details of knife culture. In her pleasantly clear voice, she explains the differences between a fully hand-wrought damascene knife and knives made from prefabricated blanks, known as sekisouko in Japan. She recounts how she and her Japanese adviser Tomoyuki Takada went to Sanj in Niigata Prefecture to visit the bladesmith Tsukasa Hinoura and initiate collaboration with this prize-winning Japanese master. Expertly and respectfully discussing the precious artifacts in the showroom, she reaches almost reverently for a textile case containing the four-part Eichenlaub cutlery set, which was created in collaboration with Japanese maki-e master Hideo Takahashi. Maki-e is the traditional art of sprinkling gold dust to create decorations that embellish urushi, i.e. Japanese lacquer objects. Wooden handles adorned in this manner transform the cutlery into a one-of-a-kind and not-for- sale set that enjoys a place of honor in the manufactory’s collection. A similar honor is lavished on the Ur-Zöppken. One of these little kitchen knives, which Windmühlen produced by the millions, was returned to its manufacturer because it needed a new wooden handle after six decades of daily use. “It wasn’t easy to persuade the owner to allow us to include this knife in our exhibition,” Giselheid Herder-Scholz recalls, “but he finally agreed when we offered to exchange his old knife for a new one.” Only a narrow curved strip on this particular Ur-Zöppken remains of the carbon-steel blade that typifies Windmühlen’s knives. After having kept its sharpness through three generations of use, this knife now rests in a glass case, where it shows what a genuine carbon-steel knife in Solinger Dünnschliff (thin grind) can do. 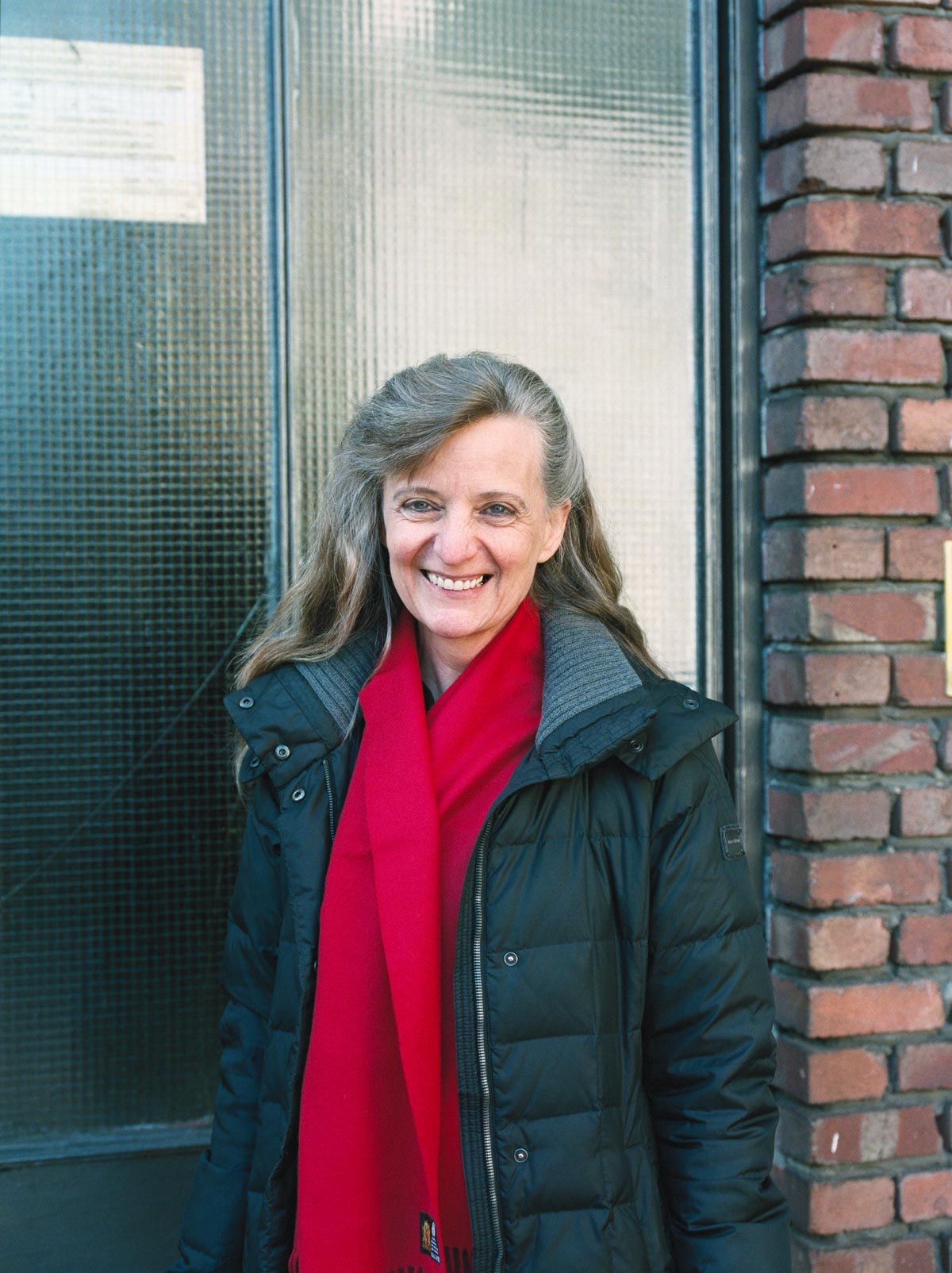 Nearly all the secrets of this outstanding quality result from the know-how of the circa 70 employees at the Windmühlen manufactory, which occupies several historical factory buildings constructed with brick walls in the 19th-century style of the Gründerzeit, when Germany underwent rapid industrial expansion. Herder-Scholz talks about her craftspeople with the utmost respect. Thanks to them and her partner Frank Daniel Herder, traditional métiers such as grinder, glazer, Reider (who joins the blade to the handle) and Ausmacher (who puts the finishing touches on the handle) didn’t die out years ago. The master grinder Fehrekampf, who passed away in 2011, remains unforgotten: long after he had reached retirement age, he continued to come to the manufactory to teach younger bladesmiths the craft of blue glazing, i.e. the highest level of honing. Thanks to Fehrekampf and his colleagues, Windmühlen Knives can continue to cultivate the fine art of making blue-glazed knives.

Carbon-steel knives are still made in almost exactly the same way as they were in the days of great-grandfather Robert Herder, who founded this manufactory in 1872. Most blades nowadays are made of stainless steel, which contains circa 14% chrome. Carbon steel, which contains about 0.8% carbon, is not rust-free, but is significantly harder and can be wrought better than stainless steel. The incomparably long-lasting sharpness results in part from the thinner blade, which is ground at an acute angle to taper narrowly and pointedly toward its razor-sharp edge. The Windmühlen manufactory also makes knives that are primarily used at the dining table. The company’s refusal to abandon the Solinger thin grind was one reason why Windmühlen Knives survived, unlike many other erstwhile knife companies in Solingen. But the manufactory’s survival isn’t
solely due to this tradition, which Herder-Scholz’s father cultivated until his death in 1992. “In the late 1990s, we thought about which market could be promising for our artisanal manufacturing method. Japan was the logical choice,” recalls Herder-Scholz, who traveled to the Far East many times, learned some Japanese and established contacts with distributing partners, Japanese bladesmiths and artists. Nowadays, Japan is a driving force as a market that enabled Windmühlen Knives to revive many classics. One such model is Buckels: thanks to its thin grind, the Buckels knife perfectly slices a hard roll without crumbs or clumps so the bread’s neatly cut surface can be buttered with incomparable smoothness. Another step was the takeover of the Eichenlaub brand in 1998. Eichenlaub’s Backenbesteck cutlery, which is currently fabricated in Robert Herder’s workshops, had already existed in the 19th century. “It was very challenging to fully master the idiosyncratic form of this historical wrought cutlery, but now we’ve got a firm grasp on every detail,” Herder-Scholz says. One can readily imagine what she means by “very challenging” when one admires the blue-glazed blades, the sculptural shapes of the metal and the smoothly flowing handles, which are available in various woods, white or black acrylic, and staghorn.

Our visit to Windmühle Knives was a crash course in the culture of knives and cutlery. During our tour of the manufactory, which looks as though it has fallen out of the flow of time, we immersed ourselves in an atmosphere that’s seldom encountered in the 21st century. We saw that the people who work here have hard and dirty jobs to do, but we invariably felt their pride and their love for their profession. Through our conversations with Giselheid Herder-Scholz, we understood that only artisans with such personalities can save precious traditions from extinction.