Drinking tea brings people together, whether performed as a family ritual or as a gesture of hospitality, or while enjoying it in the company of friends. Those who offer tea communicate.
We visited three very different places in Berlin that all have something in common: tea and the people who love it.

Since it moved from the Palais am Festungsgraben in 2012, the Tadshikische Teestube [Tajik Tearoom] has been located in one of the historical buildings of a backyard compound on Oranienburger Strasse in the Berlin-Mitte district. Originally an exhibit at the Leipzig Trade Fair in 1974, it was donated afterwards to the Society of German-Soviet Friendship. The tea and food menu is international, with a focus on Central Asian tea specialties and meals. Olga Schöning, a trained graphic designer and the Tearoom’s owner for almost four years now, had already been designing advertisements for it since the fall of the Berlin Wall. In the traditional Tajik nomad culture, tearooms were reserved for men, who drank their green tea while discussing, negotiating, chatting and smoking hookahs. Elements reminiscent of this lifestyle can also be found in the Tajik Tearoom’s interior in the form of colorful seat cushions, low tables and hand-engraved pillars. Many people think they are made of san- dalwood, but Olga Schöning informs us that “according to an ex- pertise I asked for, it’s poplar.” 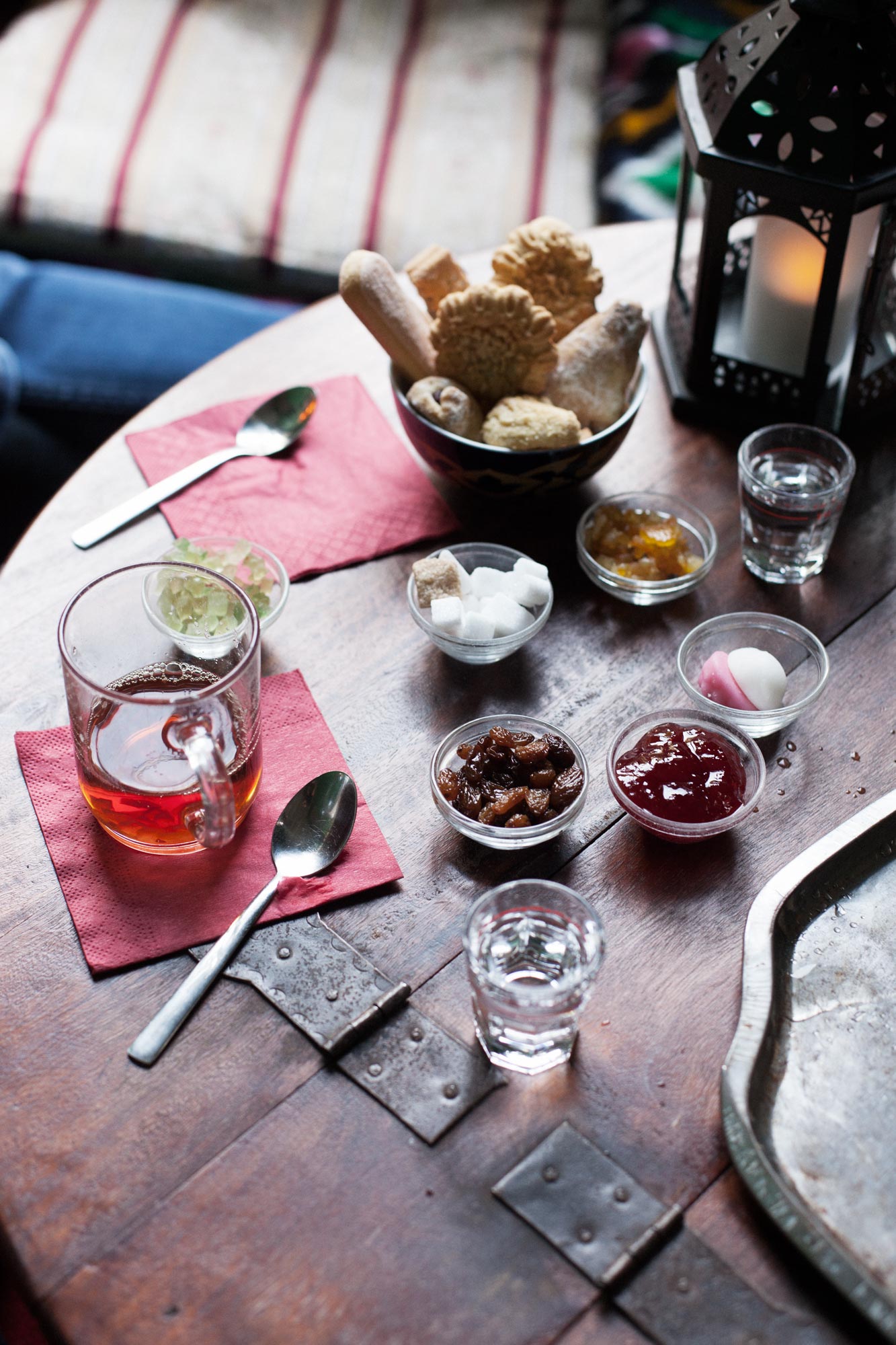 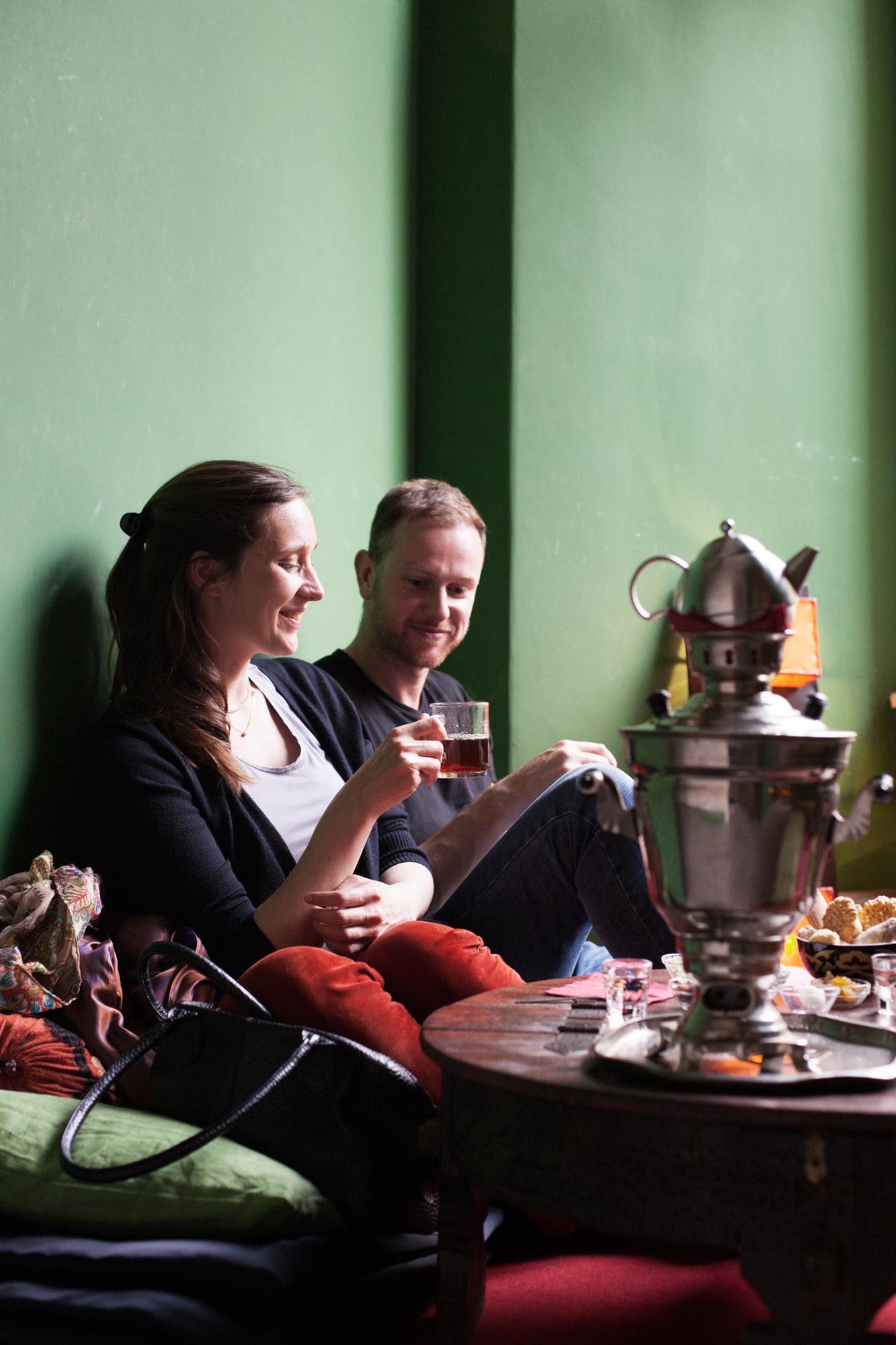 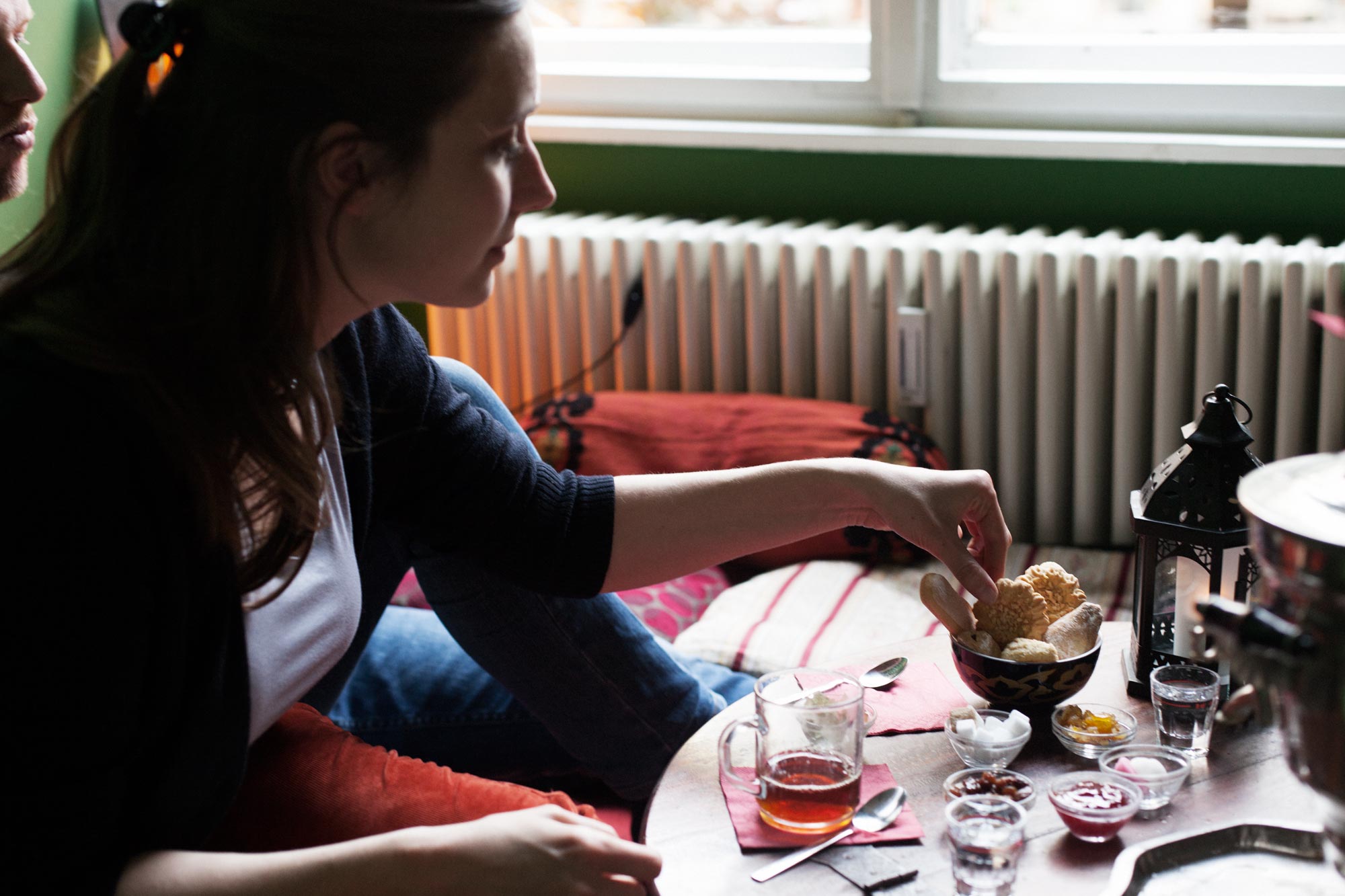 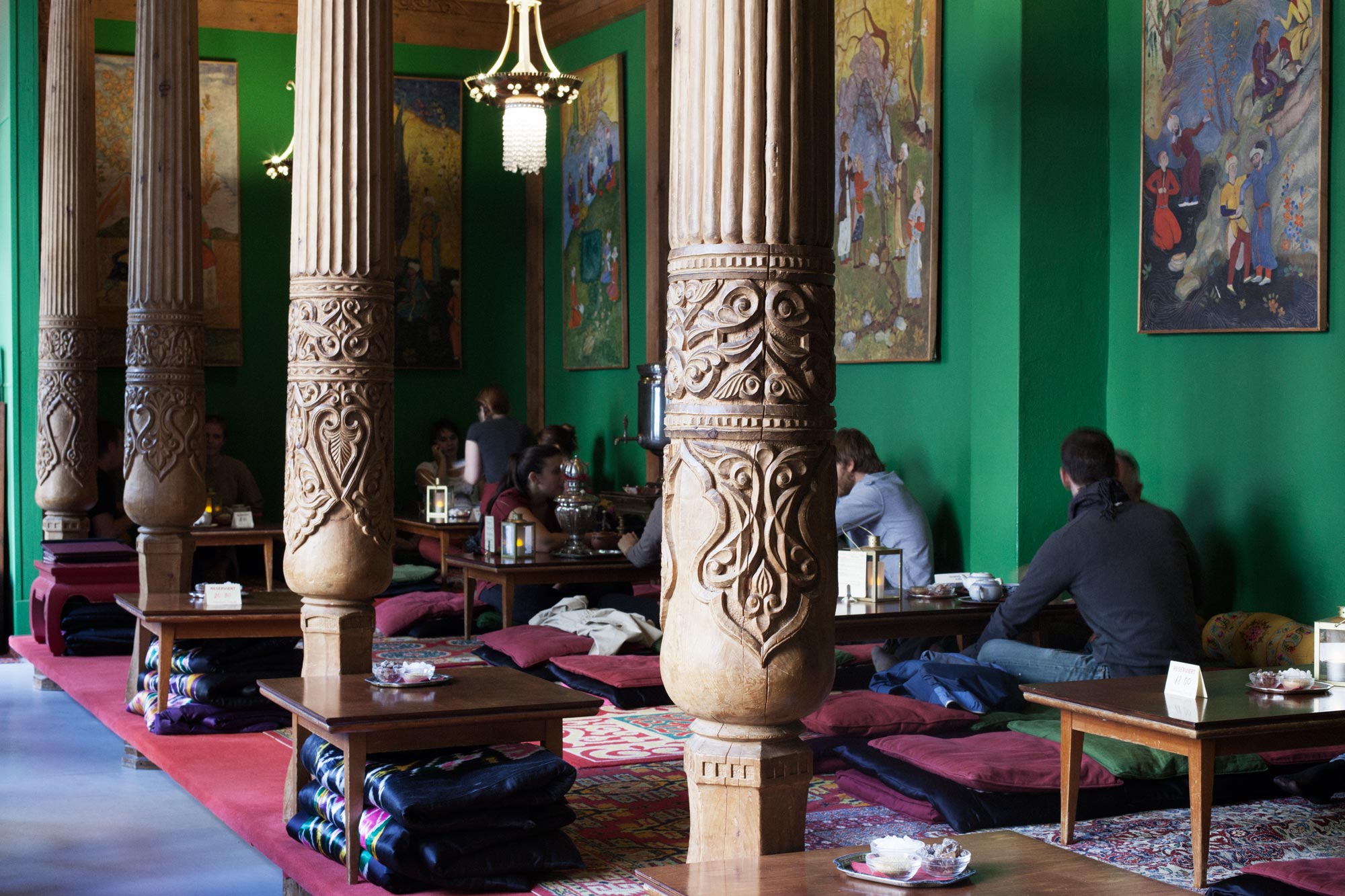 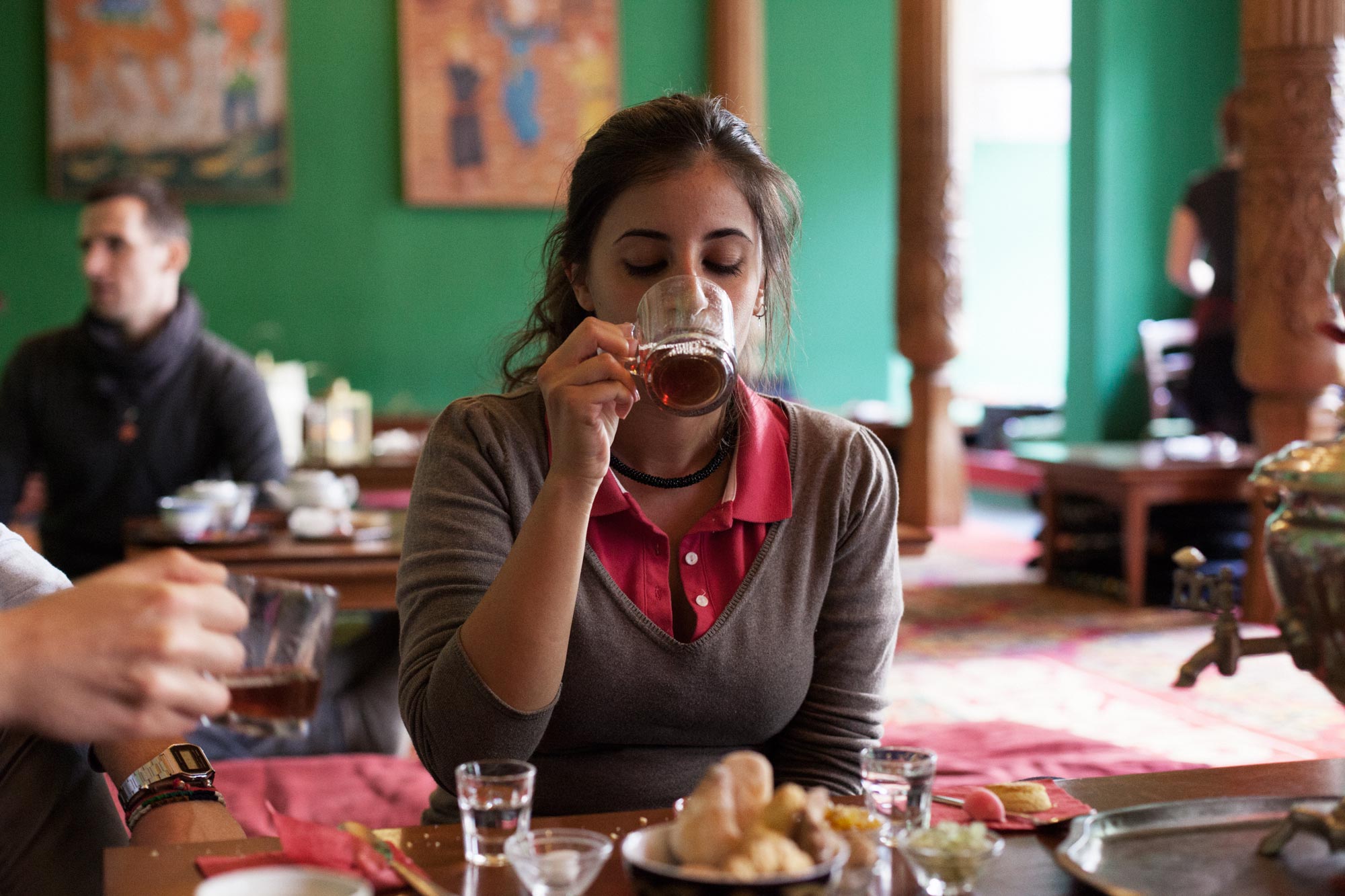 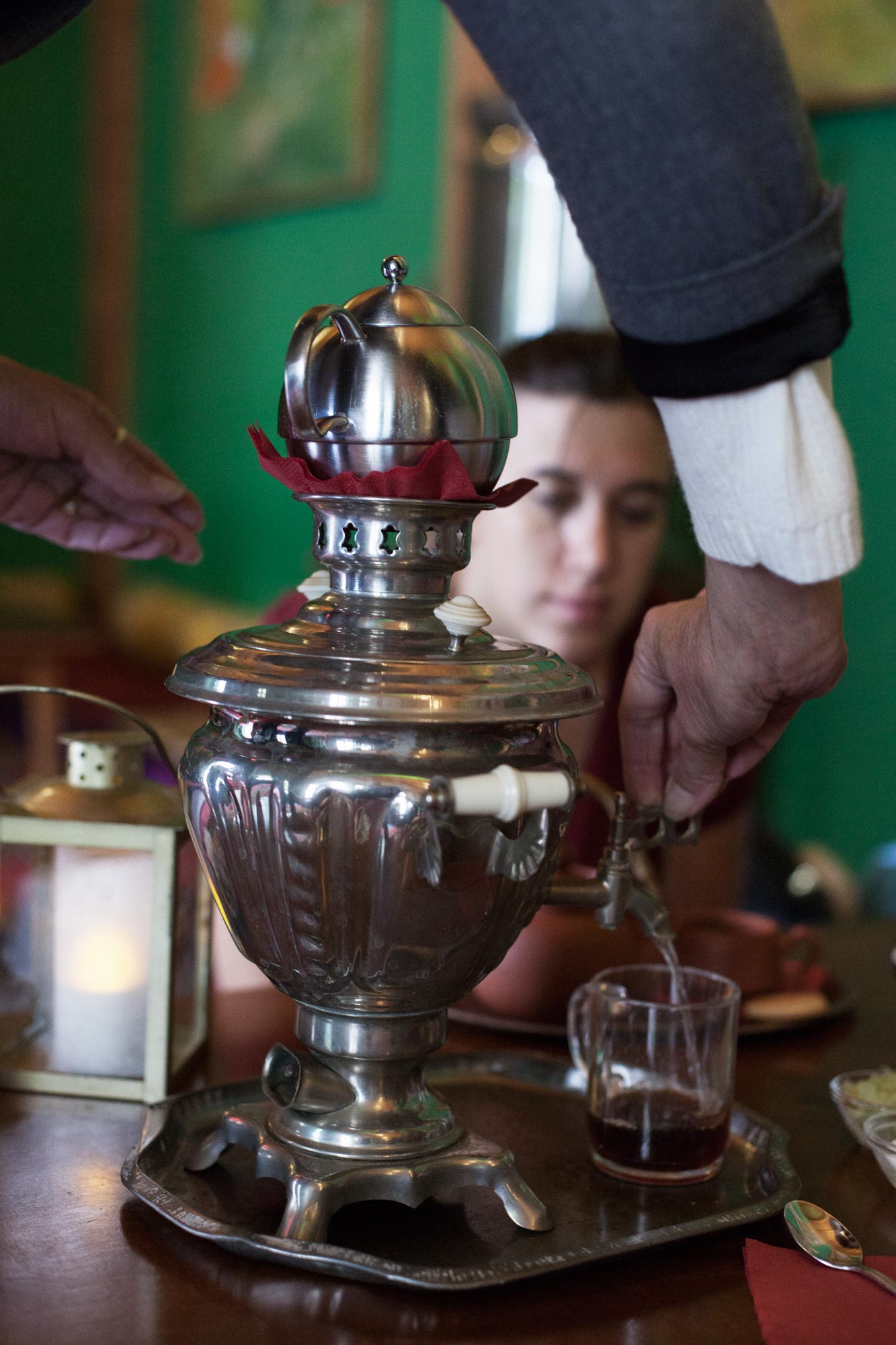 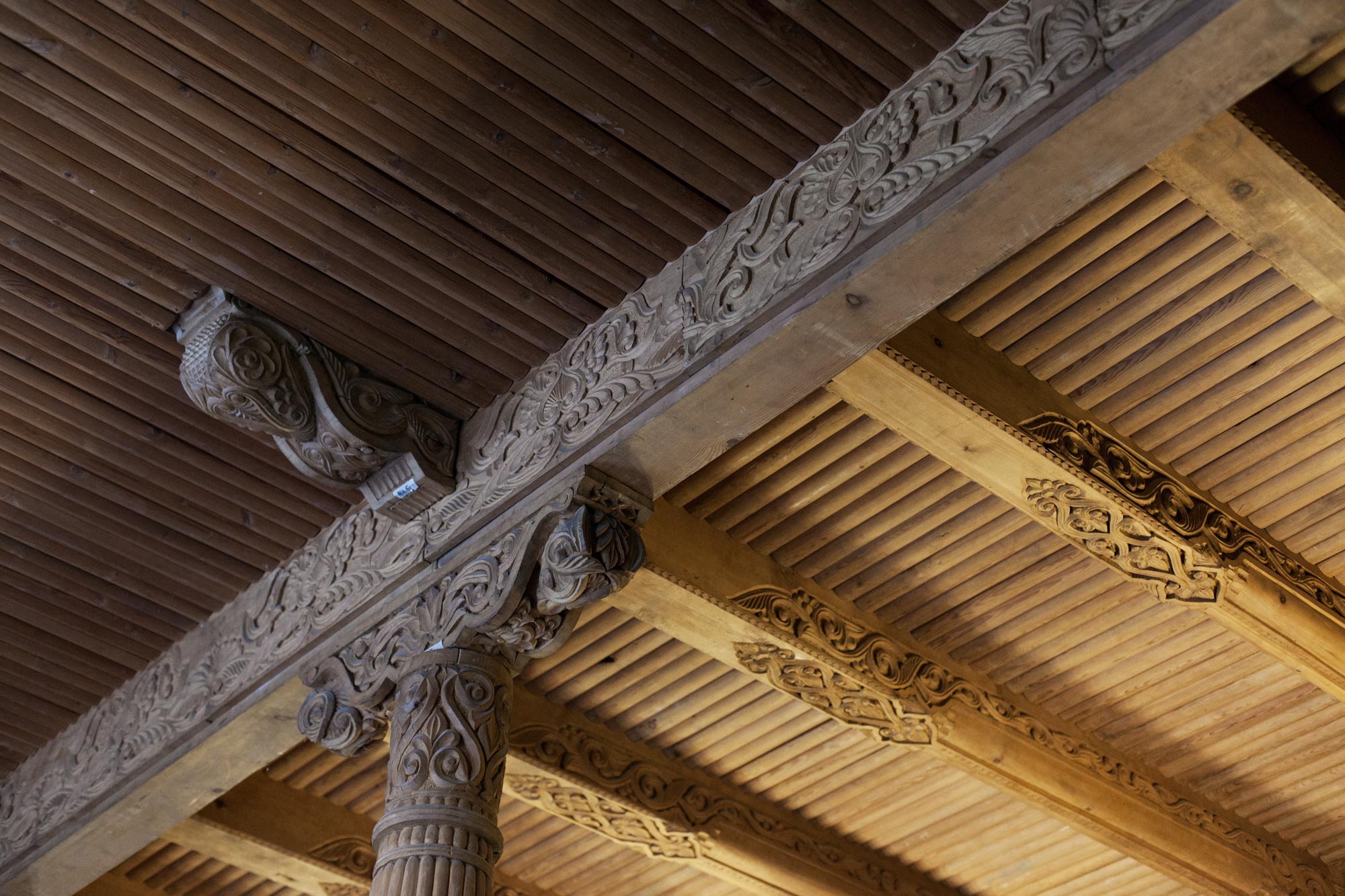 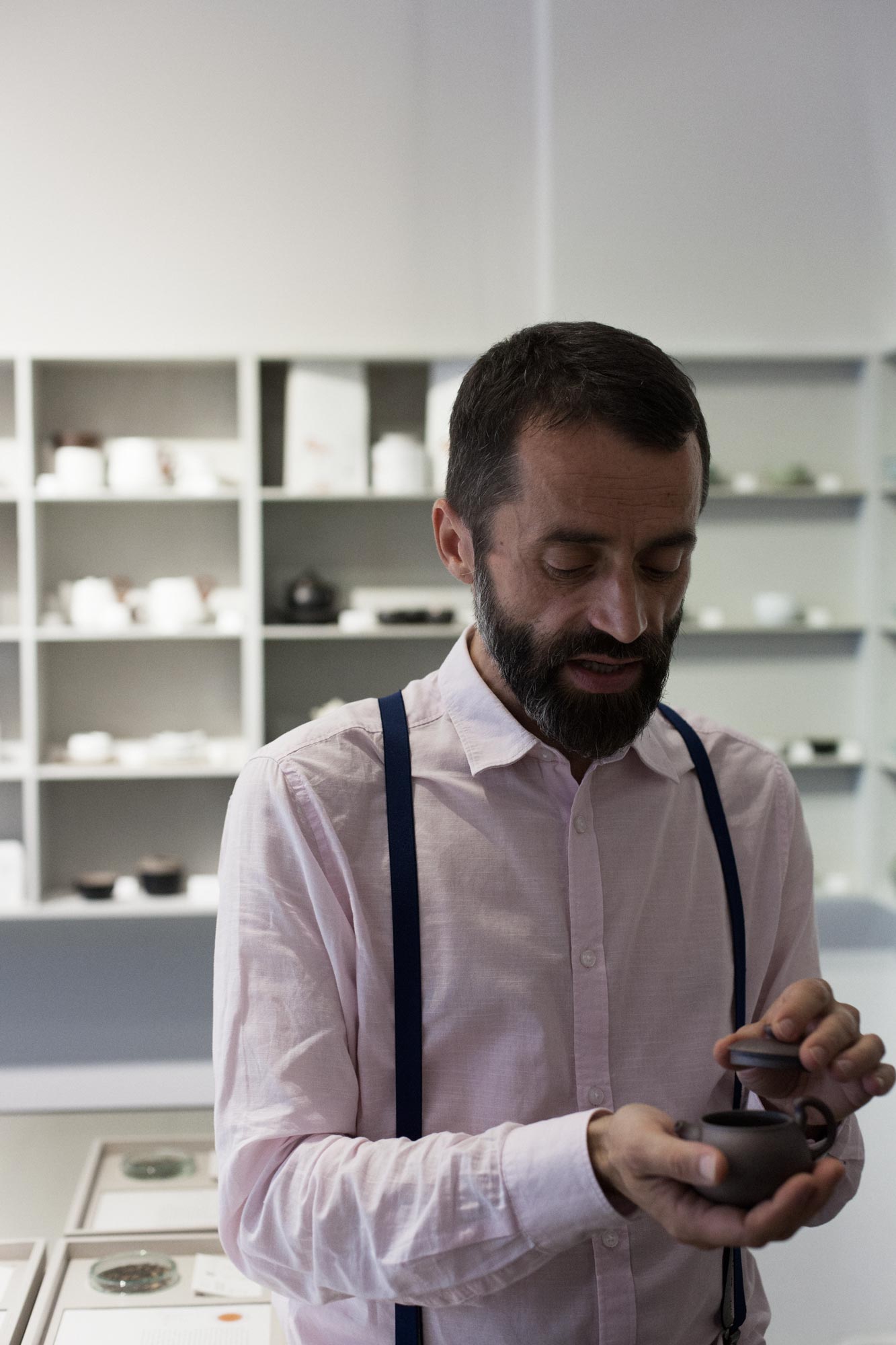 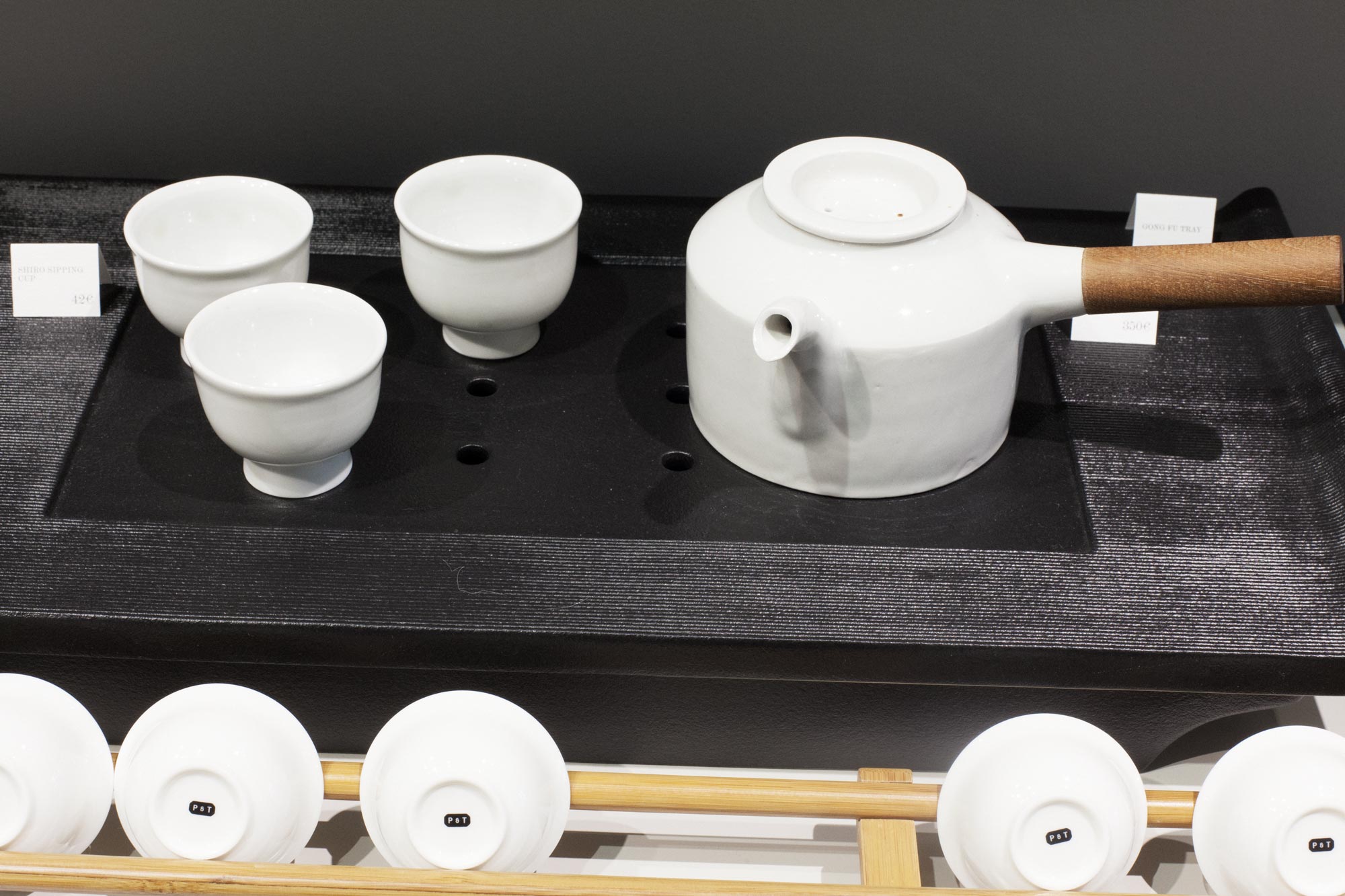 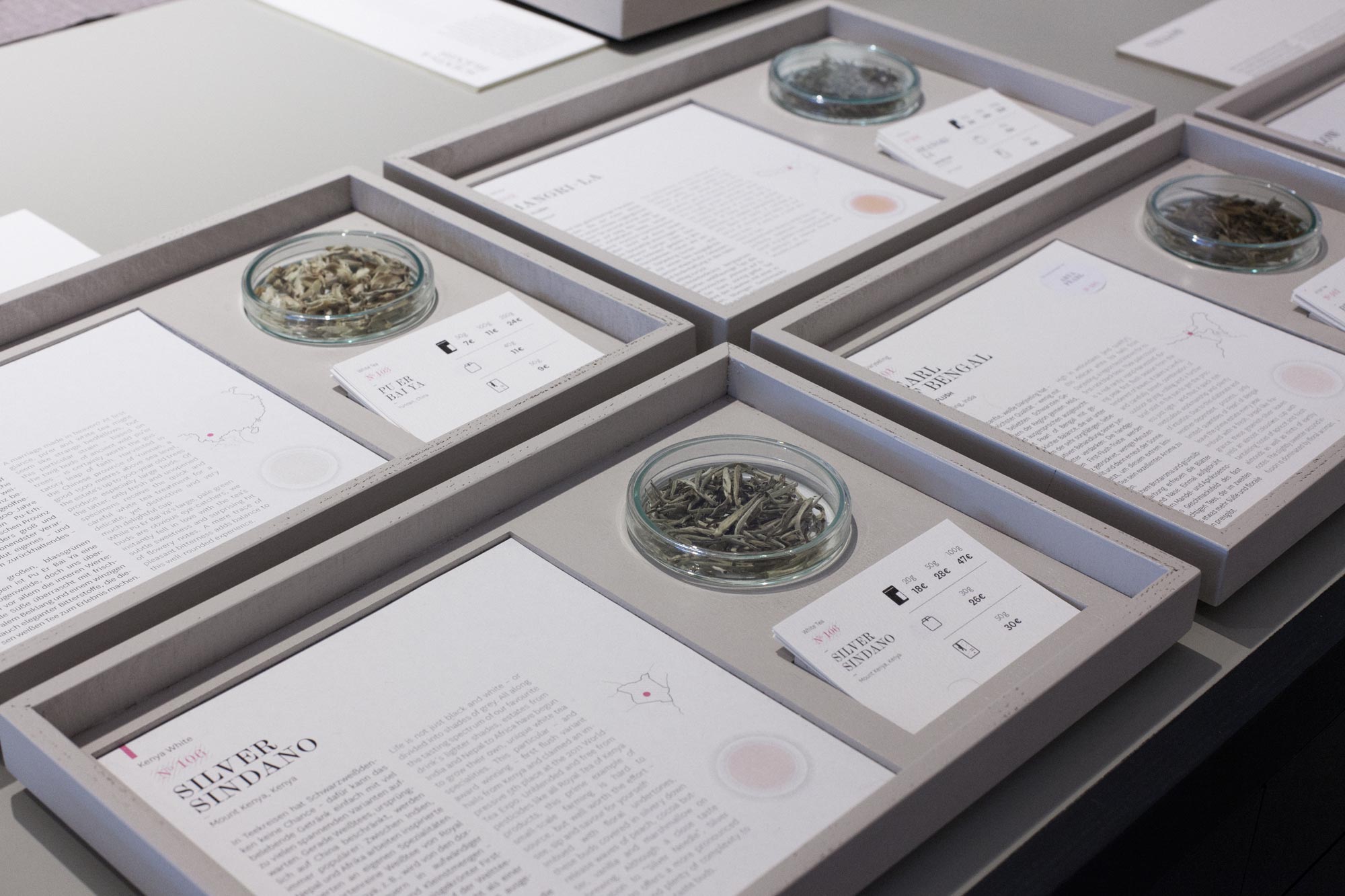 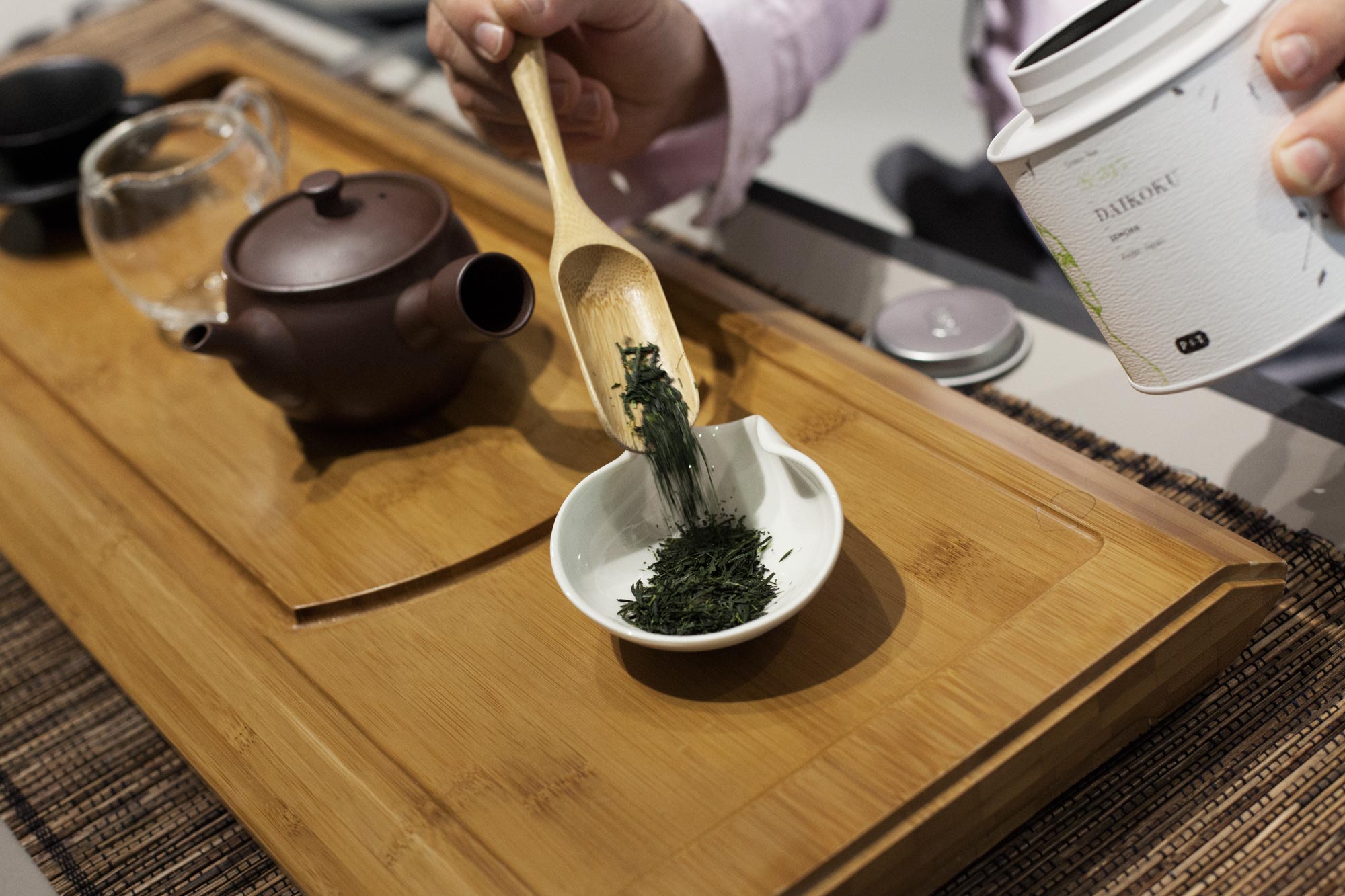 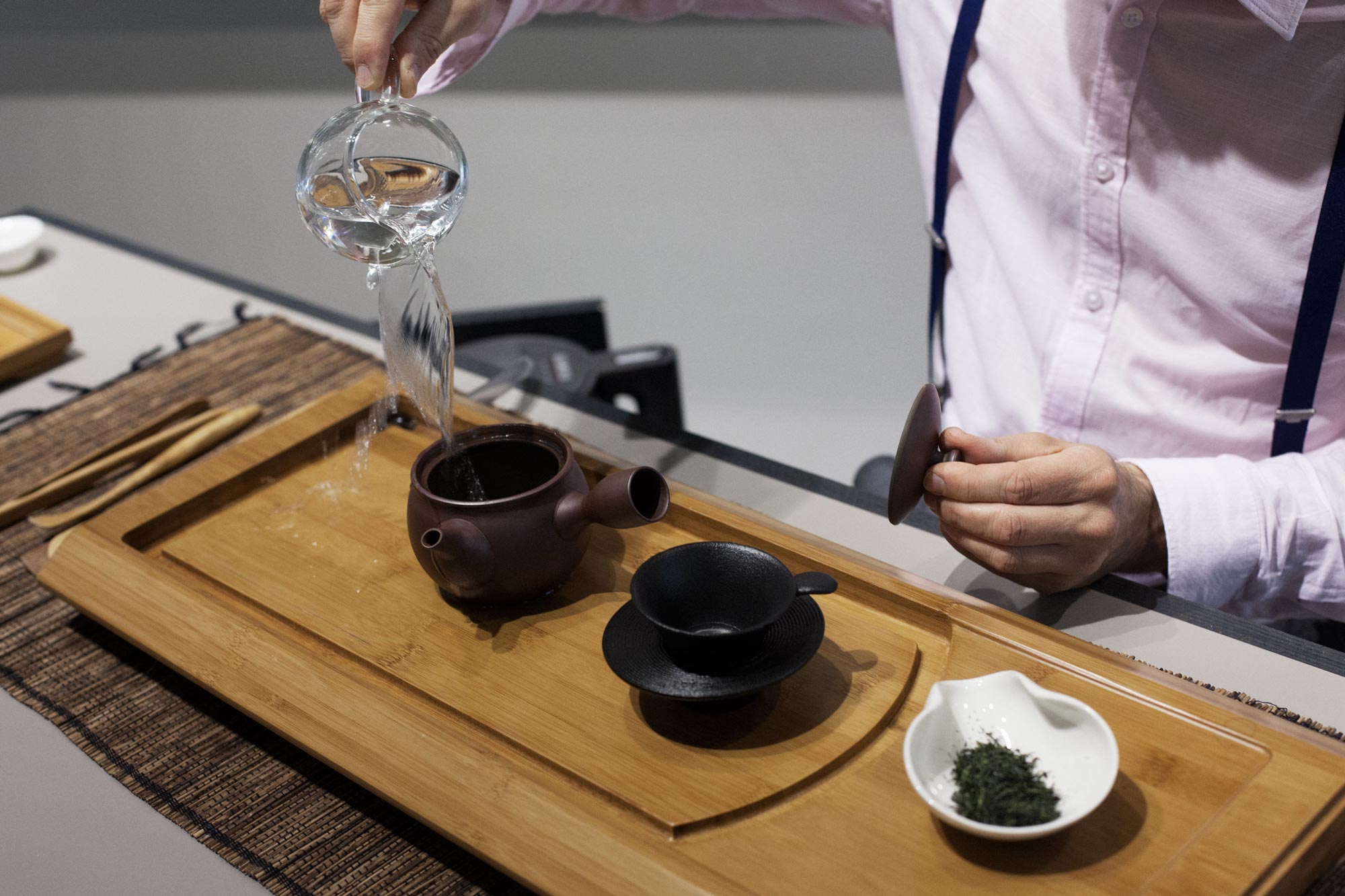 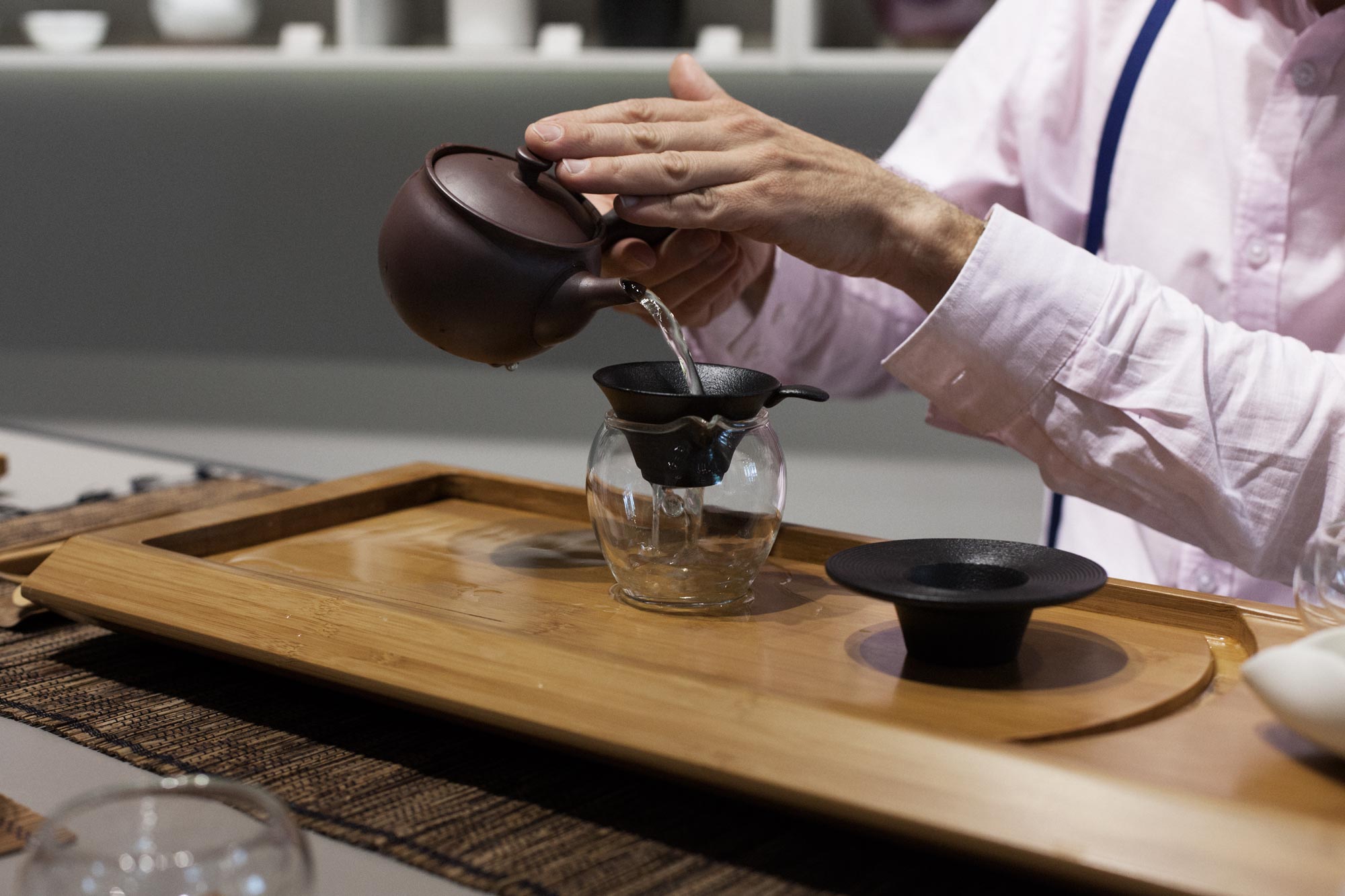 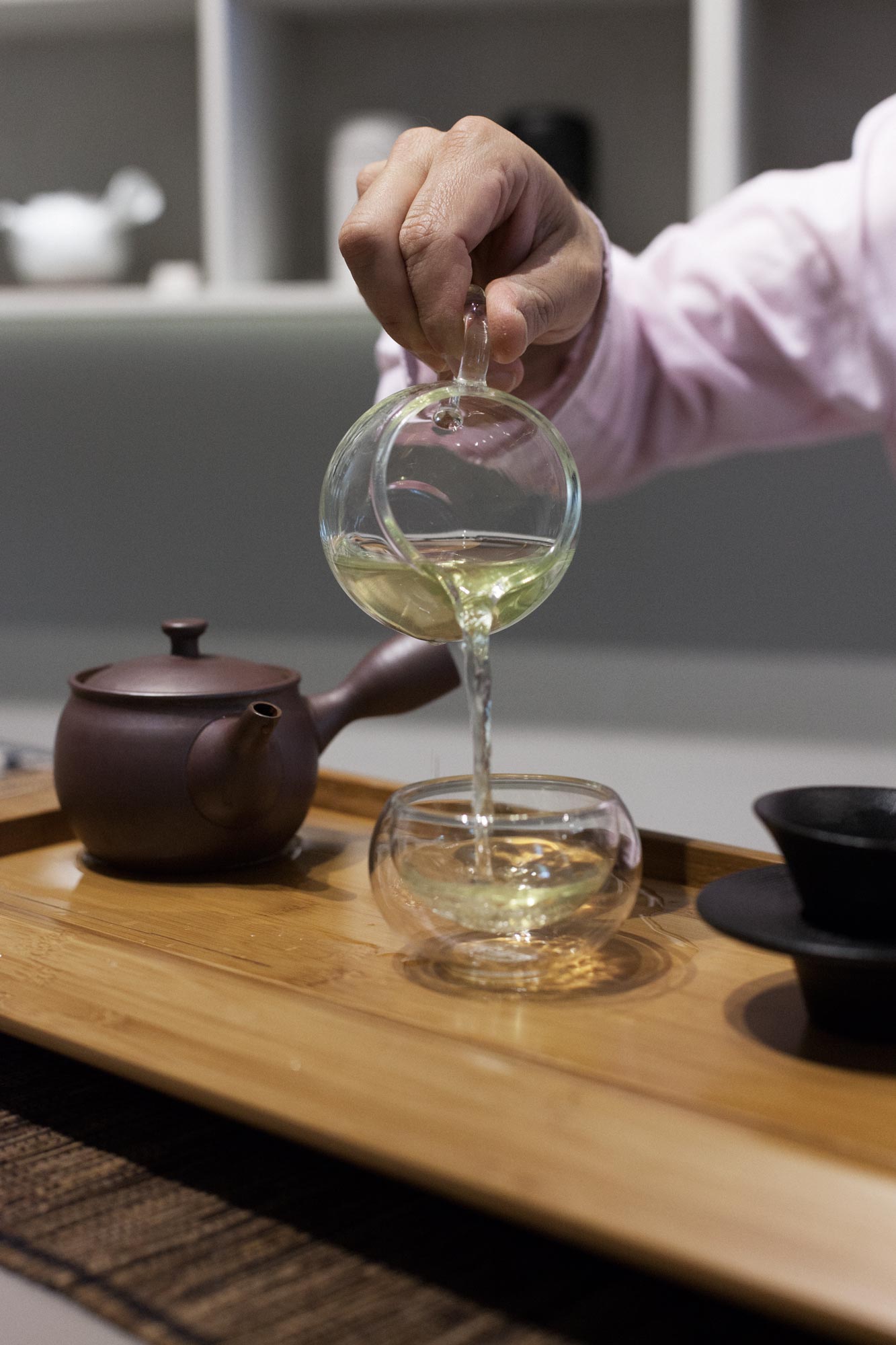 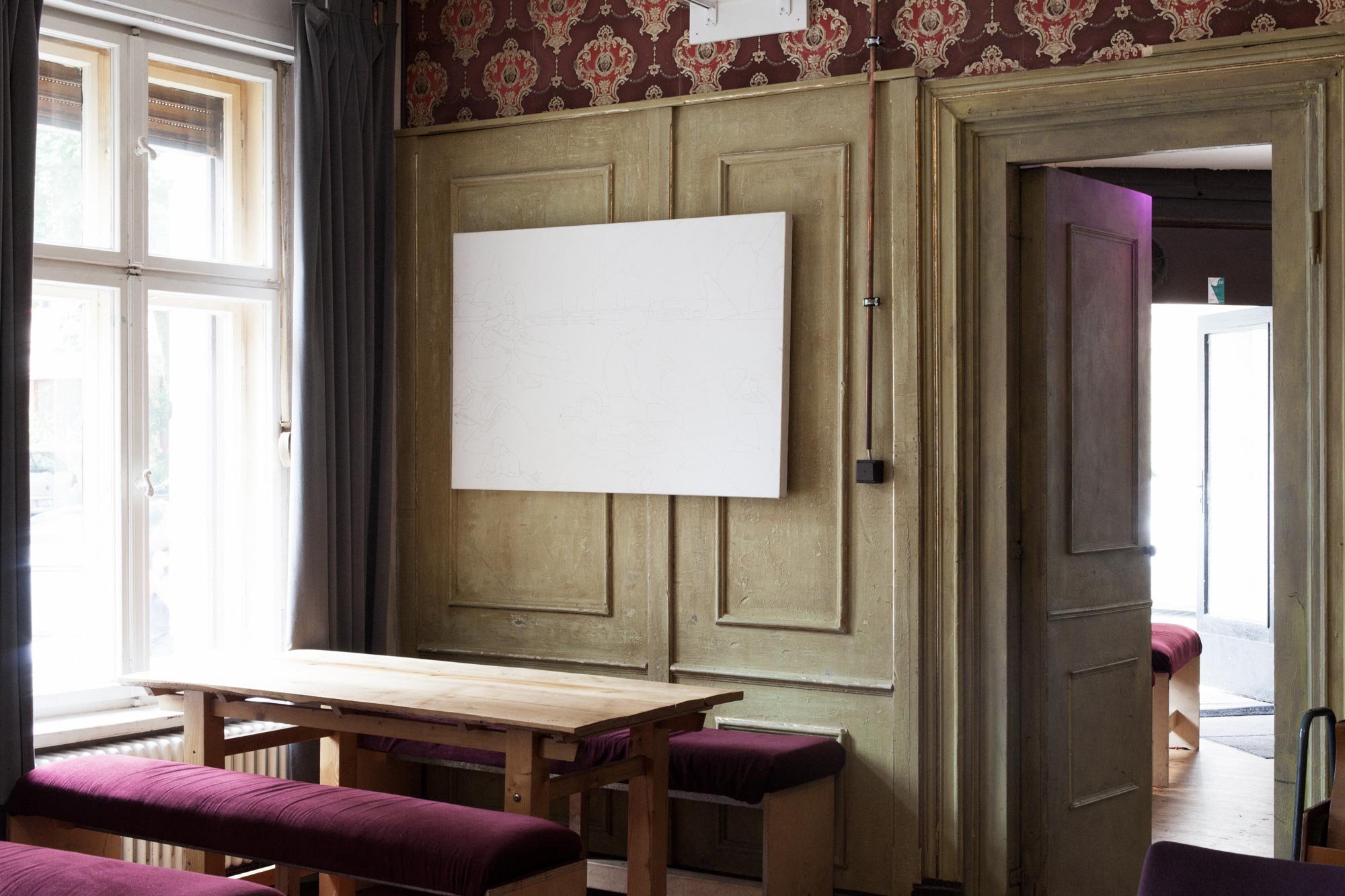 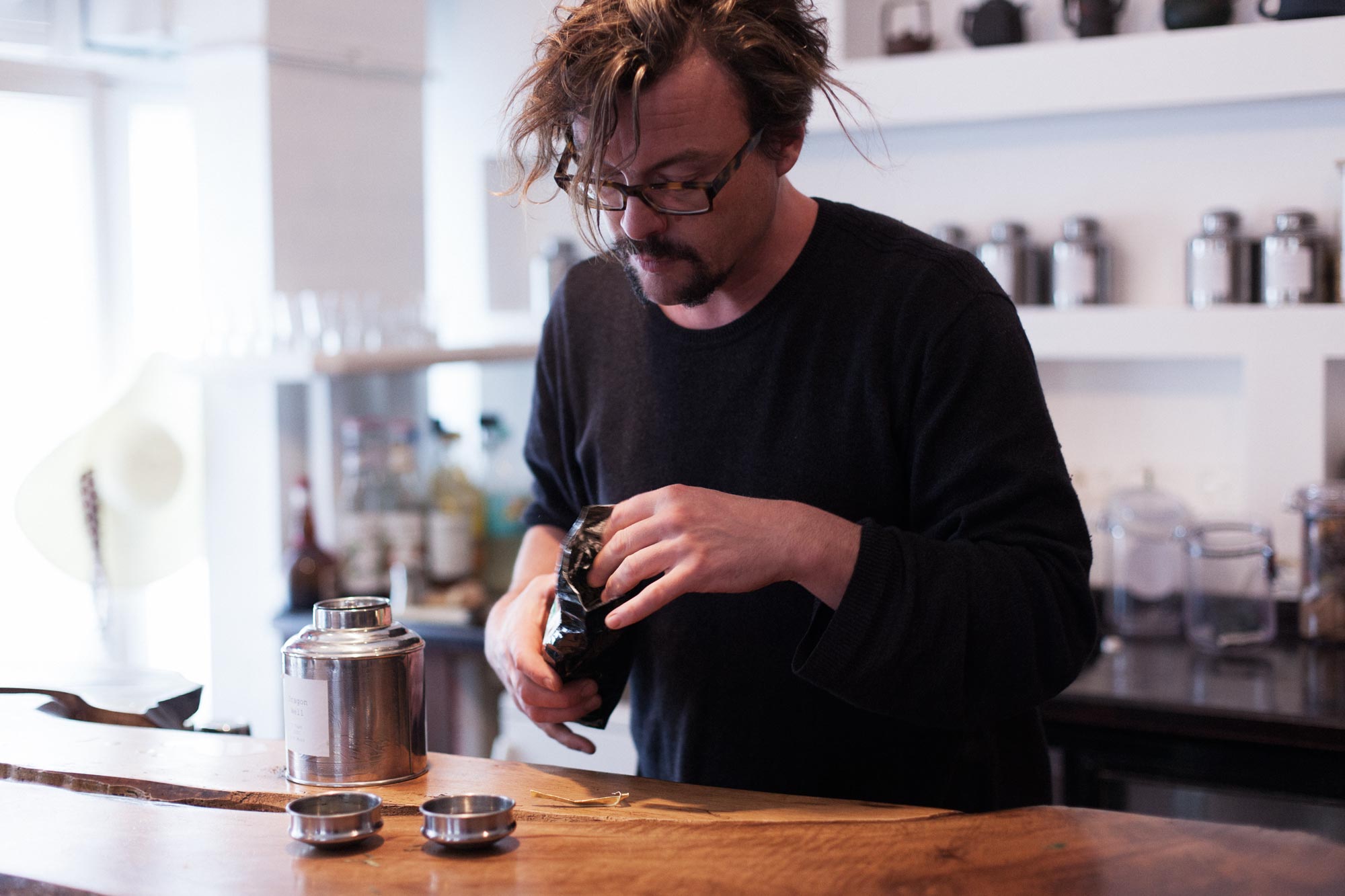 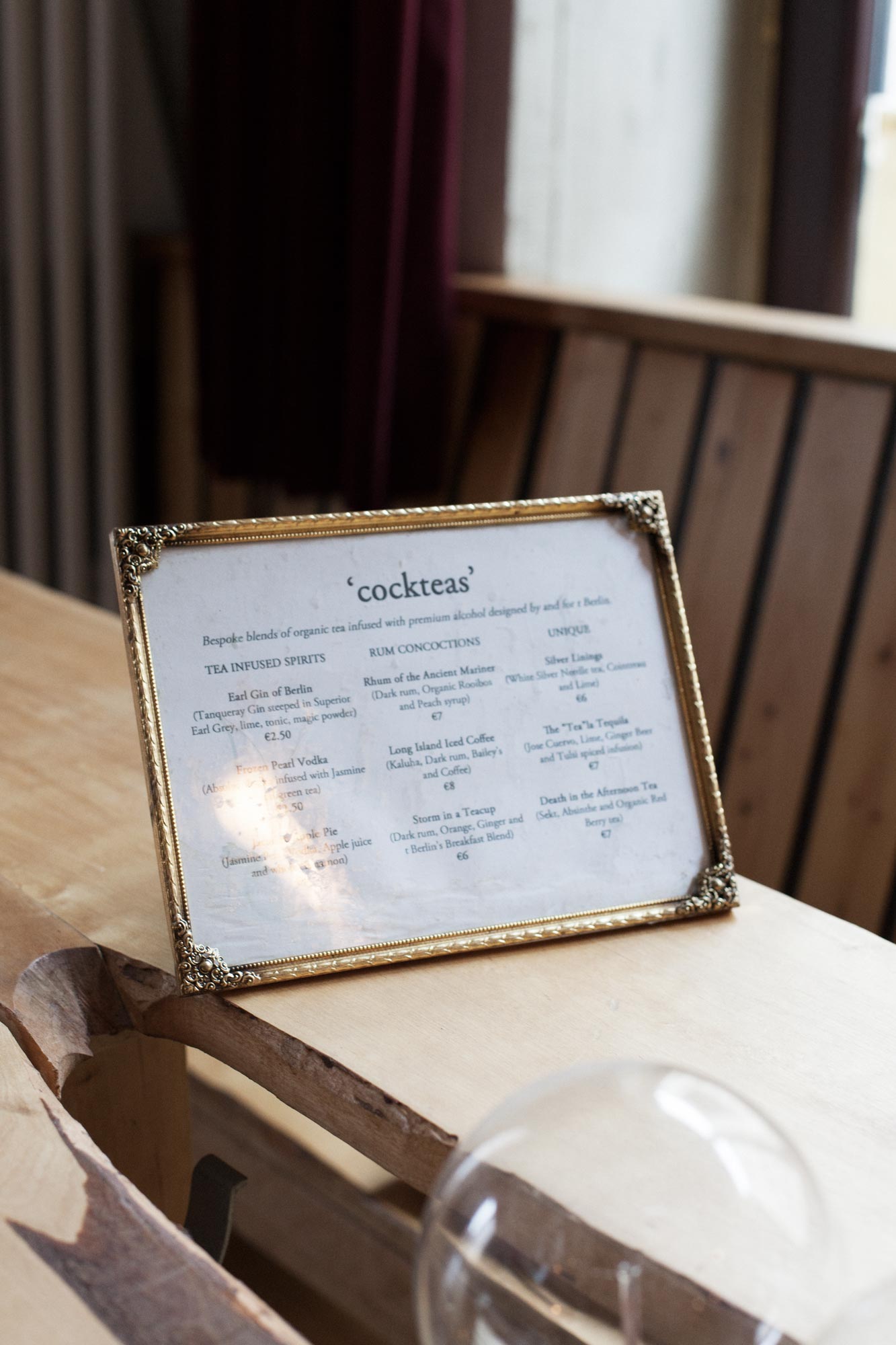 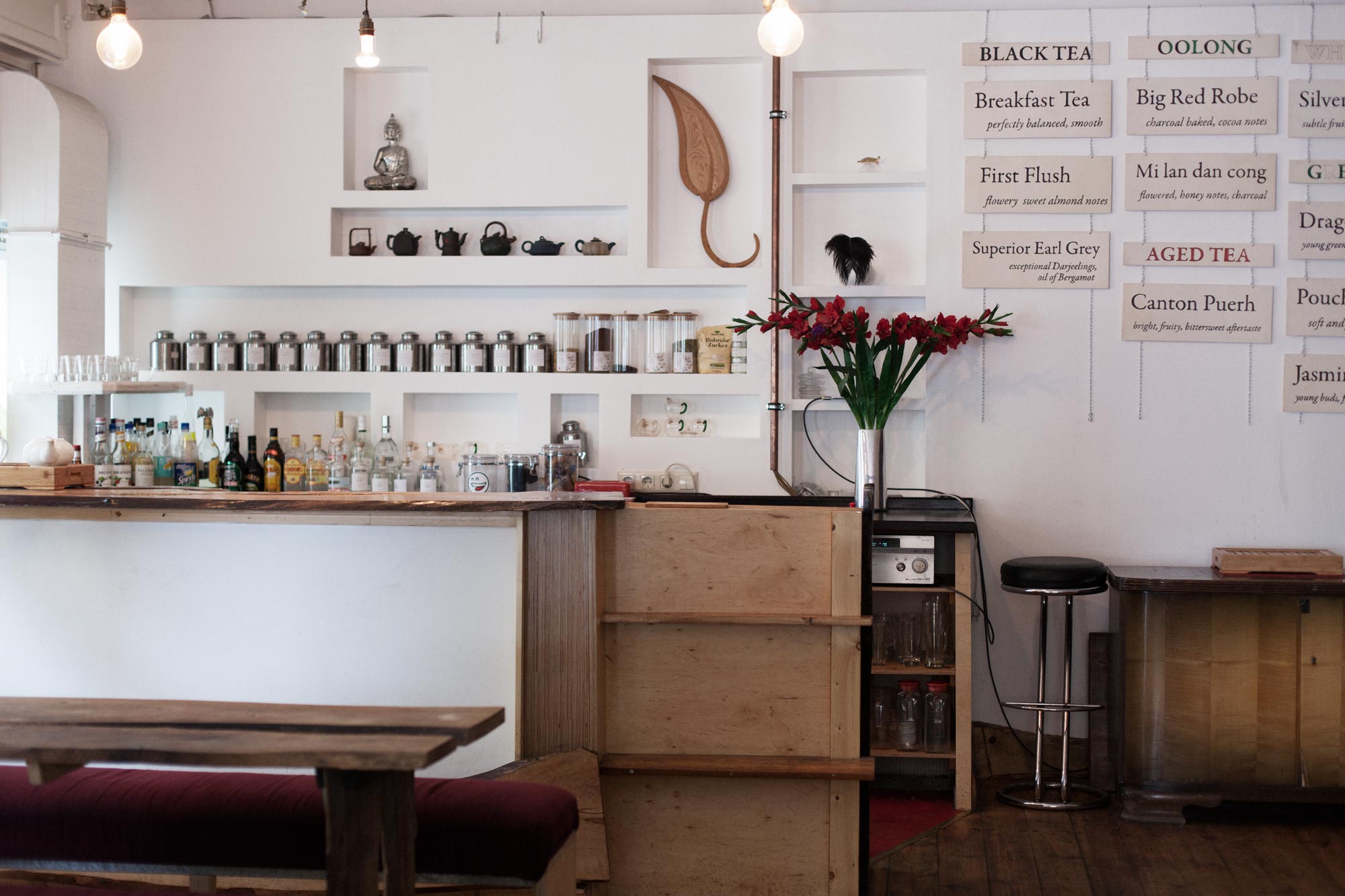 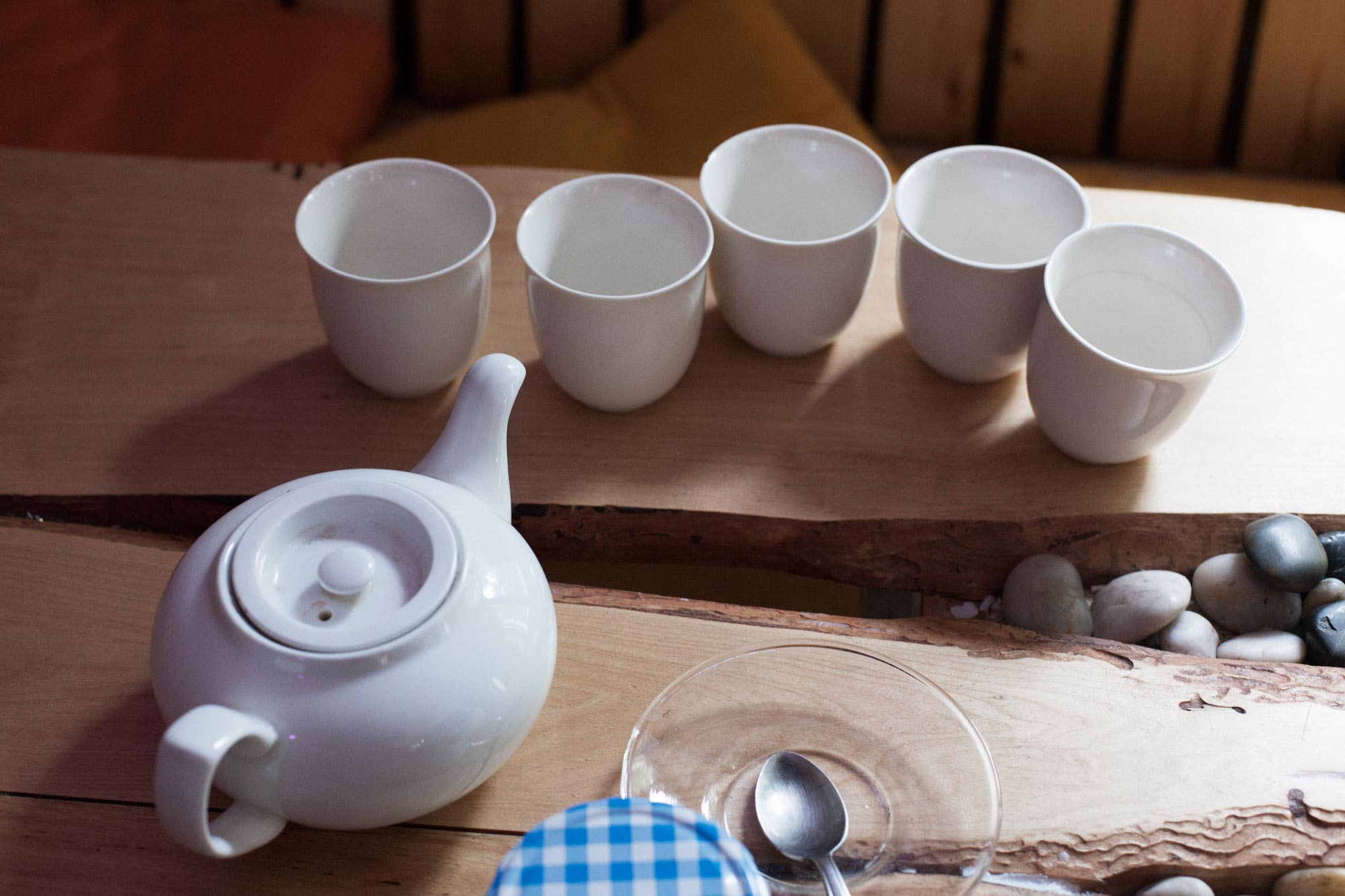 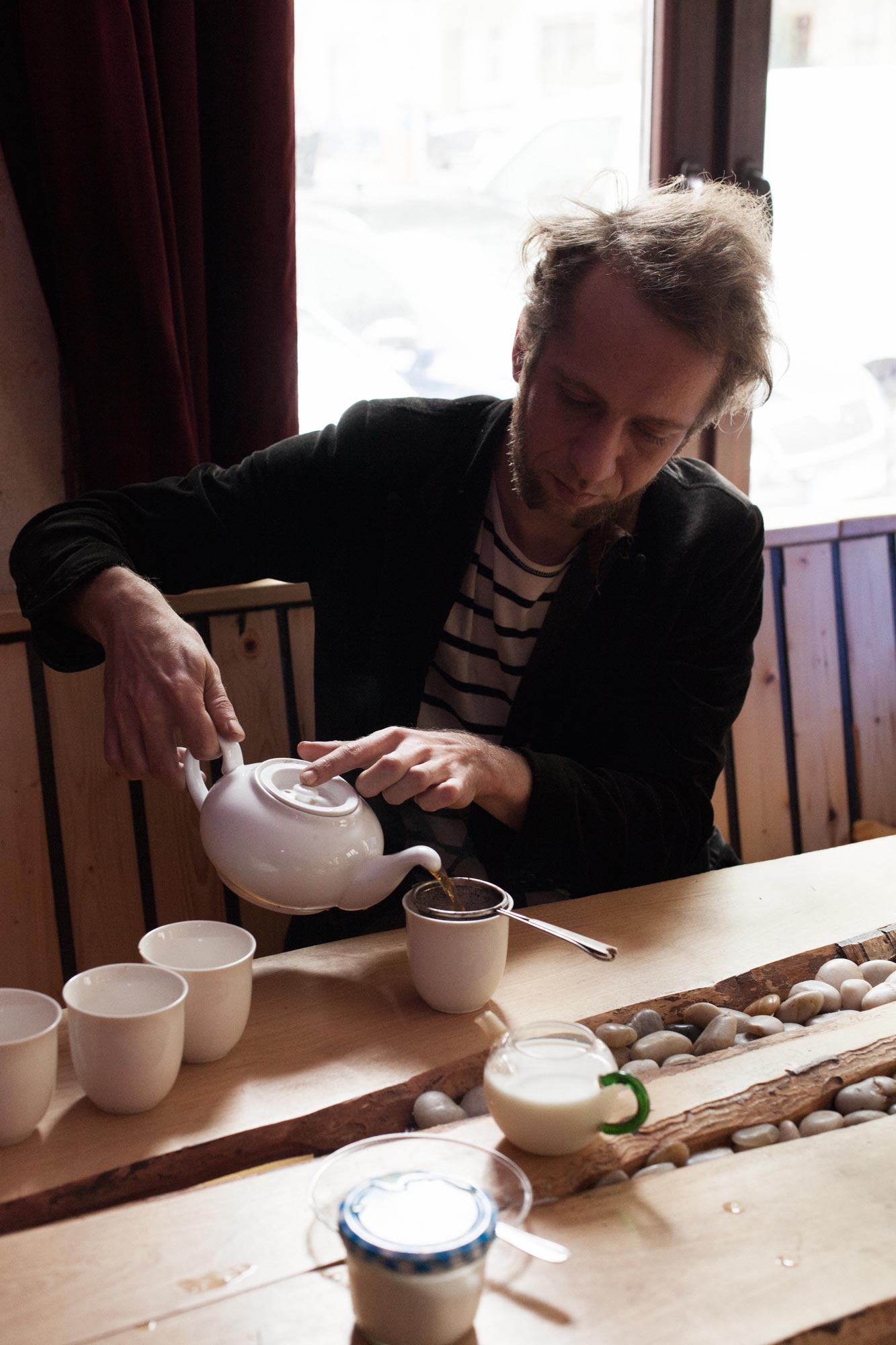 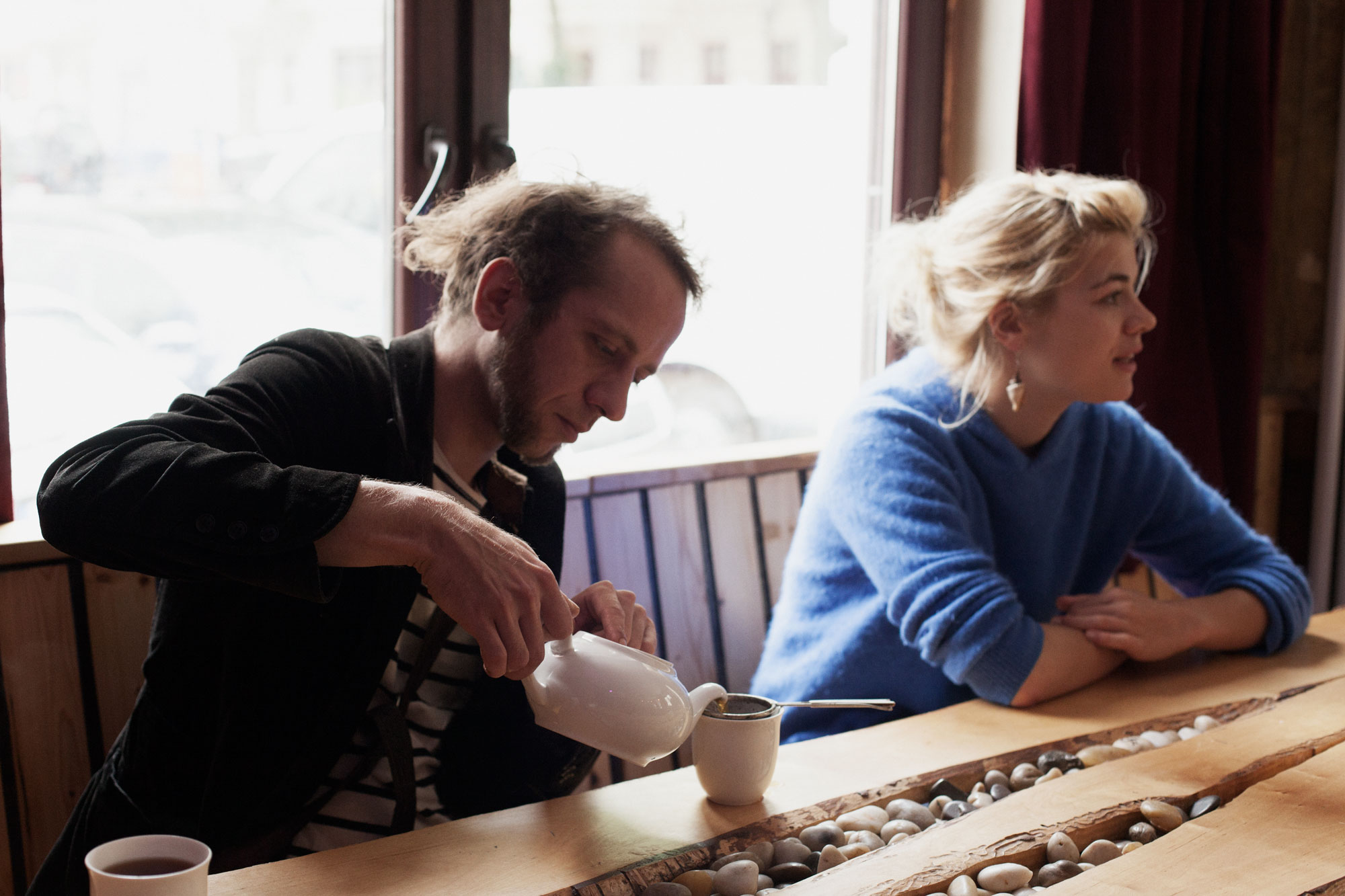 Giulia Minnucci from Anguillara Sabazia in Italy is spending the afternoon with friends here, enjoying a Russian tea ceremony. They have taken off their shoes, and pour hot water from a samovar onto the tea concentrate in their glasses. The tea can be sweetened with brown or white sugar, and there are pastries, rum raisins, fondant candies and jam. Having a glass of vodka is also part of this ceremony. Giulia particularly likes teas from other countries, which remind her of her journeys, for example of her trip to Egypt with her parents: “We also visited a bedouin camp. The bedouins made three glasses of peppermint tea and said that one was bitter like death, another one sweet like love, and yet another one somewhere in between, like life itself. This is my favorite tea,” says Giulia.

Our next stop is the Berlin-Charlottenburg branch of Paper & Tea, where one can buy various tea specialties and stationery, as well as ceramic tea utensils. Inside the shop, we meet Adam Wieczorkowski, who refers to himself as a teaist. This tea expert, who was born in Poland and also knows a lot about ceramics, says that “teapots have a memory,” referring to the patina that forms inside a teapot after multiple use and contributes to the tea’s flavor. This is why connoisseurs only use plain water to rinse their teapots. An unglazed, porous pot absorbs a lot of the tea’s flavor, says Adam, because “due to the pores, the tea has a much larger surface for developing its flavor.” Some tea aficionados attach such great importance to their own teapot’s patina that they even take them along when they travel. Adam also shows us chawan bowls that are used for making matcha.

“Matcha is finely ground green tea, usually sencha, which is first ground to a powder and then, after adding a little water, whipped using a bamboo whisk, something which is also part of the Japanese tea ceremony.” On the wall shelves, we discover some creations by the Austrian ceramist Matthias Kaiser. Having lived in Asia for some time, he has been inspired by the Asian tea culture. Uli from Berlin, who is shopping at P & T today, comments that “the quality here is due to the fact that the focus is not only on tea alone, but also on the aesthetics associated with it.” Most of the ceramics offered at the shop are replicas of traditional tea sets. “In a book, I recently discovered a pot with a very similar design that was made in China in the 15th century,” says Adam. The tea bowls with celadon glazes have also been inspired by historical models. The greenish celadon glazes were traditionally used in China between the 9th and 15th centuries to decorate stoneware objects. In China and Taiwan, people say that green tea looks most precious in celadon vessels, because their shades of green are reminiscent of jade. To Europeans, many of the Asian vessels come across as small. And there is a reason for this. People in Asia say “the smaller the teapot, the better the tea,” and believe that the flavor can develop best in a small pot.

To conclude our visit, Adam invites us to taste some Japanese sencha tea. To prepare the tea, he uses a kyusu, a serving pot and a sieve. The tea is prepared on a wooden tray with a tube attached to it to allow water to drain off, something which Adam explains by referring to the Chinese practice of pouring hot water over the traditional yixing pots. “It’s like playing with water when we were children.” He pours the water, which has a temperature of 60°–70° C, into the serving pot, where it cools off further and is then poured into the kyusu that contains the sencha. The next step involves pouring the tea over a sieve back into the serving pot, from which he fills our small glass bowls, but not without letting us smell the saturated tea leaves first. “They can also be eaten afterwards, for example spread on a slice of bread, or with cream cheese,” he comments and says that slurping the tea is welcome, because this enhances its flavor. “What does this tea taste like to you?” he asks. Mirjam Wählen says that it has a very earthy flavor. To me, it tastes very piquant, almost like a soup. “Very good,” says Adam. “The Japanese know a fifth taste that they call umami,” which corresponds to our English term savory.

We move on to Berlin-Kreuzberg, where t berlin is located in the shade of a picturesque water tower. Its owner is Duncan Mckenzie from Yorkshire in England. He opened the place, which is much more than merely a tea bar, about three years ago, and also stages a variety of events ranging from comedy shows and birthday parties to yoga and language courses and concerts. So it’s a place for almost anything, including tea as the only invariable. “We’re an alternative to a pub. Nowadays, many people are looking for a non-smoking place for non-alcoholic activities, for which tea is a perfect accompaniment,” says Duncan. t berlin’s specialties include what are called cockteas, i.e. hot or cold cocktails prepared with tea. He got the idea for them during a tea tasting, when he noticed that people started to get bored after an hour. So he added alcohol to the tea. “Gin and Earl Grey, vodka and jasmine tea, rum and rooibos tea, white Silver Needle tea and Cointreau are perfect mixes. As a tea-loving Englishman, Duncan is often asked about the tea culture in his home country, which, however, he has no intention of perpetuating. Nevertheless, he tells us about the origin of the custom of adding milk to tea: “Black tea used to be an exclusive and expensive beverage in England. So people started to dilute it, also due to the fact that the tea available on the market, which had been imported in the form of compressed bricks, could only be enjoyed after adding milk and sugar.” Another visitor at t berlin this afternoon is Aggi Cantrill, a friend of Duncan’s. She is also an English expat and likes to remember the daily tea time ritual in her family. “Tea reminds me of my home. Drinking tea is a ritual there, because we do it at a particular time of the day, with all the family members joining in. We sit down, drink tea and eat biscuits – usually shortly before dinner, when everybody is at home.”