What can one give as a gift to one’s loved ones at a time when a few people have more than enough possessions, while other people have very little? Giving alms to the poor is one possibility. Another option is to give art and design objects that preserve their value—or grow more valuable—with the passage of time. We suggest both: each is meaningful, each lastingly gives joy, and each helps to preserve and enrich our culture. The following suggestions result from our latest call for submissions. 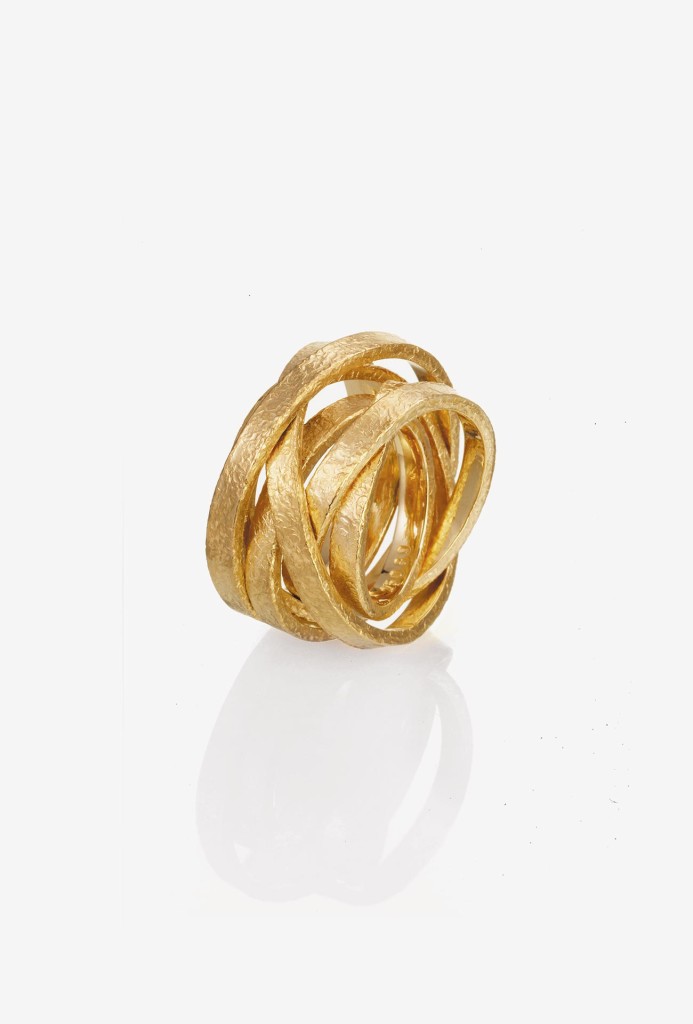 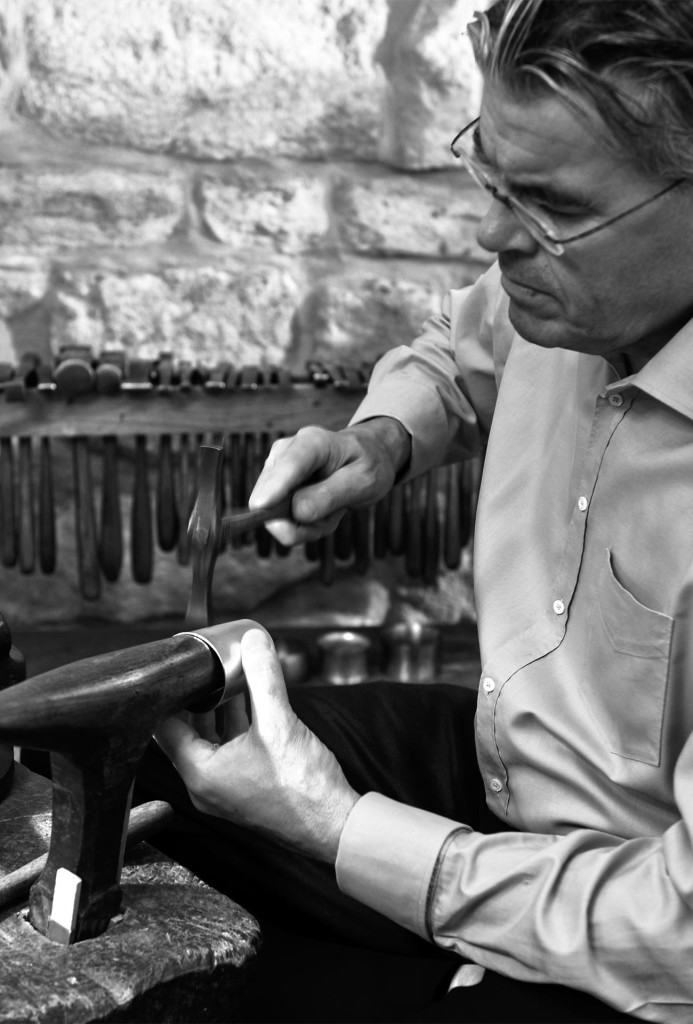 Lothar Kuhn, the owner of Kuhnstücke, Esslingen, during the forging process

Lothar Kuhn explains that this fine gold ring, which is crafted in his own atelier, embodies “a piece of infinity.” A wrought surface of pure 999 gold creates this ring’s special aura. Six windings, which look like an endless band, convey a sense of harmony and a sculptural quality, even when the ring isn’t being worn.“We’re passionate goldsmiths and we have a distinctive style, which we continually recheck and evolve. Love for craftsmanship and the raw materials is the essential basis, says this master goldsmith, who adds, “Our Canny Pieces are conceived and fabricated for our clientele right here in Esslingen.” First-rate handcraftsmanship goes without saying for each of his goldsmiths. Increasingly many of his customers want to have “their” own personal jewelry—unique pieces made expressly for each individual. “A role is also played by the fact that my colleagues have worked here in our atelier for a long time and are able to live their work.” 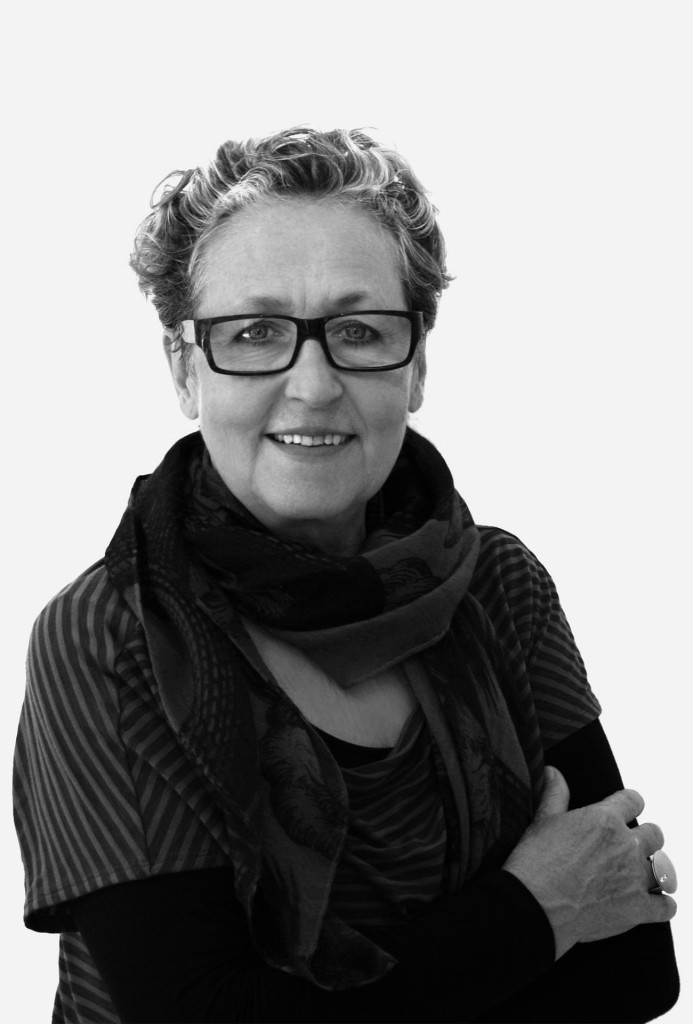 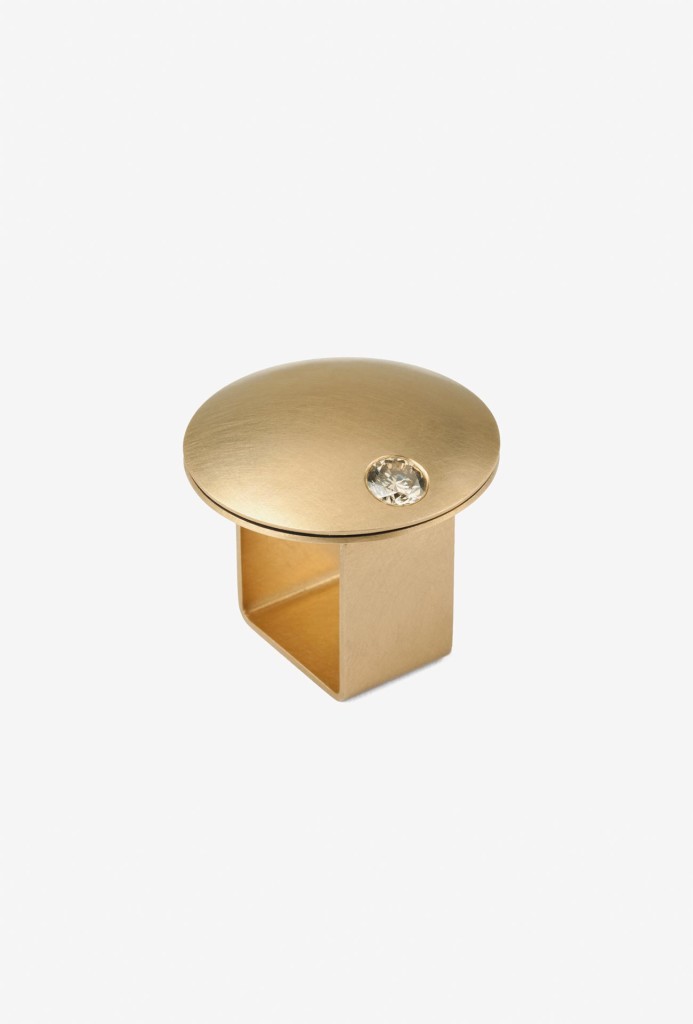 Barbara Schulte-Hengesbach’s kinetic ring Sternschnuppe [Falling Star] turns in response to the natural motions of its wearer’s hand. This adds a playful, fascinating quality to the ring’s simple, basic shape. The moved diamond recalls a comet. This designer and gallery owner believes that cultural relevance is created through long-lived design, art, technology or other characteristics. A product or object of this kind results from the profound investigation of a particular theme. “Perhaps it highlights a specific development or unites past and future in the moment of its creation.” The people who come to this gallery in Düsseldorf are often interested in design and art. They’re looking for something individualistic. “I like to tell them a bit about the fabrication, the design and the ideas behind the pieces.” This interests her visitors. But independent of the story behind a piece, the object itself must please its viewers and appeal to their emotions. 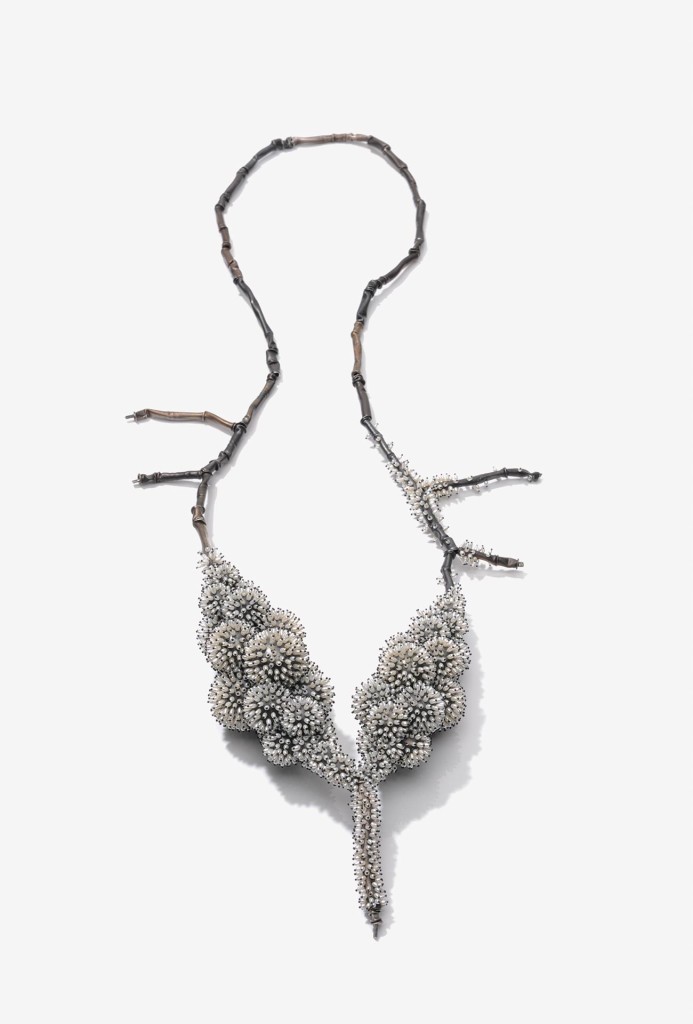 Bruna Hauert, an institution for art jewelry in Zurich

Zürich’s Friends of Carlotta gallery celebrates its 25th birthday with Happy, an anniversary exhibition from Nov. 7 to Dec. 24, 2015. Bruna Hauert suggests two cultural gifts. First, she recommends one of the desirable chains in Sam Tho Duong’s Frozen series, which recall the beauty of hoarfrost. “Objects like Frozen are more than merely pieces of jewelry. They have character and can tell many stories. The lively play among the gentle nuances of color couldn’t be subtler. The artistic arrangement of the pearls creates volume and depth, as well as plays of light and shadow.” These traits, Bruna Hauert says, imbue a piece of jewelry with immortality and make it a close confidante. In addition to two chains, rings and brooches by Sam Tho Duong, she has also brought a variety of pieces from around the world to Zürich for her anniversary exhibition. That’s why her second recommended gift is a railway ticket to Zürich to attend her birthday show. 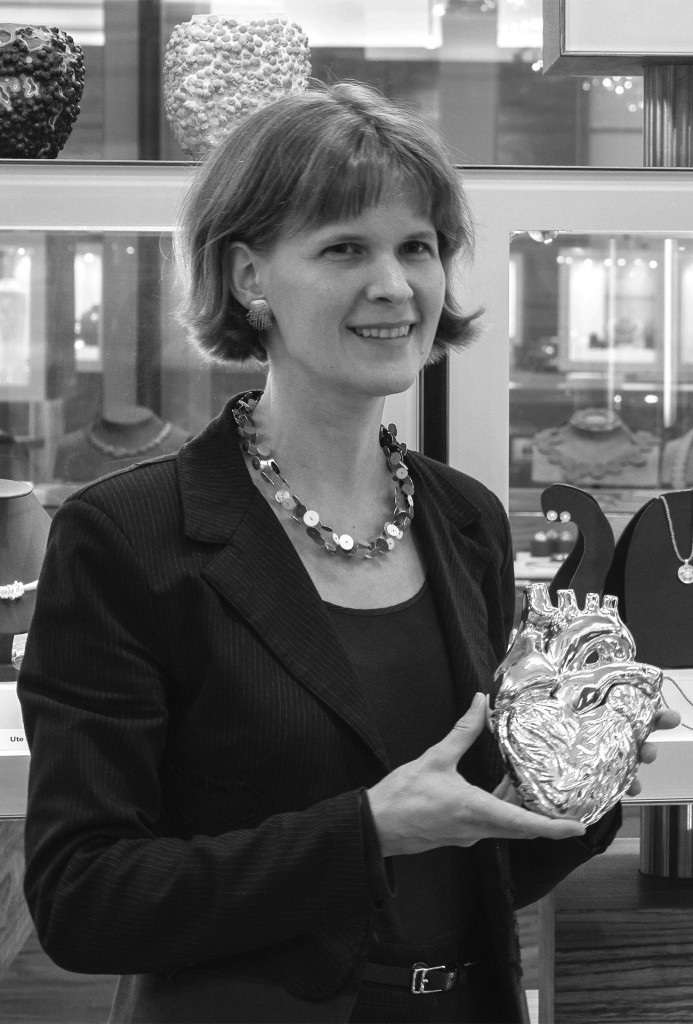 Stefanie Walkenhorst with heart made of porcelain by Renate Hattinger, necklace by Uta Knoop 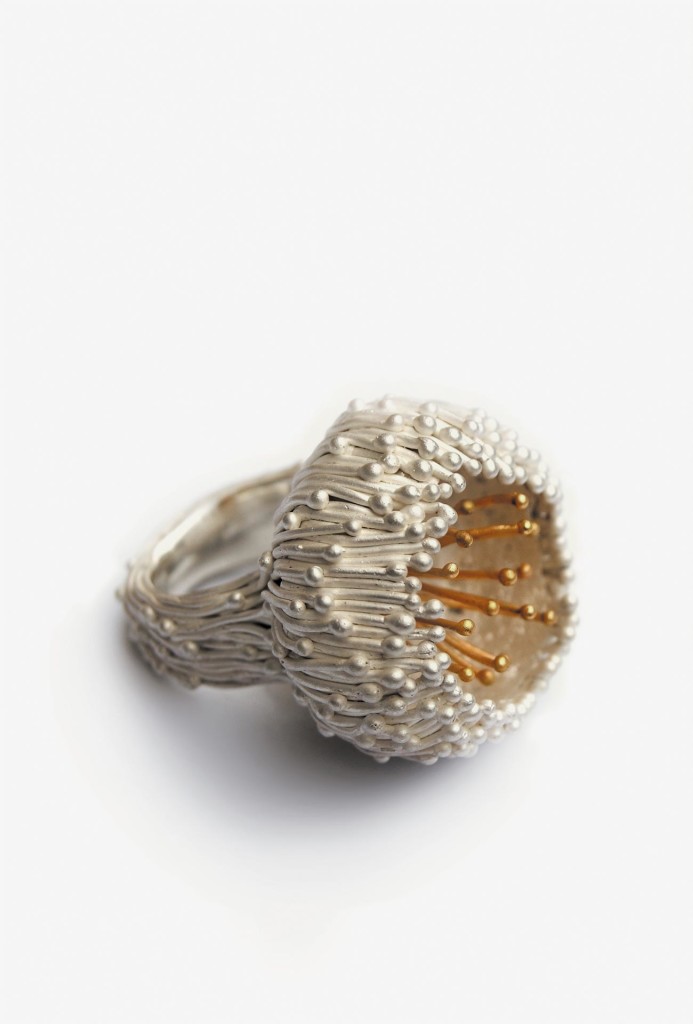 For her cultural present, Stefanie Walkenhorst from the Galerie für Kunst & Design in the jewelry Mecca of Pforzheim selected a ring in Nora Rochel’s Querbeet series. Reducing the components to pistils or stamens results in new organic shapes that refer to blossoms, but are simultaneously imaginative and novel creations. This gallerist’s enthusiasm is sparked by pieces “that look current and topical, yet simultaneously build a bridge to a bygone epoch, a faraway country or to their designer.” A person who wears jewelry can be compared to a pianist, Walkenhorst says, because “when you wear a piece of jewelry, you interpret it. You frame it with the entirety of your personality.” The source of the jewelry is important to her gallery’s clientele, which is why each piece in the showcase is accompanied by a photo and the name of its designer. Purchased items are seldom returned because her customers don’t buy pieces that are merely “trendy” or that “everyone has.” 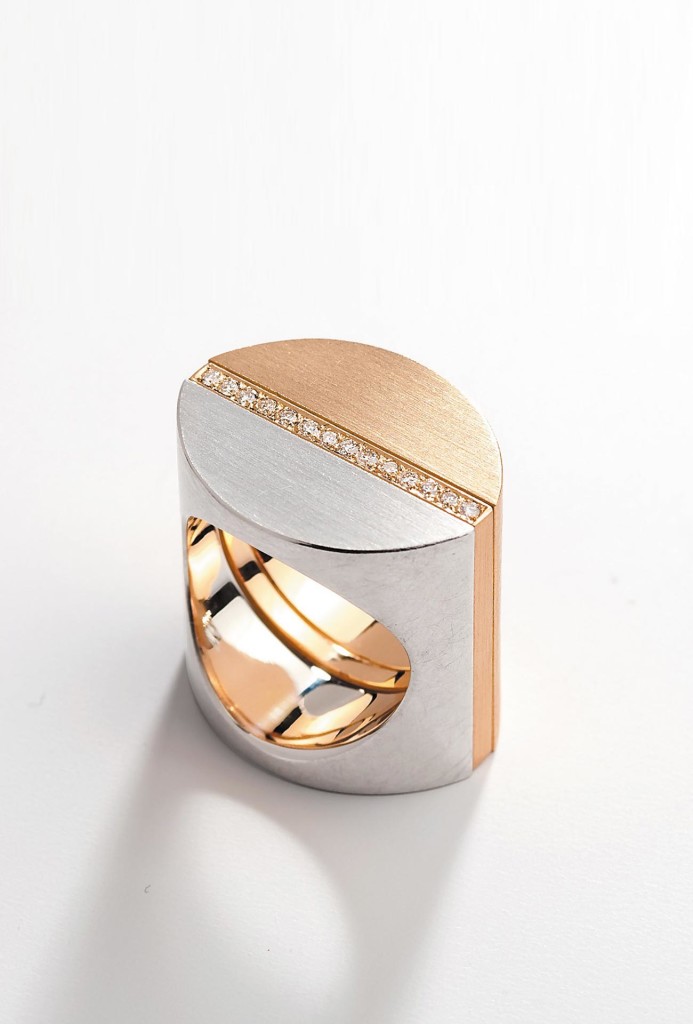 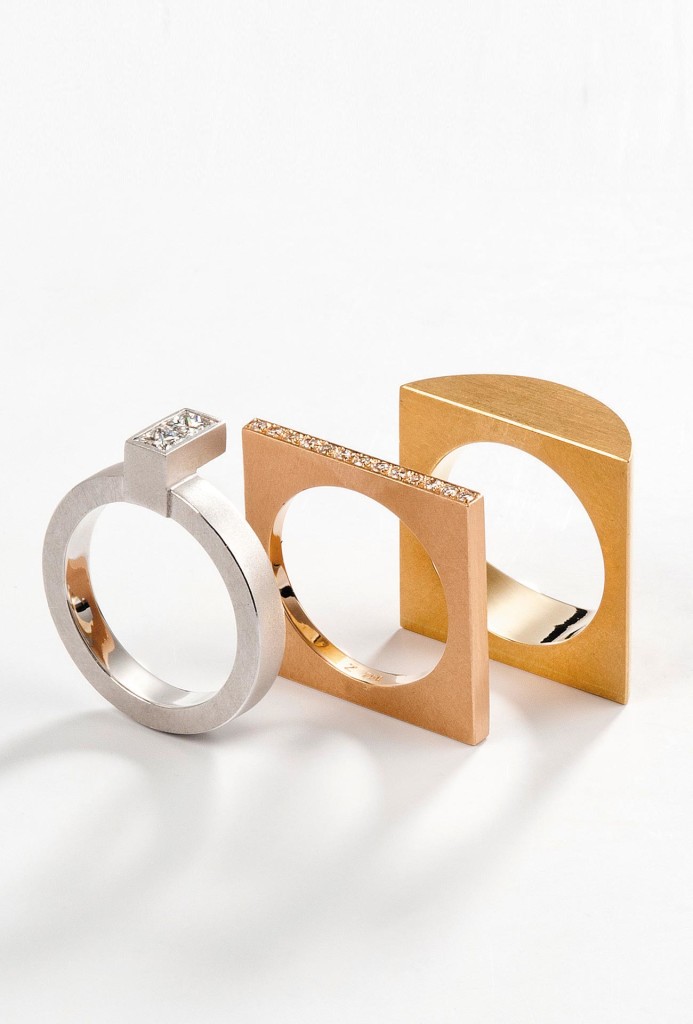 Rings in a disassembled state

Designer Michel Bischoff’s Schichtwechsel [Change of Shift] jewelry collection consists of 30 different, variably combinable elements. The first variants date from the 1990s. Matthias Zimmer says that the Halbrund [Half-Round] model is already a classic and plays a key role. Combining convex and planar surfaces, its individual components can be augmented, interchanged and turned through 90 degrees. “That’s why Halbrund sparks collectors’ passion,” the jeweler explains. Pleasant proportions and palpably good wearability are preserved. “Our Schichtwechsel ring collection primarily acquires its social relevance because our customers appreciate it,” Zimmer says. The collection has won a design award and been purchased by museums. Increasingly many people throughout Germany who love jewelry and are interested in culture and design value forms like these, which wed long-lived contents and the surprising combinatory ability of jewelry rings. 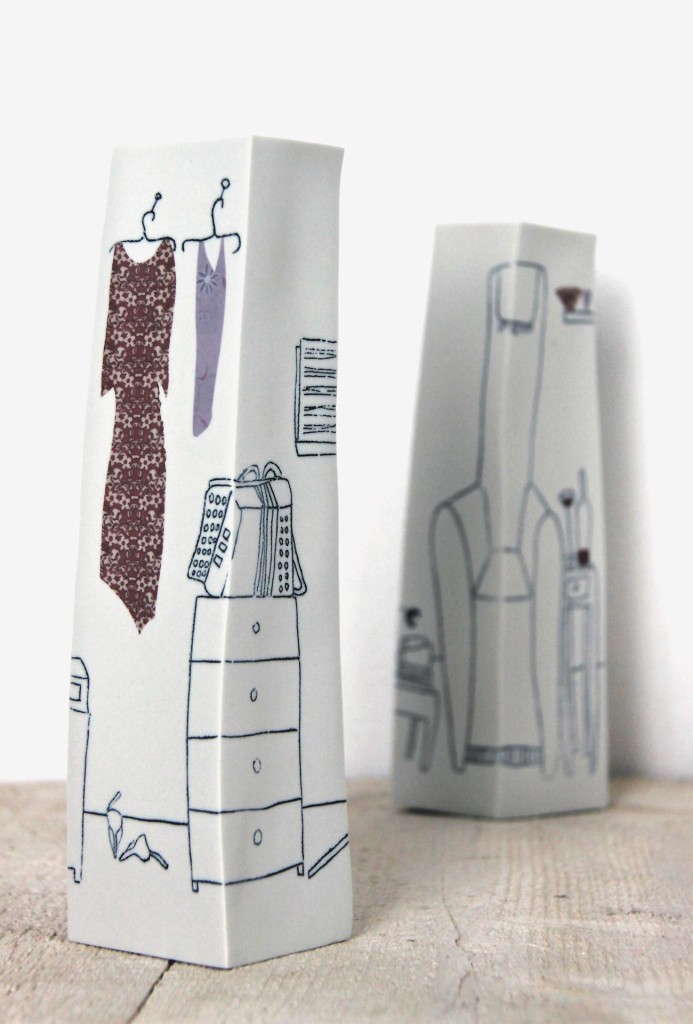 Sandra Häuptli, Inside out vases. Ceramics, engraved and printed 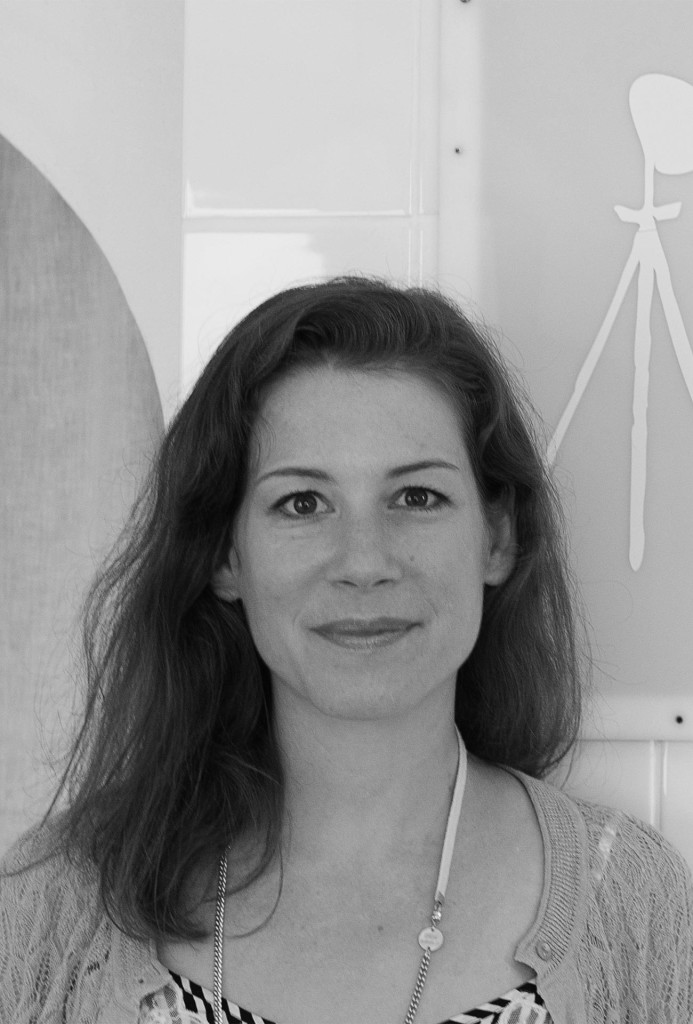 Natalie Ortner, art historian and owner of by noa

Sandra Häuptli’s Inside out vases eternalize interiors. The art historian and proprietor Natalie Ortner likes the idea that “if these vases are unearthed five hundred years from now, they might provide clues about how we lived.” Three firings are needed to fabricate these one-of-a-kind pieces. To prepare for the final firing, the ceramist places items such as her patterned work apron or a Chinese box on a photocopier, captures the décors on paper, and then cuts the papers to shape. “By showing her personal relationship to each motif, Sandra Häuptli highlights the uniqueness of these flower vases,” says Natalie Ortner, who sells applied artworks at trade fairs and via her online shop. Her clientele appreciates the high quality of the handmade objects and her frankness with regard to the provenance and production of these imaginative artifacts. “They create a space in which to share ideas about them—that’s a lovely aspect of my work at by noa.”