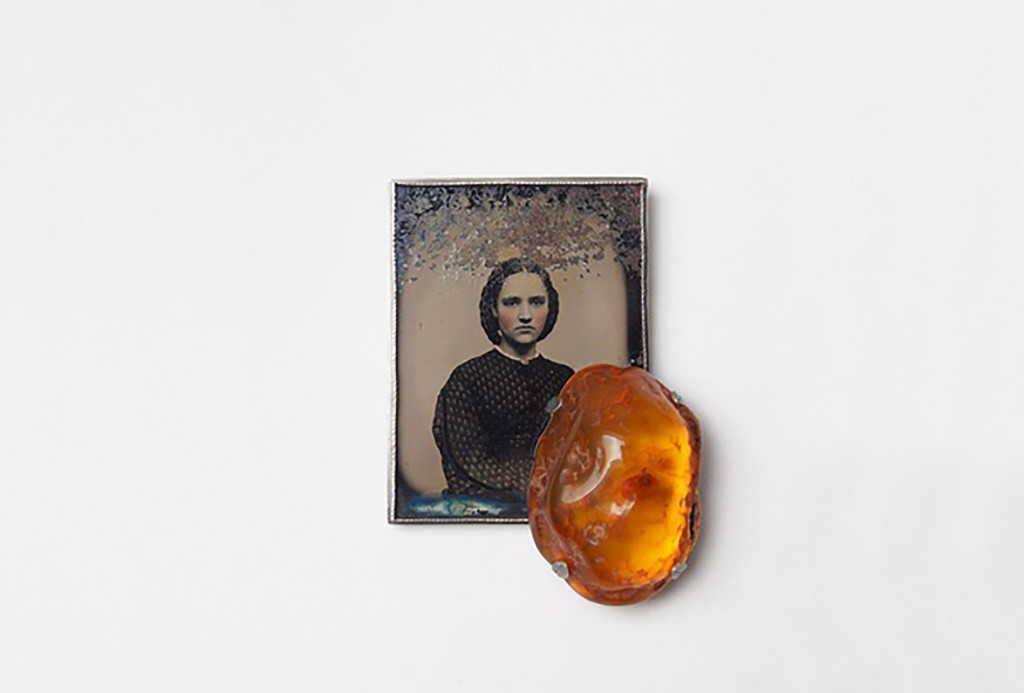 She uses tintypes, the unique photographic images made in the streets and marketplaces of the USA in the 1860s and 70s using a light sensitive emulsion on ferrous metal. Unlike daguerrotypes, they were cheap, instant, lightweight, and involved no precious materials; they democratised portraiture, and were a forerunner of the photo-booth strip, the Polaroid, or the selfie. For Speckner, they are found material bearing the images of anonymous subjects and have the appeal of being both image and object; made of metal and suitable for enlisting to the services of jewellery.

While these images clearly had meaning and associations for their subjects and their contemporary viewers, for Speckner their value is graphic, not emotional. She insists that their use has nothing to do with nostalgia: they are merely objects, bearing images; and while she recognises the symbolic potential of her chosen components, she quite deliberately keeps them open to multiple readings. “It’s not my nostalgia,” she says, “but it may be your association.” The alliance of a vase outline in red Jasper with the image of coarse scrubland on metal may say something about culture and nature, or geometry and imagery, or more formal concerns of colour and mood. She crucially allows scope for new objects and interpretations between the juxtaposed parts: a place for two elements to beget a third meaning, something new.

There is an emphasis on the flatness of the image, a destruction of any illusion of depth. Her stylised vase motifs, not necessarily symmetrical, evidently hand-rendered, are the flattest, least illusionistic references to the vessel it is possible to make. The repeated piercing of a portrait of a young man echoes the outline of the figure, a shadow or trace of movement, but the very act of puncturing the metal firmly breaks any pretence of three-dimensionality and plays once again on the object as subject.

It has been said that Speckner has a surgeon’s touch and a jeweller’s eye.[1] She is in many ways a traditional jeweller, taking satisfaction and delight in techniques and skill, and meticulous methods that fall squarely within the canon of jewellery fabrication. Fixings are highly apparent, but refined: rivets, traditional stone mountings, carefully finished edges. Where she departs from the conventions of fine making it is for confrontational effect; it is ‘perfectly imperfect’. Although the reverse of the works may be seen by few, they may be figured with decorative motifs, set with stones, or have complementary materials to extend the theme and add secret value.