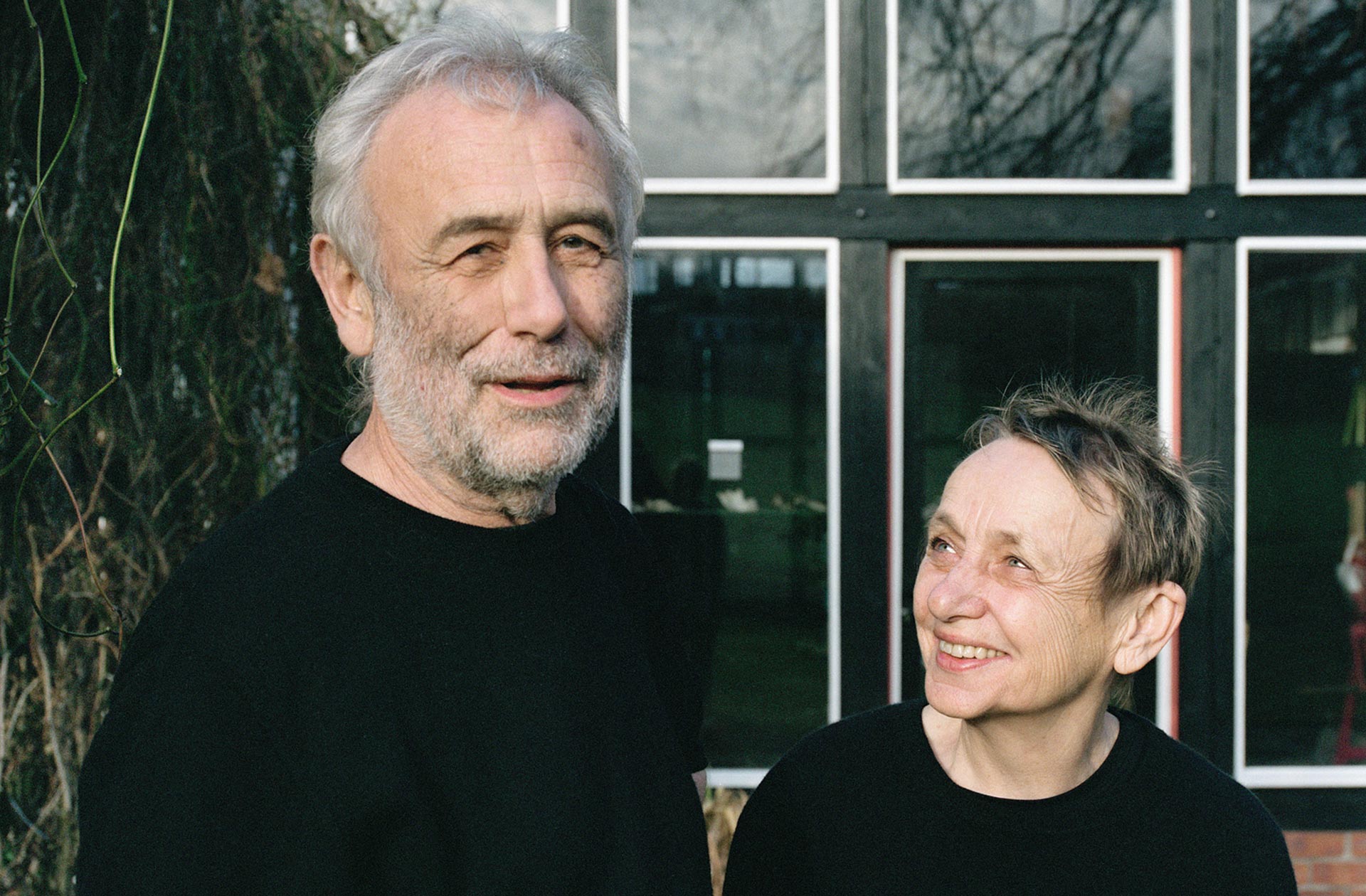 The designer couple in their garden.

As a designer couple, Ulla and Martin Kaufmann are a special case. The specialness begins with parallelisms in their education and shared career, continues with identical stylistic concepts, and culminates in the rare unity of a collaborative oeuvre. Both were born in Hildesheim in 1941. Both underwent traditional training in the goldsmith’s and silversmith’s craft from 1958 to 1962. Both passed the master’s examination. Both are active in an exciting interdisciplinary field of craft, design and art. Asked which of them deserves credit for one innovation or another, they answer: “We do everything together.” Since 1970, they’ve collaboratively transformed a former farmstead on the outskirts of Hildesheim into a place where cuisine and art, holistic living and working can thrive amidst a vegetable garden and a fruit orchard, a residence and a workshop.

To convey a visual impression of this microcosm, Achim Hatzius traveled from Berlin to Hildesheim in December 2013. He and his camera accompanied the Kaufmanns throughout a long and busy day. He shot photos on film that he had kept in a refrigerator for many years. The graininess, the seemingly tinted hues and the black-and-white images transport viewers to an epoch when many photographers swore by personal film material and frequently developed pictures in their own darkrooms. While digitization was making progressively greater inroads in the 1990s, the Kaufmanns wrought their first pieces of gold jewelry, to which they gave such unimposing names as Just Sheet Metal, Mirrored, and Nearly Nothing. 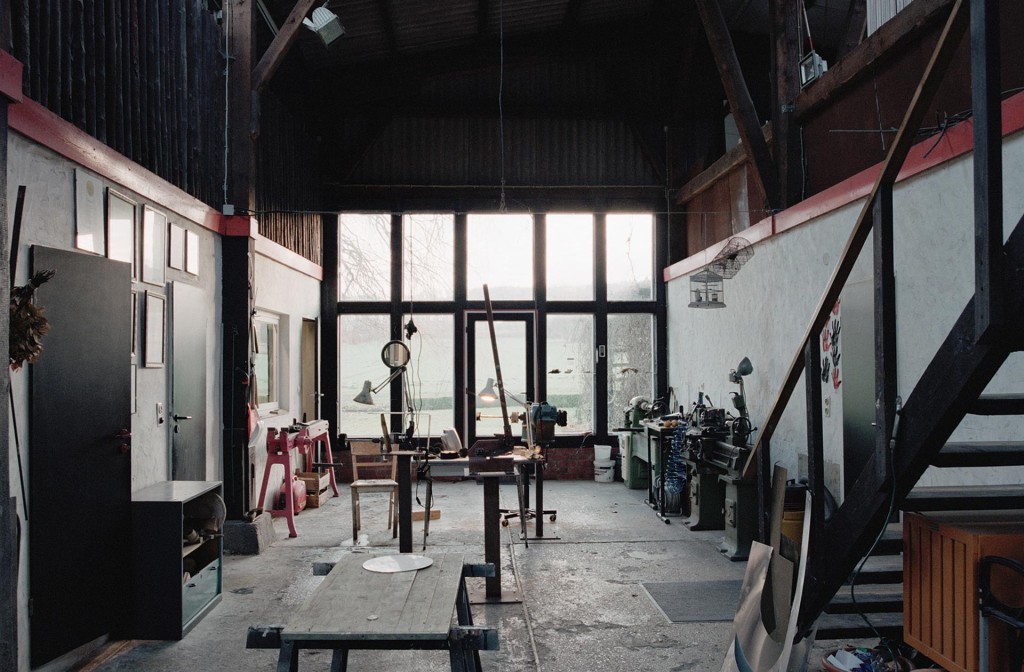 A former barn has been extended to a spacious workshop. 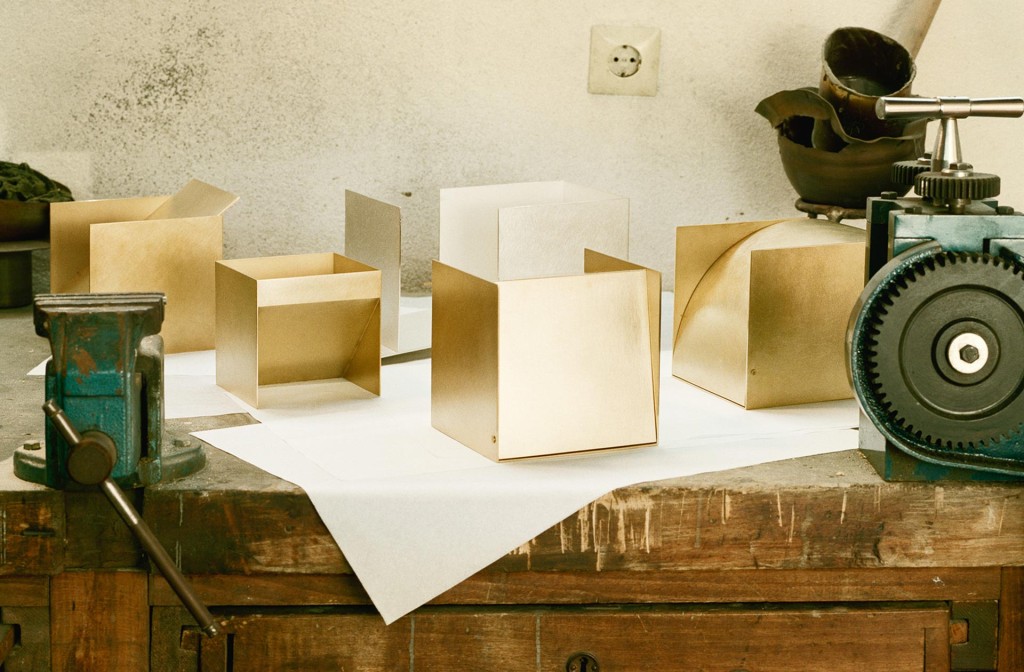 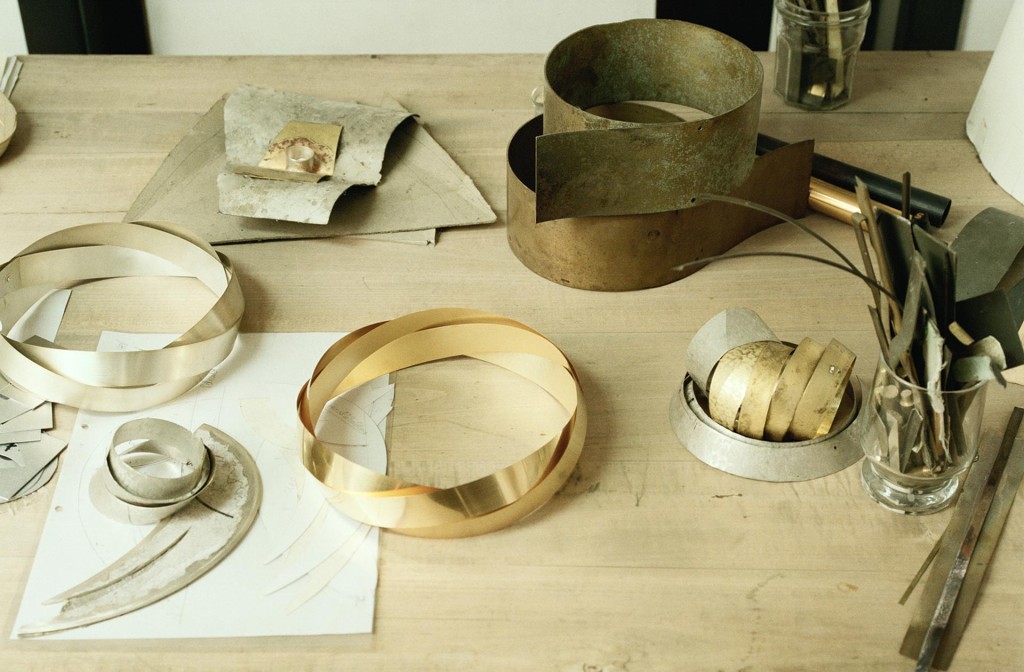 Bangles and bracelets, 2013. Silver and Gold. 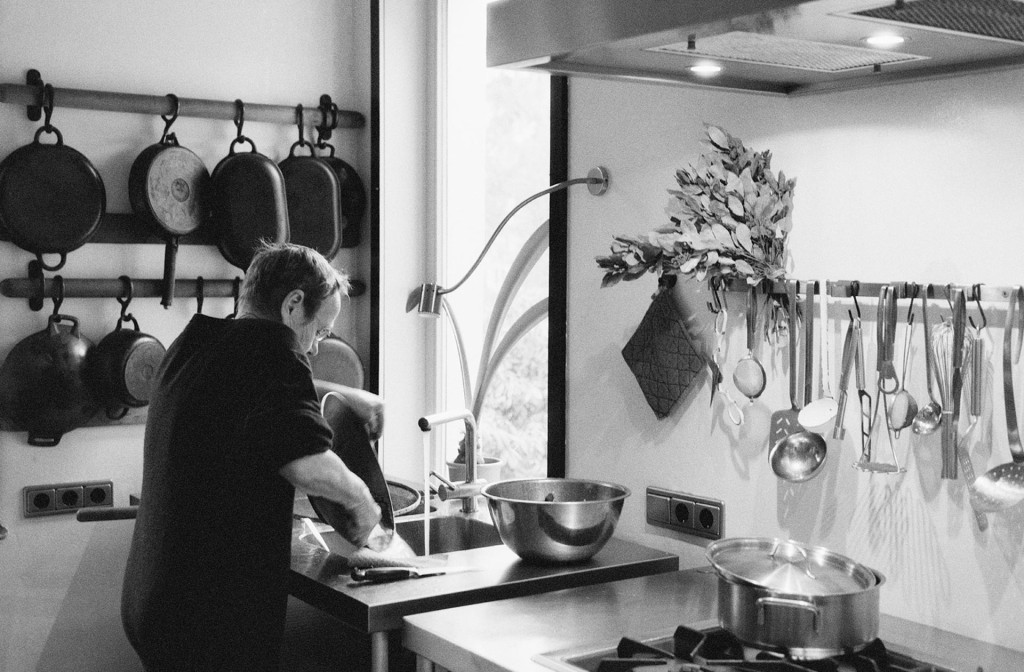 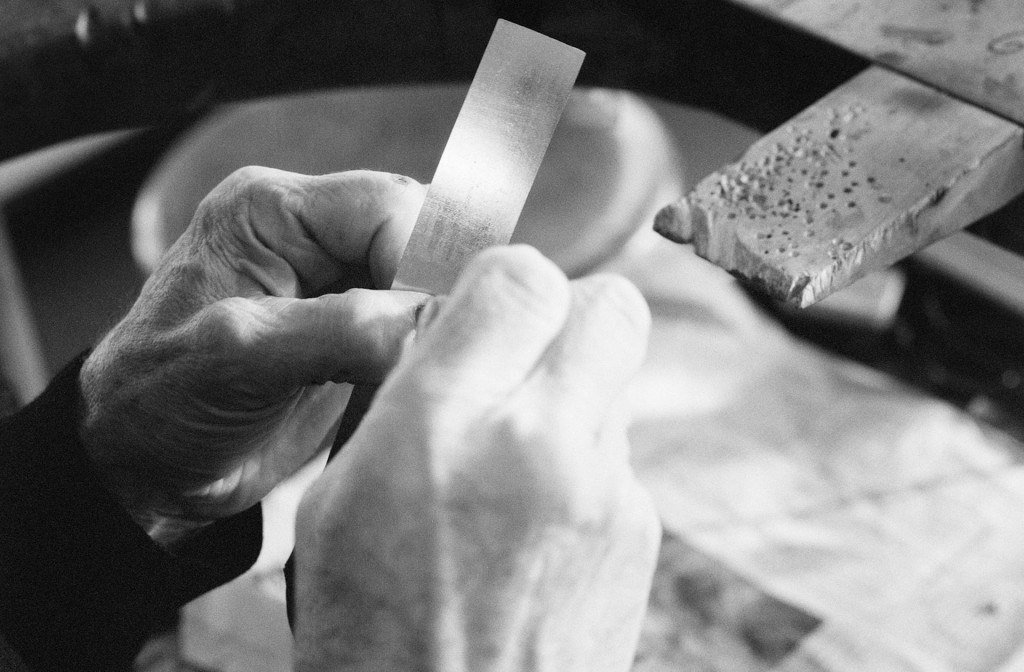 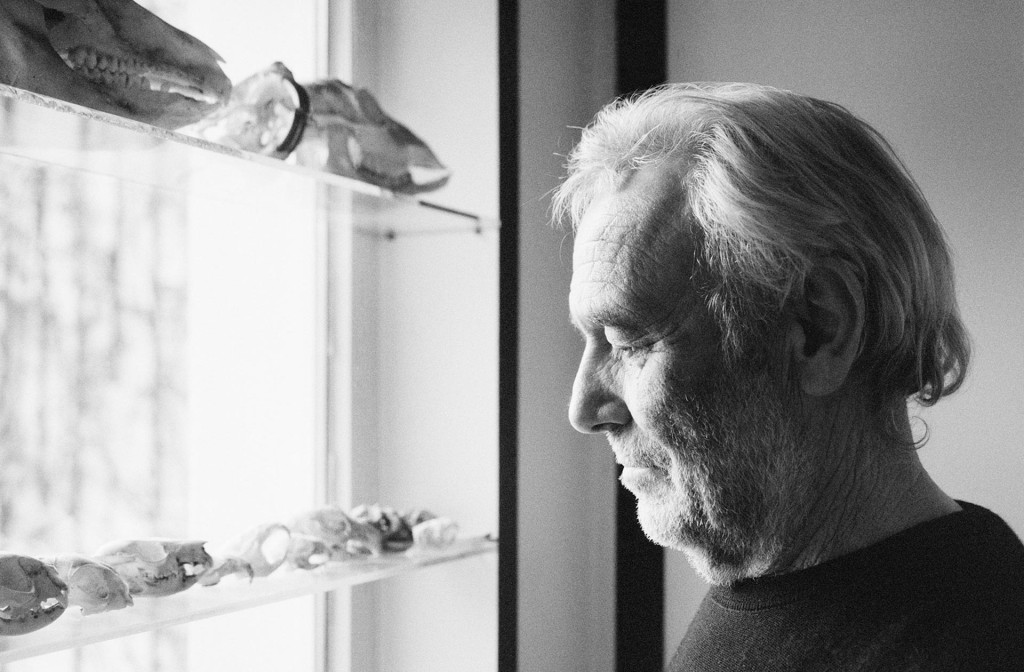 Perhaps the most apt description appears in a catalogue entitled “Sequences: 1999 – 2004.” The piece, a hoop for the neck and wrist, was wrought by hand in the course of two days of work. Dr. Eva Maria Hoyer, the director of the Grassi Museum in Leipzig, writes: “Ulla and Martin Kaufmann named their multiply prizewinning hoop necklace Nearly Nothing. A wrought band of matte gleaming gold – and nothing more. No clasp. No superfluous ornamentation. Absolute minimalism. Like a springy elastic shaving, the slim hoop wraps flatteringly and with enchanting simplicity around its wearer’s neck as though it were uniting with her to become part of her identity. Anyone who has donned this necklace and felt the feeling will never want to take it off again.”

The Kaufmanns, who have regularly exhibited at the Grassi trade fair in Leipzig for many years, had a surprise up their sleeves for the most recent fair. Alongside their well-known minimalist pieces, the designer couple unveiled new silver hoops for the neck and the wrist. Their gleaming opulence makes them seem unfamiliar, but they simultaneously represent a logical evolution of previous, simpler pieces. This new jewelry for the neck and wrist is noticeably thinner, broader and longer than the familiar pieces. Describing their clientele’s initial responses, Ulla and Martin Kaufmann say: “The idea’s simplicity combines with the material’s presence to create an opulent and fascinating effect.” The logical next step, they add, was to manifest this new shape in gold too. 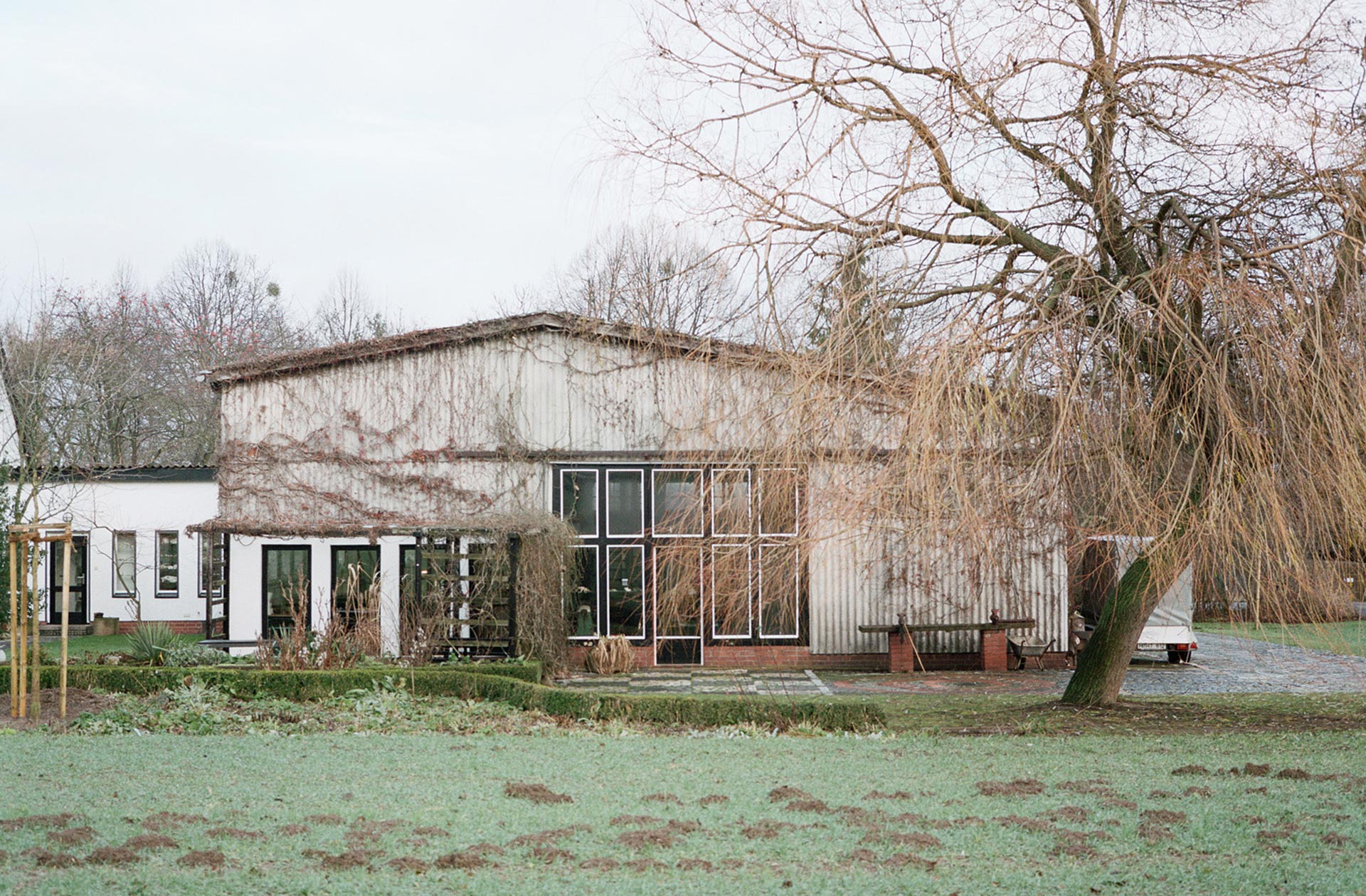 The Kaufmann’s house and workshop in Hildesheim.

Asked what it is about gold as a material that has fascinated them for so many years, the goldsmith and silversmith couple from Hildesheim answers with characteristic terseness and pertinence: “It’s the persuasive power of the golden color and the plasticity of the material.” Like numerous other ambitious goldsmiths of their generation, their work with colored plastic in the 1970s was not unsuccessful, but the material ultimately wasn’t enough for them over the long term. “In part because the potentials of the material’s malleability were rather limited,” they explain in retrospect. A twofold question remains for Ulla and Martin Kaufmann: Who wears these hoops for the neck and wrist, and what do these pieces express? “Our jewelry is worn by self-assured individuals who act with confidence and independence: pragmatic idealists and hedonistic materialists.”

We look more closely at these two concepts. According to a study by Shell, the nonmaterial side of life occupies the foreground for a “pragmatic idealist,” while a “hedonistic materialist” believes that the goal of his or her life is simply to achieve a high standard of living. Hedonism as the philosophy of individual pleasure has been well known since classical antiquity. Both notions – the one espoused by the pragmatic idealist and the other by the hedonistic materialist or “hedomat – arose in the context of discussions about the change in values since the late 1980s. The Kaufmanns were clearly ahead of their time.