Whatever Ata Macias tackles, he turns it into gold. Whether as a DJ, club owner or restaurateur, this bearded son of Spanish-Greek parents is successful and enjoys cult status. His Robert Johnson techno club, opened in Offenbach in 1999, is legendary. With his Café Plank and his Club Michel, he has turned Frankfurt’s main station district into a hip neighborhood. This alone would be enough to dedicate an exhibition to the Ata phenomenon. But with its Give Love Back exhibition, the MAK Frankfurt is pursuing higher goals. 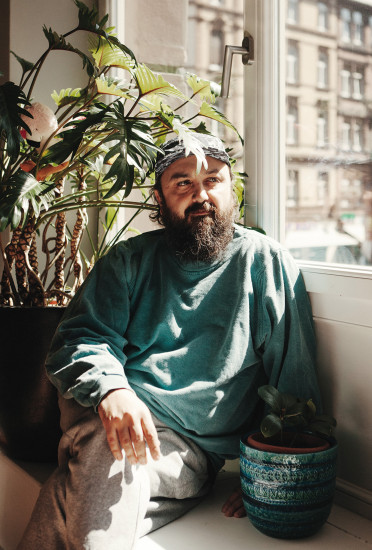 The exhibition about Ata and friends explores the question of what the applied arts can be nowadays. The curators Eva Linhart and Mahret Kupka regard them as something that is revealed not so much by the material objects themselves, but instead by their application. So the applied arts can basically be anything, including everything that Ata has ever got involved in. Showcasing a DJ’s and club owner’s lifestyle as an exhibit in a museum? Even Ata himself needed to be convinced of this idea by the curators’ arguments in favor of this project: “Ata is somebody who, by re-combining things, creates spaces and objects and designs living environments, thereby initiating projects and processes that constitute the very nature of the applied arts.” Aha!

What visitors will find is a wide variety of colorful objects: posters, wallets, Moroccan peppermint tea etc., created, arranged or selected by Ata himself and exhibited in the Richard Meier building. Record covers and furniture from Ata’s cafés and clubs testify to his role as a DJ and creative entrepreneur, while electronic music is playing in the background. But there are also historical drinking glasses from the museum’s collection. Ata has arranged them in juxtaposition with his own publications from his time as a publisher and book designer – yes, he even did that way back when – and with Christoph Keller’s fruit brandies to form a “library of the exquisite”. At any rate, this exhibition is an ingeniously inventive attempt to rejuvenate the MAK according to the motto of “If young people would rather go to a club than visit an exhibition, the DJ simply has to come to the museum.”