Japan Art is located in the gallery district of Frankfurt’s Old Town, opposite the Museum of Modern Art. It is one of the few art galleries in Germany that exhibits both fine and applied art on a high level. Since the death of the gallery’s founder Friedrich Müller in May 2007, his wife Christa and their two sons Marcus and Alexander have been responsible for the program. An exhibition featuring works by ceramic artist Shozo Michikawa continues until July 17, 2021.

Shozo Michikawa was born in a nature park near the active volcano Usu on the island of Hokkaido in northern Japan in 1953. He initially pursued a career in business before coming to ceramics via evening classes. In Seto, one of Japan’s most famous ceramics towns, he first worked in a ceramics factory before developing his own technique and a sculptural formal language based on it. Michikawa has ranked among his country’s most important ceramic artists for many years. His works have been exhibited worldwide and are represented in important public collections. We asked Marcus Müller about the concept of the gallery and the current exhibition.

Shozo Michikawa, sculptural form, 2020. Stoneware, glaze tanka with silver, 43 x 16.5 cm. The black coloration is caused by coal in the saggar. Then the silver glaze is applied and the ceramic is fired again at low temperature in the gas kiln.

AA What is special about Shozo Michikawa’s works and what do you personally appreciate about them?

MM What I appreciate about Shozo Michikawa’s work is the particular sculptural forms and structures that he creates with his unique fabrication technique. Also appealing are his energetic, broken-open forms with their many cracks and crevices, some of which go all the way through the piece. These fissures result from the dynamics of the rotating potter’s wheel. The creation of his works is also often associated with the forces of nature, comparable to cliffs shaped by natural forces.

AA Two seemingly opposing tendencies characterize the culture of Japanese ceramics. The utilitarian pottery, which is influenced primarily by China, tends to be simple and elegant. The other tendency, which is influenced by Zen Buddhism and Shintoism, seeks to express the character of the material and animate nature, as Shozo Michikawa does with his unique technique. Could you also say something about his firing techniques and glazes?

MM Natural ash glaze creates impressive discolorations when the pieces are fired in the anagama, i.e. the Japanese single-chamber kiln. Equally fascinating are the elegant black and silver “Tanka” and white “Kohiki” pieces, which aremolded via the same technique and subsequently fired in a gas kiln. In other works, calligraphic-looking accents applied are added with iron oxide.

AA Shozo Michikawa is also a very communicative and entertaining artist who makes no secrets about his technique and likes to demonstrate it in public. This can be seen, for example, in a video demonstration that he gave at the Museum Angewandte Kunst in Frankfurt in 2018. The link can be found on your website. That demonstration impressively shows how fundamentally important Michikawa’s self-developed technique and craftsmanship are. In Germany, at least, artisanal aspects in art are almost considered a flaw that people prefer not to talk about. How do you view this? And is it also a topic in conversations with your gallery’s customers? 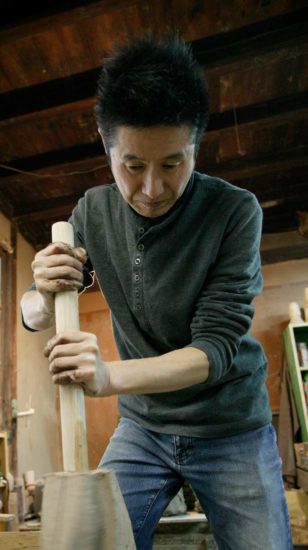 Often with the help of a stick, Shozo Michikawa forms his impressive sculptures from clay.

MM Technique plays an important role in every work of art that’s created by hand. We accordingly regard the artisanal aspects as integral to the creation of every artwork. Our visitors often ask us about the process of creation or the technique, and we are happy to explain everything we know about it. In Japan, by the way, the separation of art and craft does not exist as it does in Europe.

AA There is a somewhat long but very eloquent sentence in your gallery’s profile: “In his constant search for the ‘art’ in simple things – for a certain radiance and soulfulness that transcends subjective, transient appeal, that is universally accessible, and that touches the beholder and remains alive – Friedrich Müller has succeeded in finding objects with aesthetic, cultural and historical backgrounds.” This enthusiasm prompted your father to found the Japan Art gallery in 1977. Half a century has passed since the 1970s. How valid and how important does that statement seem to you today?

MM That affirmation remains centrally important to us today – because quality, reduction to the essentials and timeless aesthetics in art continue to inspire us and are important selection criteria for us. This applies to the early folk-art Mingei works as well as to the contemporary works that we exhibit.